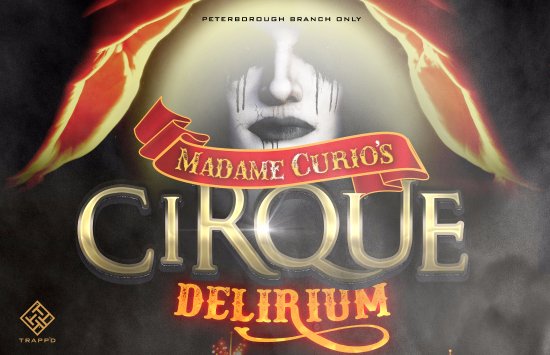 Trapp’d Peterborough is another one of those companies that have chosen an unusual entertainment-related venue for their games – in this case a greyhound track. That parent venue felt perfect for this kind of activity, because it can sit underneath the stadium and there’s plenty of parking available (although presumably not on race days!).

There’s a huge room to greet you when you arrive – easily big enough to fit in a typical London escape game – and, while it’s not the most inviting of spaces, they make up for it with a warm welcome from the staff. While I no longer judge a game by its name (I recently had a bad experience elsewhere), I was definitely attracted by Madame Curio’s Cirque Delirium’s title. It conjured up images of mystery, confusion and intrigue that made me keen to find out more.

“Roll up, roll up! Enter the mind meddling spectacle that is ‘Madame Curio’s Cirque Delirium’! Try your luck, prove your skills and test your aim… can you conquer our unusual carnival games? How about attending a captivating performance in our very own circus ring? A delightful fun-filled evening where our guests pile in, hoping to glimpse the circus’ famed attractions and maybe win a prize or two. Don’t believe us? Come and see for yourself! There’s so much fun to be had in our big top phenomenon!”

The poster seems intriguing but you get this niggling suspicion that all is not exactly what it seems. Since this circus came to town people have started disappearing. Guests supposedly enter the circus, but very few come out and people seem to whisper of a ‘ghostly aura’ surrounding the circus itself. Still, your attention has been caught and curiosity is getting the better of you. You decide to go along and see what it’s all about… besides, you’ve never been particularly superstitious…

After entering, it’s all fun and games until you start to notice the abnormal silence among the workers. They seem to labour along in a zombie-like state, almost like mind slaves. They don’t blink or speak to anyone – not even each other. It isn’t until you recognise a stamp on one of their hands for Madame Curio’s fortune tent that you notice they all have the same distinguishing stamp. A quick glance towards the sage’s tent tells you that passers-by are being reluctantly coerced into entering… and they never seem to emerge. Something rather sinister is happening and you realise that you could be next. The circus closes in 60 minutes and you can’t see an exit anywhere. Maybe they blocked it off? You need to find another way out of this circus nightmare before Madame Curio steals your mind and you remain Trapp’d in the circus forever!

The room’s title had given me a very clear picture of this game, but would it live up to that vision? In short, no. But not in a bad way. It definitely felt like a circus but, instead of the fortune teller-style tent that my brain had imagined, it was more of a fun-fair, side-show effect, with lots of games on offer. It’s bright and in your face as befits the theme, but it nevertheless draws you in, in our case instantly scattering the team as each member found a challenge to pit themselves against.

And that’s very much the way this game works: not with puzzles (although there are definitely some of those) but with challenges. By that, I mean that often the task we needed to complete was obvious but actually tricky to complete. For example, there were several of what I’d call skill-based hurdles to overcome. Now, speaking personally, I don’t think any of them were unfair: we had unlimited goes on all but one of them, and I’d expect most people to be able to progress without too much trouble. However, if that kind of thing is going to frustrate you, this may not be the right game for you.  On the one challenge that offered limited turns, there was a second way to achieve the end goal if necessary so, if you do lack the necessary skills, the GM should still be able to guide you to the finish line.

Unfortunately, one of those challenges was broken when we visited (which was surprising, as it felt that a resolution would have been straightforward to implement). The result was us spending an inordinate amount of time – and certainly longer than we would have spent on it had it been working properly – completing a puzzle that turned out to be pointless. Fortunately it was a pretty fun part of the experience, and that was still true even with the breakage, so we didn’t mind too much.

The searching here is on the tough side, resulting in us being caught out a couple of times by carelessness and lack of observation. In a game that combined a small amount of physical skill, little by way of real puzzles and fairly hard searches, it’s perhaps unsurprising that this was our downfall. That searching, added to the skill-based challenges, led to a game that was incredibly open to start with: we could easily have had five people fully occupied. However, the game became increasingly linear as it progressed, leaving me a bit frustrated at times.

There wasn’t a huge amount of story beyond needing to escape the circus, but there was at least a sense of progress, which they had created in a variety of ways: completing some very obvious challenges, collecting specific tokens, and a real sense of exploration through the room. In addition, there were a couple of fun transitions between parts of the game that, in my opinion, particularly added to the experience.  They’ve managed to add a layer of creepiness alongside a neat way of doing away with some of the locks that they might otherwise have needed.

The finale was a fun, physical ending that saw us racing back through the room, perfectly rounding off the game.

We escaped in 47 minutes having taken a couple of clues, which came over the walkie-talkie. Note that we chose to go quite slowly so that the whole team would get to participate in everything, so don’t take that time as suggesting that it’s very difficult.

This was quite different from your typical escape room, so it’s hard to say whether you’ll enjoy it. There’s less puzzling and more skill challenges, which I can see putting some people off but drawing more people in. In particular, it’s a great entry point for people who are a little dubious about escape rooms: they’ll understand what to do straightaway and they’ll have plenty of fun.

We played as a four, which worked fine, although a couple of times it did feel like we were blocking each other a little. If you’re taking it seriously, you could complete this with just a couple of people but, personally, I think this game is best enjoyed in a fun group – challenge each other at the skill-based games, have fun in the places where it’s pure joy and generally forget about it being an escape room and just think of it as a playground for the big kid in you!