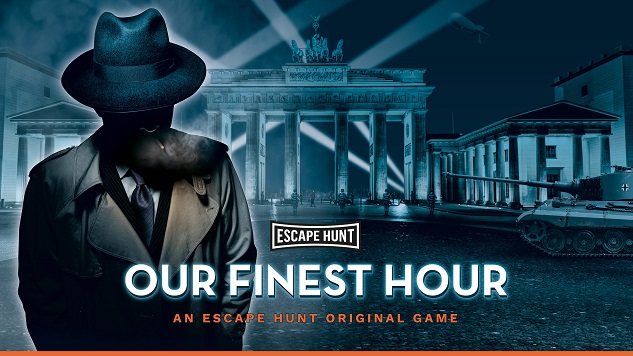 Having been impressed by the first game we’d played at Escape Hunt Leeds, we were excited to see what Our Finest Hour would be like. Our GM was the same as we’d had for the first room and, as before, he GM’d character. It’s a small point, but that kind of “in-character” briefing, done well, can really help to kickstart the game, and the ad-libbing for hints that followed added a bit of immersion – and at times even humour – to our experience.

Step into 1942, when the world is at war. The Nazis have developed a series of devastating new superweapons that could obliterate Britain and win the war at a stroke. As MI6’s top agents you’ve been chosen to find and destroy these fiendish inventions before they destroy us. The latest news from HQ is that the superweapons are primed and ready to launch, so you have precisely 60 minutes to discover their location, destroy them and save Britain.

The stakes couldn’t be higher – take too long and there won’t be any Britain left to save.

At first glance, it’s a pretty dreary room: an office-like environment with a sombre feeling appropriate for wartime. That’s not a particular negative – it fits the theme – but it meant that other aspects of the game had to draw us into the action. Fortunately, there was plenty to investigate and some easy-to-crack puzzles, so we quickly found ourselves moving forward with the game. That was partly because the initial puzzles weren’t particularly novel, but they were logical and provided a nice introduction for beginners once you’d found your starting point.

From then on, it was a solid stream of challenges that never threatened to overwhelm us but still kept us reasonably busy. The new Escape Hunt rooms seem to be pretty good at delivering a good puzzle experience, with the logic in the games never disappointing.

That isn’t to say that we didn’t feel frustration. In particular, there was a centrepiece puzzle with a somewhat confusing input mechanism. It took us a while to work out what we had to do but, when we did, it was a satisfying solve. Unfortunately, the tech behind it is a little temperamental, which left us with garbled output.

Once we had that garbled answer, it was plausible to think that it might need to be decrypted and, in a wartime room, you’ll not be surprised to find out that we had various ideas of how to decrypt it. That’s unfortunate, but it underlines how important it is to make tech work, as in this occasion we ended up heading down a bit of a rabbit hole that adversely affected our experience.

As the game progressed, that initial sense of the room not being visually exciting continued, with the exceptions of the centrepiece mentioned above and another one near the end of the game. The fact that they’d stuck so carefully to their theme made it all the more surprising when they included a high-tech component that absolutely didn’t fit with the era of the game. I get why they found it appealing – it provides something that in a sense feels quite thematic – but that cool interaction breaks the immersion. Purists be warned!

Having played around with the temperamental tech earlier in the game, it felt like we were running short of time as we got to the final set of puzzles. I was all set for a (slightly!) tense finale as we rushed to complete the game and saw the fruit of our labour. In the end, though, it was over almost as soon as it had begun. There were a couple of good ideas in the finale sequence, but it felt to me like it wasn’t the polished experience that the rest of the venue had been. Where other parts of the game had had interesting puzzles, this seemed too straightforward and took the edge off the final moments of excitement.

We escaped in 40 minutes having had a couple of clues. As mentioned above, these were given in character and at times had me laughing out loud.

Our Finest Hour was a solid game but one which, for me, never really took off: temperamental tech in the middle, use of technology that looked out of place for the theme, and a finale that was a bit flat. Nothing that made the experience terrible, but just enough to take the edge off it: I had fun but nowhere near as much as I’d had in the Samurai game.

We played as a two and got through with plenty of time to spare, so I think enthusiasts can safely head along as a pair, although I wouldn’t be worried about taking three. Beginners will probably want to take a bigger group to allow for plenty of discussion when they’re stuck, but be aware that some parts of the game will get a little bit congested at times.