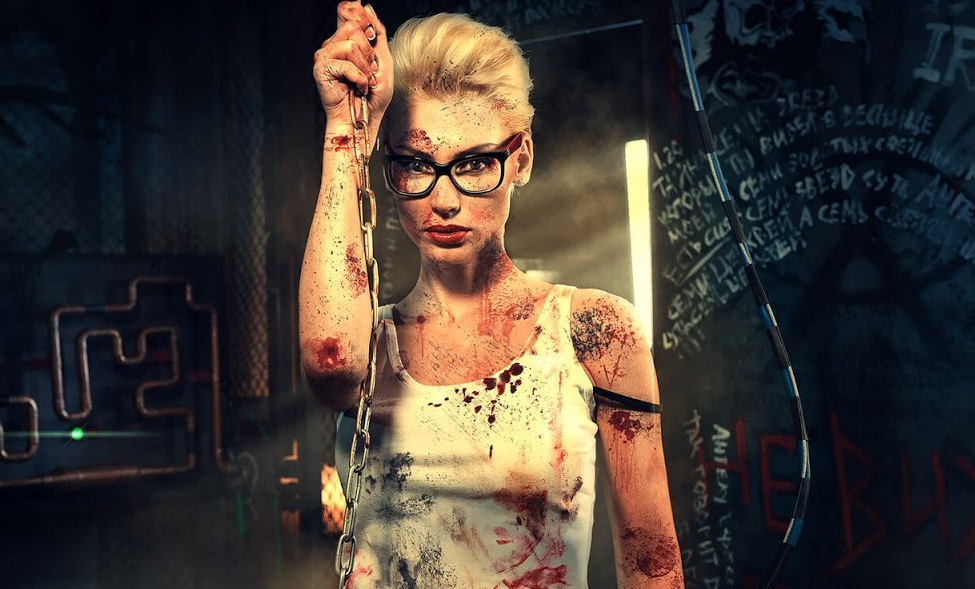 After a quiet few months on the London escape room scene, AIM Escape is one of a new generation of escape rooms opening up in the capital. With its beautiful, minimalist reception area, this is at first glance a very corporate venue set just outside the City. It’s not as simple as that, though: they’ve got a range of games here that suggests they’re trying to corner every market, not only with the horror game we were about to play but also with a futuristic sci-fi room, a Hangover-themed room which feels like it may appeal to stag and hen dos, and even a kids’ spy game.

We visited a couple of weeks after they’d opened their doors, so they were just putting on the finishing touches to the waiting area, but even then it looked impressive. We were greeted by our GM as well as two of the owners, who chatted about their experiences of playing UK escape rooms, where they’d seen an obvious gap between what was available here and the more impressive offerings in Russia.

There’s a short briefing outside the room to give you an overview of the story before you’re given a keycard that gives you access to the room. At the time, I felt that was a little bit strange but, in retrospect, I think it subtly reinforces that this is an automated room rather than something where the GM is driving the action.

You open your eyes, head pounding. In the dim light you can just make out the room – nightmarish visions of blood splatter on the wall, instruments of torture surround you, the feeling of an ominous presence close by. This isn’t just a room, this is a sick game. Your only chance of survival is keep your wits about you and solve the hellish puzzles to escape the maniacs maze. Will you break free? Or will you become another one of his victims… The perfect escape room for horror lovers and adrenaline junkies, this experience is sure to get your heart rate going. With a real crematorium and buckets of blood you won’t be disappointed.

Oh wow, was it dark. The theming of this room means that darkness is a natural part of the experience, but I really hadn’t expected it to extend through so much of the game. There were large swathes of this room where it was hard to see very much, and we were constantly feeling around to work out what was going on. I’m not entirely against darkness but, if you’re going to make use of it in your room, then you need to be very careful choosing the puzzles, and it didn’t feel like such care had been taken here.

So, how did it affect the experience? Well, firstly, there’s a significant search element to this game, and searching in the dark is painful. We missed a couple of items because we didn’t do a proper fingertip search of the whole space. Secondly, part of the room has thematically rough pieces of metal. In the light, that would have been fine, but in the dark it was unpleasant to search through as we dragged our hands across rough edges. Finally – and the really painful part – was that they made use of colour puzzles where the three of us were entirely unable to see both the colours of specific items and the colours that we were meant to use to decode them. For me, this room would be significantly better if you found a torch early in the experience, even if it was only one.

Usually darkness also signifies that the room won’t impress visually. Here, however, while things were bare at times, there were several places where they’d clearly gone to some effort to implement the theme, even if it wouldn’t be fully appreciated. It obviously wasn’t a pleasant place to be (what kind of a serial killer’s lair would be?), but it felt well constructed.

In addition to the visuals and low lighting, there was a background audio track to add to our discomfort and leave players generally unsettled. That worked well, but the flip side was that the audio drowned out some of the clues we received. On a couple of occasions we had to ask for clues to be repeated, which is always detrimental to immersion.

Lighting issues aside, the game had a strong set of puzzles. At times they could have done with just a fraction more signposting of what to do and which puzzles were on offer, but overall they did a good job. I was particularly pleased with their choice of physical puzzles, which I think will appeal to almost all players. The difficulty level on one of them was probably set a little too high, but some persistence will get most teams there in the end.

The one puzzle that I really didn’t get on well with was a challenge in the middle that was made particularly painful by the lack of pens and paper in the room. That, plus a long code and significant uncertainty over whether we were taking the right path, left what should have been a good puzzle feeling like a negative. A little more signposting would have worked wonders to make things smoother.

Once we’d overcome the final painful search of the room, we were on to the end game. It’s a potentially impressive ending, but it’s a little bit slower than would be ideal for the dramatic effect that I think the game deserves. Great idea but not so great execution. It’s also so obviously the end of the game that we were almost surprised to find just a little more to go. This is a genuine escape room – expect to leave the room to complete the game.

We finished in around 55 minutes having had a few clues along the way for search fails. Clues came in the form of audio from our captor.

This room had the potential to be very good, but it felt like it needed to have a fair number of rough edges fixed up. The finale could do with some rework to get maximum impact, and the audio and lighting both need plenty of work to find the right level, in particular with regard to the colour puzzles. That said, there’s a solid set of challenges here, with some real crowd-pleasers, so I suspect they’ll do well with the majority of visitors.

We went along with three people, and that or one more enthusiast felt like a good level for the room. We certainly didn’t feel like we were short of puzzles to attack.