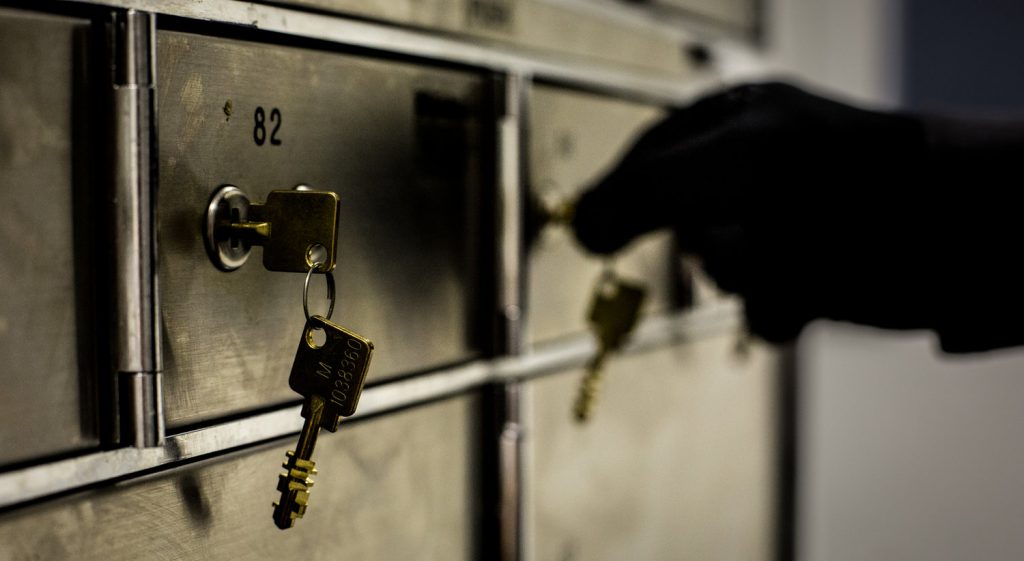 Having raced through the Aviator’s Study, our second game at Escape Room Hull was set to be a trickier affair where we expected to spend almost the full hour inside. Instead of the usual escape-as-quick-as-you-can, this was a collect-as-much-as-you-can experience with a couple of bonus items on offer that made it sound like it would be a genuine challenge – only a handful of teams had maxed out and got both bonuses.

As you’d expect in a proper heist game, you go in with a suitcase so you can take the proceeds home. On top of that, they give you a couple of other things in that bag to get you started.

The Bank Job gives players the opportunity to pull off the ultimate robbery. Not for the faint hearted, teams can pit their wits against a range of puzzles and overcome a series of challenges in order to crack the safe and grab the loot. The Bank Job tests mental, physical and lateral-thinking skills as teams have one hour to grab the largest possible haul. Groups of would-be master criminals need to operate as a one, delegating tasks and helping each other out. Just make sure you get out before the Old Bill arrives!

I really liked the fact that you carried something into the bank. That always appeals to me, but here more than in most games because it just wouldn’t make sense to enter a heist without something in which to take home the money. They also had a nice mechanic to start you off, telling us that there were two starting puzzles that we’d need to solve to proceed. As a result of being told this, we automatically split into two pairs for the start of the game, which avoided the problem of people milling around not having really got involved with any puzzles because they didn’t know where to start – no such concerns here!

And that opening stream of puzzles extended and extended. It quickly became apparent that there were a LOT of puzzles to get through and, even once we were in the vault itself, there was no sign of it abating. Many of the puzzles were on theme – either related to banking in some way or, even better, plausible steps you might take in order to rob a bank. But by no means all: some were tropes, and a couple were of a type that I really don’t like in escape rooms. You can get away with that in this kind of game – it’s not about every puzzle being high quality so much as about having a constant stream of puzzles to complete.

One complaint I have with many vault games is that you barely get to touch the vaults – one or two safety deposit boxes and you’re done. Without wishing to give away spoilers, that’s not a concern here. There are plenty of things to break into, and I doubt you’ll feel shortchanged. Another aspect of the design that appealed to me was that they often used one puzzle to unlock multiple boxes – that kept the team busy and involved. In fact, the real highlight of this game was halfway through the vault stage when I suddenly felt like I was in a heist film. We were buzzing back and forth, solving puzzles, grabbing security boxes, pocketing the cash. It didn’t matter what role we were doing: all that mattered was that we had a job to do and we were doing it as efficiently as possible. It’s moments like that which really impress.

There wasn’t really a finale to this game, other than running through the door with the briefcase. If it weren’t for the bonus items, that would have worked well, but we sat for ten minutes at the end trying to solve those two additional puzzles. By the time we’d managed it, the adrenaline had died down a little, so the finale was a bit flatter than I’d have liked. It probably wasn’t helped by feeling that the last puzzle was one of the weaker ones.

We escaped with the full $2m haul and both bonus items in just under 50 minutes.

I really enjoyed this game. Yes, some of the puzzles were a bit weak, but the constant pressure onwards, the feeling of emptying the vault, the collection angle of the game and the moment where it felt a bit like we were actually part of a heist were more than enough to make up for it.

This game is well suited for four people. I wouldn’t go much further than that with enthusiasts because I’m pretty sure you’d end up with sidelined players, but at four there’s still plenty for everyone to get involved with and you’ll have a chance of maxing out on your takings. For beginner teams, I’d take as many people as possible to help rush you through those puzzles!

Note that if you’ve played a game of the same theme at a venue in Peterborough, you may find that several of the puzzles in this game are very, very similar – in some cases puzzles that I’ve not seen in any other game I’ve played. I confirmed with the Escape Room Hull owners that it’s not a game they bought in or sold on, and Hull’s game predates the Peterborough venue by about eight months. I’ll leave you to read into that what you will.