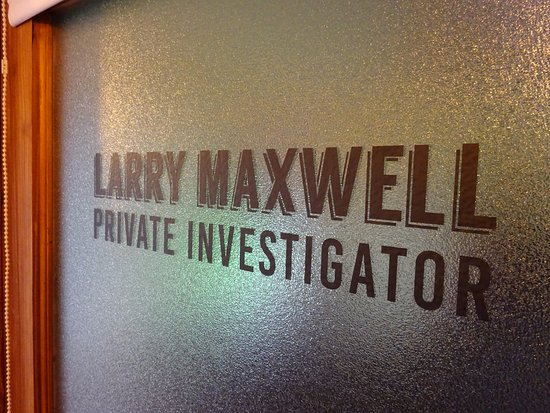 Guildford Escape Rooms is a small venue tucked down a sweet little passageway right in the heart of the commuter town. After heading inside and up a couple of floors, we found ourselves in a comfy waiting area where we were greeted by our GM. I already knew both the owners were escape room enthusiasts, but it was great to see that our GM had plenty of games under her belt too. GMing is a difficult art, so knowing what it’s like on the other side of the cameras can make a huge difference. A quick briefing later and we were heading inside to find that missing gun.

Vince Baxter, New York’s infamous crime boss, is on trial for the murder of Roxanne’s brother, Stanley Steele and with only an hour left in the case, the prosecution really need Larry’s evidence to finally convince the judge of Vince’s guilt.

The only problem is that Private Investigator Larry Maxwell is unconscious in hospital, caused by a mysterious ‘accident’ yesterday. Only Larry knows the whereabouts of the gun that ties Vince to the murder.

Can you find the missing evidence to send Vince down?

Going into the room, I had a clear picture of how things should look, and I wasn’t disappointed. In fact, even the door to enter the game is very much made to look like a Prohibition-era Private Investigator’s office. The room’s in good condition but, at its heart, this is a game in a period office so, while it certainly won’t disappoint from a visual point of view, I don’t think it will blow you away either. It’s a similar situation with the narrative where we found out a little more detail about the characters in the game, but nothing that really progressed the storyline.

That said, I found it a relaxing room to investigate, and I couldn’t help but sit down at the PI’s chair and survey the space while cogitating on the case in hand. I couldn’t spend too long thinking, though, because this is a game that requires you to (metaphorically at least) get your hands dirty and thoroughly search the space. In spite of doing what we thought was a pretty good job, we still managed to miss a well-camouflaged prop that was key to our progress. That was relatively early in the game and left us floundering for an embarrassingly long time.

Sometimes things don’t go your way, and we were further thrown off-balance when we assumed that a particular puzzle wasn’t meant to be completed yet – we felt we’d happened upon it early due to some detailed searching and would be told by the game when to continue down that thread. In fact, we’d reached the right point and were being a little too careful with our approach. I might have put that squarely on us were it not for the fact that there were some markings right next to that puzzle which led us to believe that we were missing something.

That was a turning point, though, and we soon started to get back on track and catch up on our progress. While the remainder of the room wasn’t as pretty, it was still reasonably well decorated, and we found the puzzles were much more to our liking. They certainly weren’t easy, though, with us having to exercise our grey matter to the maximum a couple of times.

All through the game, we’d been getting hints about where the finale would lead, and we weren’t disappointed. Fortunately, we’d already done most of the heavy lifting so, in spite of feeling short on time, we breezed through that final section and retrieved the missing gun with plenty of time to spare.

The Case of the Missing Gun is a pretty room which delivers some relatively difficult puzzles for players to get their teeth stuck into. There were a couple of places where we felt we’d gone a little off the rails, but good GMing meant that we were always kept on track.

We played with three, which seemed a reasonable number. I probably wouldn’t go higher than four given the size of the space.