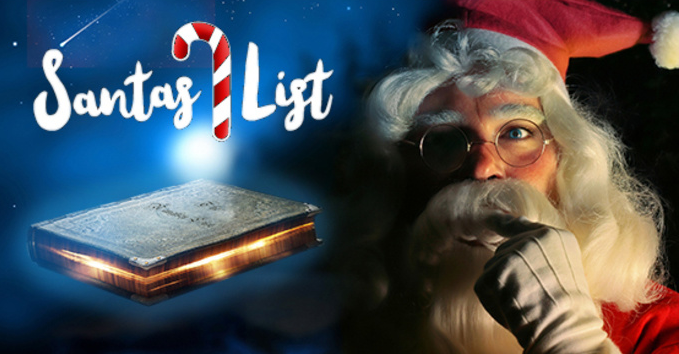 As part of a work-related trip, I found myself in Cologne with a group of colleagues for a weekend. Naturally, when asked “what shall we do?”, I suggested there might be some escape rooms in the local area and, if they *really* wanted me to, I could see whether any were available. After a little checking, some friends pointed me at Indizio, one of the few places that still had recommended games and last-minute availability.

It’s conveniently located right in the heart of the city, just a couple of streets away from one of the main squares and the city hall. The large shopfront makes it easy to find, and there’s a comfy waiting area inside, including a separate space downstairs so that teams don’t get too much in each other’s way.

Our GM for this game was particularly good – giving our briefing in flawless English and managing to inject a little bit of humour into the instructions, which are hard enough to make fun in your first language.

Your name has been added to Santa’s Naughty List and your on a mission to get it off! You have found your way into the North Pole and have 60 minutes to find the list, remove your name, and escape before the elves catch you.

Santa’s List is a charming game right from the start. It’s just what you’d expect from a Christmas-themed room: warm and cosy, with plenty of fun and Christmassy decoration to transport you to Santa’s home – although they’ve avoided the temptation to make it a festive overload. The story is similarly simple but sufficient – your names are on the naughty list, and you need to remove them and escape. In some games, simple missions can be underwhelming, but here it was just right – perhaps because it gelled with the light-hearted, feelgood nature of the experience.

I’d usually assume a Christmas escape room was temporary and would consequently be relatively basic, with simple puzzles and token decorations. Not here, however – this felt like a well built room that could be open all year round (in fact, according to a friend, it was originally a pop-up but they decided to keep it open because it was so popular).

It’s fairly linear, taking you from clue to clue with few opportunities to go off the beaten track. Add to that a set of pretty logical puzzles, and there’s a real sense of flow through the game, with you moving forward pretty much constantly from the moment you find the first puzzle till you manage to remove your names from Santa’s list and find your key to freedom. That said, there are a few challenges that may hold you up on the way – it felt like we were quite fortunate to spot the connections in a couple of cases and, on another day, we could easily have been held up by two or three of their puzzles.

For those of you who like variety, I think you’ll be pleasantly surprised. While a couple of styles of puzzles were used more than once, there was still plenty of variety overall, and they’d even included a few challenges that benefited from teamwork (albeit none that really required it). They’d made good use of their space too, getting us to move backwards and forwards through the room in a way that added to the experience without becoming annoying.

In some ways, this game has two separate finales – the point at which you complete your main mission and then the secondary goal of escaping the room. I found that a slight anticlimax. Thinking back, the feeling was perhaps exacerbated by a couple of weaker puzzles at the end of the game which left me lacking the usual adrenaline hit of escaping a room. Having said that, this isn’t a high-octane kind of game, so perhaps a calm but satisfying finish is what’s called for.

Our team of three escaped in a shade over 33 minutes.

Santa’s List is a Christmassy delight with charming decoration, solid puzzles and a nice flow through the game. It may be a Christmas-themed room, but don’t let that influence you – this is the sort of feelgood game that is fun to play at any time of the year.

We played as a group of three, but I think it would have been almost as much fun with four. More than that and I suspect the linearity would have left players feeling they were getting in each other’s way.