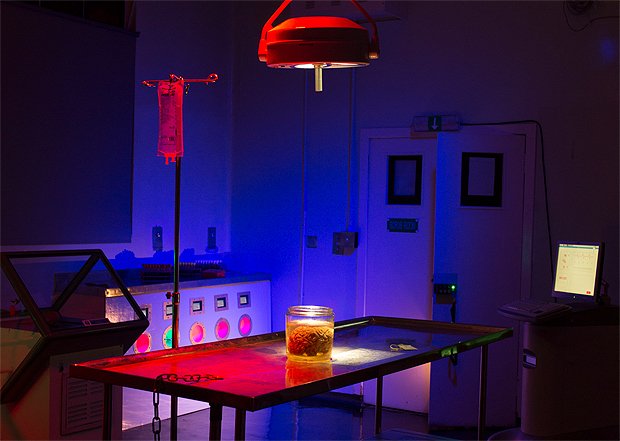 It’s been a long time since I was last in Edinburgh, but the highlight of that trip was undoubtedly the visit to Locked In Edinburgh, where we played Secret Lab, a game that turned out to be an enthusiast’s paradise. The Cutting Room opened a few months later, and it’s been on my to-do list ever since. Fast forward eighteen months and I finally managed to engineer the trip to revisit the venue (and, in the process, complete the full set of UK-based Top Escape Room Project finalists from 2019!).

As with previous games, the experience takes place in the ALLIED universe and, on this occasion, you’re sent in to save the lives of some of their agents. I love rooms with unusual stories surrounding them, but what I really appreciated about this one was how it lent itself to catering for both beginners and enthusiasts. Your task is to recover organs that have been stolen by a serial killer, the Harvester, so you can still succeed in saving some lives even if you don’t complete every puzzle in the game. It’s a constant challenge to entertain the enthusiasts while not alienating the novices, and this set-up handled it very well.

Players of their retired game Animal Hospital may find the setting somewhat familiar, but don’t let that put you off, as they’ve put a new spin on the space so it’s still capable of surprising you. Previously, Locked In Edinburgh has made use of the existing structure of the building to provide a significant part of the theming, which is great given they’re in a former veterinary hospital, but the downside is that it leaves things feeling a little sterile at times. With this game, though, they show that they can deliver theming both layered over the existing space using interesting props and totally transforming it to produce something entirely different.

What they’ve placed within the space is particularly interesting because they’ve made great use of technology to elevate the experience. Firstly, they deliver clues using an entirely unique and interesting mechanism that helps maintain immersion in the room. They then follow that up with a cool centrepiece that is used each time you find one of the missing organs. That piece of theatre is a great way of giving players a real sense of accomplishment each time they solve a set of puzzles.

Speaking of puzzles, they’ve maintained the density of earlier games and continued to produce interesting, logical challenges. They start you off fairly easily, as you might expect (although we struggled way too much!) but soon ramp up the complexity. I also like that they’ve chosen puzzles that make full use of the theme. Although not critical, that attention to detail is part of what makes their experiences such high quality.

Finally, they deliver an exciting and tense ending by adding a last piece of theatre at the end of the game. It’s a clever use of the space they had available to maximise the tension in those closing moments and ensure that every team has a great finish regardless of what stage they’ve reached.

The Cutting Room is a great experience that shows off the puzzle, story and set design skills of the team at Locked In. It’s packed full of puzzles to entertain players but still manages to squeeze in some theatre to make solving them extra special.

We played as a two and officially got out in just under sixty minutes (although I suspect that time became a little fluid in those dying seconds…). There’s plenty to do, so I’d recommend taking a team of three or four if you want to ensure you get out safely. Don’t worry – there will be plenty to keep everyone occupied.