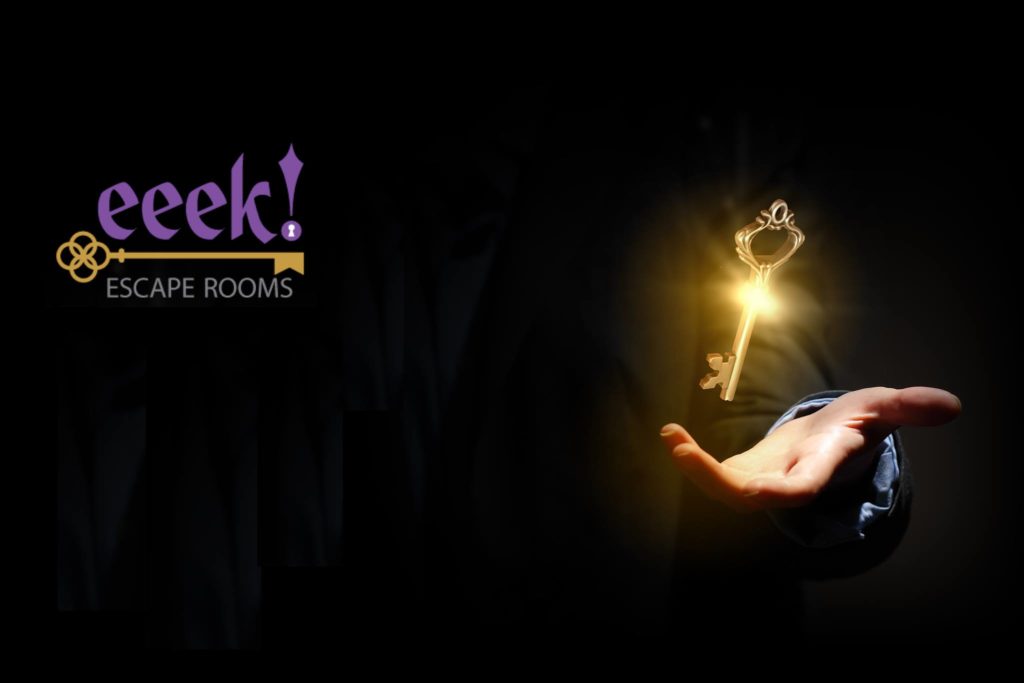 Eeek Escape Rooms is located in the smallish town of Linlithgow, halfway between Falkirk and Edinburgh. It’s a great place to stop off at if you’re transiting between the two cities and, as the birthplace of Mary Queen of Scots (amongst other things), there’s a decent amount of tourism to be had locally. That history is also the inspiration for The Blunt Axe, a game that sees you travelling back to alter history with a view to saving Mary’s life and maybe making a lasting change to the monarchy.

If you talk to someone who’s played the game, probably the first thing they’ll mention is that the GM is in the room with you. The space that the game takes place in is small enough that there’s no place to have a GM control station. It’s not quite as awkward as it sounds, in that they’re hidden behind a screen, but it did make us feel a bit self-conscious early on, especially since we could hear him whenever he moved. I know (or at least hope!) that I’m being constantly monitored when playing an escape room, but it doesn’t mean I want to be reminded of that fact!

The other thing that’s unusual is that you start off handcuffed (safely, using a great mechanism!) to a table. I’ve played many games with restraints at the start, but this was by far the most civilised; we were just sitting down facing towards the rest of the team. That avoided the usual awkwardness and discomfort – it kept us in place but didn’t feel like the cuffs were anything more than challenges to overcome. Which was good because solving those was surprisingly difficult. I can imagine new players needing a few clues early on to get going.

The puzzles were logical, and that continued throughout the game. I never felt frustrated by what was in front of me and, when we did get clues, it felt like everything we were told was a logical next step. The one minor moment of frustration was something that felt very much like a red herring. I found out after the game that it replaces an additional puzzle that’s present for larger teams. The good news, though, is that it’s absolutely clear as you follow the trail that it’s a red herring, they deliver a little bit of humour when you encounter it, and no significant time is lost from your game.

Theme-wise, there’s some old furniture and some bespoke props, but it didn’t really make me feel immersed in the world – just a representation of a castle-like surrounding. I’d have liked to see something done to help root us in a specific location and then use the props to help maximise the immersion. As part of delivering the story, they offer you information about the piece of history you’re changing at each stage in the game. That’s done in a neat way that makes it clear what’s relevant to the game and what is pure history. If you do choose to ignore the non-game part, the good news is that they provide a leaflet at the end which brings you up to speed. Given what I’ve seen of players reading in escape rooms, that seemed like a nice touch!

The game concludes with a puzzle that worked well as a pair but I think may feel a little exclusionary with larger teams. It’s relatively straightforward, so it isn’t a big deal, but that moment of triumph should be owned by the whole team, and it’s a shame that it’s physically hard for more than two or three people to get involved.

The Blunt Axe is a fun game with a variety of good challenges that should keep all players engaged. The GM being in the same room as you is certainly a little unusual but, if you can overlook that, I think you’ll have a good time learning a bit about Mary Queen of Scots while solving puzzles.

We played as a two, which was great as an enthusiast team. I think the start would probably have been more fun as a team of three or four, although that worked in our favour at the end, as the space gets a little tighter for the final challenges. Anything between two and four is probably fine but, if you’re feeling confident, I’d stick to the lower end. It’s also worth mentioning that they vary the puzzles depending on team size so, if you’re experienced enthusiasts, you may want to ask them to leave some of those extra ones in!