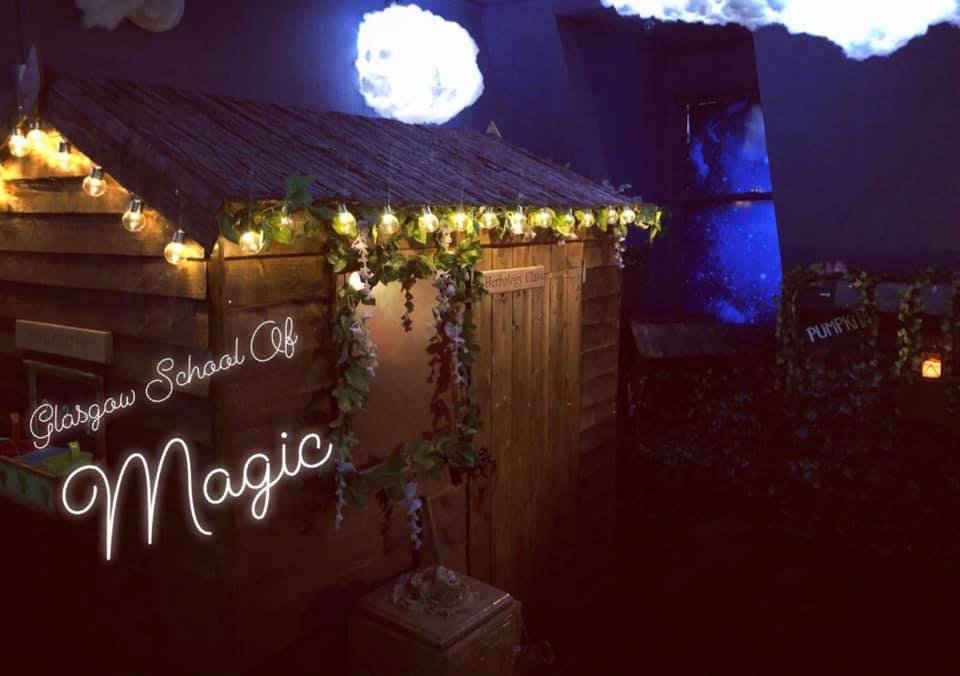 Locked In Glasgow‘s School of Magic sees you taking on your final examination at wizarding school. Naturally, magic exams aren’t easy, so it shouldn’t be a surprise to find that the game takes a little longer, at 75 minutes, and that you require a minimum of four players (although you could play it with two if you really don’t have anyone else to drag along). Before entering the game, you’re assigned to a school clan which, as I’ll talk about later, does have a small impact within the game.

Locked In Glasgow create consistently good sets, but School of Magic was by far the best when we visited. They’ve created a wizarding world that is obviously influenced by Harry Potter without feeling like it’s treading on the Warner Bros franchise’s toes. Furthermore, where other games may give you a feeling of exploration, here you get a sense that you’re progressing through the exam, taking on challenges in appropriate settings to prove your worth as a wizard. Fans of this style of theming are going to have a fantastic time just being in the space and marvelling at each new element they encounter.

The game starts off with plenty of direction to hint at what you need to do, and we found that meant we made short work of the early puzzles. Newer players will probably find those helpful in getting a feeling for what escape rooms are all about, while enthusiasts are likely to find they give an exciting start to proceedings as they race through the early stages of the room. Don’t get too carried away, though; this is a tougher game than you might imagine from those opening challenges. It’s worth saying that I don’t think the puzzles themselves are hard: I rarely came across anything that required a huge amount of thought. It’s much more about finding the connection between different parts of the game and then making the right deduction. Given these puzzles as standalone challenges, there’s little here that would hold up a team.

I’m always interested in different puzzle structures within experiences, and this room has one that I’ve not encountered in previous games: a solo section with very similar challenges that the players solve in parallel. Escape rooms are about teamwork, so a challenge room where you’re competing against your teammates goes against the grain. It also leads to potentially pyrrhic victories where as a team you might have gone through the short sequence of puzzles faster and hence left yourselves more time for the endgame. Most of the puzzles in this section felt like the right sort of challenge for this setup – gettable by everyone given long enough but with an advantage for those who get the answer quicker. Perhaps I’m bitter, having lost the competition :-), but I think the final challenge in the set is a little problematic. Some players will find it next to impossible, and that may cause frustration in this high-pressure environment, especially amongst enthusiasts, who often regard this sort of puzzle as annoying in rooms. Having said all that, I like the overall concept in spite of my initial scepticism, and this stage didn’t outstay its welcome.

The game goes back to yet another interesting structure for its finale, with players being given some direction about what to do and being allowed to split up again and solve them independently. We enjoyed that final set of challenges, which generated a sense of flow in the game to get us moving again after the end of our battle. Although this game doesn’t have the exciting ending of a couple of their other rooms, it finished as I expected, with a quiet sense of satisfaction at having passed the Wizarding exams.

Glasgow School of Magic is a gorgeous game, packed full of puzzles and with an interesting competitive twist in the middle. It delivers fun, logical challenges, and the scene-setting is the strongest I saw at Locked In Glasgow, where even the weakest rooms were well above average.

We played as a two in spite of it being a minimum-four room, and we had our work cut out to get everything done, finishing the game with five minutes remaining having taken a single clue. I think the room would be perfect for four enthusiasts – the mid-game competitive challenge works particularly well, and there’s plenty to keep you occupied right up to the end. If you can only go with two players, then it’s obviously going to be pricey to pay for the minimum of four, but I think it’s still worth the extra money given the quality of the experience and the extended duration. But be warned: it won’t be a walk in the park!