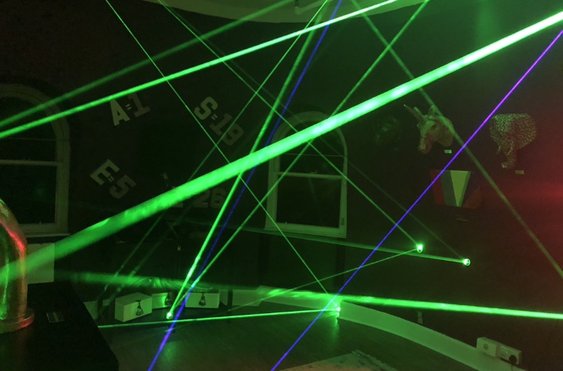 Locked In Glasgow opened the Heist only a few months after their first game, but you can see their style starting to show itself even then. The game is set in a museum, and your mission is to steal a valuable diamond after overcoming the elaborate security system. In a slight change from the usual escape room format, the time stops when you arrive back in reception rather than when you exit the room.

In addition to being an elegant space with great decoration, the Heist is laid out to really give the feeling of a museum, albeit a relatively small one. There are items on display, pictures on the wall and a general feeling that you’re somewhere that’s designed to show off beauty. It’s not the largest of spaces, but they’ve managed to pack in plenty of works of art to keep you visually entertained and, more importantly, to allow them to add plenty of puzzles.

And there are most definitely plenty of puzzles in this game. Locked In seem to always deliver plenty on that front but, even by their standards, The Heist keeps players busy. In fact, there are so many puzzles on offer at once that there is potential for confusion, making you feel uncertain about where to start. We certainly found ourselves a little unsure as to what to work on next and made the wrong decision a few times.

That’s not helped by the fact that, in a few puzzles, it’s not clear whether you’ve got all the information you need. In fact, whenever we got the right solution, it always felt very solid, and there was usually signposting to point us at what puzzle went with what lock, as well as clear hints about things like the order of digits in any given code. If you don’t feel confident about a code, then it’s almost certainly not right.

That’s relevant because this game contains several electronic safes and, by their own admission, teams usually hit at least one temporary lockout. For me, that was a source of frustration and, honestly, I’d prefer they did more on this front to put players’ minds at ease. Having said that, by the time we came to play the Heist, we were used to their style and had faith in their logic so, while we still hit one five-minute lockout, I was always confident that things would be right in the end. And they were. The problem is that, in the interim, we were worried about breaking the game rather than playing it, and that had a negative impact on immersion.

That aside, we thoroughly enjoyed the puzzle content, with some interesting and unusual challenges on offer. I particularly liked the way they integrated the theme into several of them. For example, one was simple but still very satisfying because of the input mechanism. The sheer breadth of puzzles and the fact that it’s an open game (so the correct way forward isn’t always clear) means that you’re almost certain to get stuck at some point. The result for us was that solutions often came from team discussion, one of the things that I find most enjoyable in a game. It’s worth saying that there’s one physical challenge that may prove problematic for your team. Only one person has to attempt it (although more can if you want), and it’s not too tricky, but I’m sure there are simple overrides if it is an issue for you.

The game wraps up when you lay your hand on the diamond and make the dash back to reception to stop your time. It’s a simple trick, but it adds the final piece of adrenaline that this game needs to ensure the Heist finishes on a high.

Once again, Locked In Glasgow delivered a beautiful room with plenty of fun, logical puzzles. It stands out from their other games because of the elegant museum setting and the sheer density of challenges on offer. If you’re an enthusiast, you should definitely play this game.

We played as a team of two and found more than enough to do. I’d recommend playing with three or four. After the first few puzzles, the game opens out hugely and has plenty to offer a larger team.