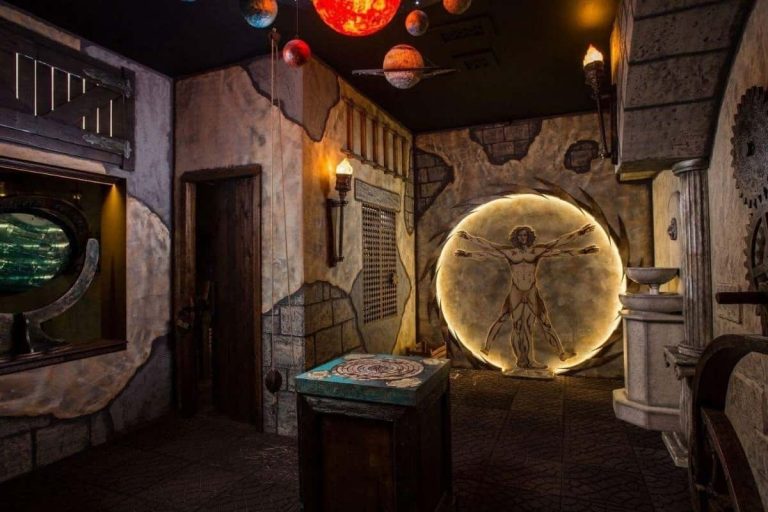 London Escaped is a relatively new venue in the capital, but it’s growing fast. At the time of playing, there were four games, and that has since increased to six. The good news, if you’re worried about that rapid growth, is that they’re not self-designed. I believe one is an Indestroom game while others have come from other design companies, including at least a couple that were popular over in LA. So, in some ways, it’s a professional outfit with lots of money spent on it, but that’s not how it feels when you arrive. There’s a strange entrance that sees you going down what looks suspiciously like a car park ramp and then into what was originally a huge waiting area but on our subsequent visit was starting to shrink as they started filling it with games. There’s a variety of entertainment on offer while you wait, so don’t be afraid to come early for ping pong, (mini) pool or console games.

Across the four experiences, there were certain themes that became apparent. Automated clues proved frustrating – rarely helping us and sometimes causing confusion. Standard of decoration was almost always high. The introduction and GMing during the game didn’t inspire confidence. It wasn’t clear to me how many GMs are typical, but there were a couple of times we asked for help and were ignored, which suggests that you at least don’t have their full attention. Player feedback was often lacking – we’d solve a puzzle but have no confirmation that we were successful. On several occasions we solved a puzzle but it wasn’t at all clear what had happened. Some of the games have been modified without the skill of someone who understands design and flow – those changes resulted in confusion on more than one occasion.

That said, there are some strong cores, and the decoration was impressive. Beginners are likely to come to most of these games and have a good time, while experienced enthusiasts may enjoy some but will likely get frustrated at others. The strongest game from my point of view was Da Vinci, closely followed by Prisoner. White Walker was enjoyable but very short, while School of Magic was terrible in several ways. They’re on Groupon (although, as per usual, I’d recommend emailing them to ensure that more money goes to the company), and I think it’s probably worth it for Da Vinci at least. Once you’ve played that game, you can make an informed decision about whether to continue through the rest.

Da Vinci is designed to impress as soon as you walk in. I didn’t really know what to expect of London Escaped, but that first sight convinced me they were a serious company. It got the game off to a great start and, to some extent, made up for a feeling that there was almost no story to the experience. This is, at its heart, a puzzle room with a Da Vinci theme and backdrop.

And, as might befit that description, straight away there were some meaty puzzles. One was a real centrepiece of the game, placed perfectly to maximise its effect, big enough to allow multiple players to surround it and a fun puzzle to boot. Another challenge, a little further into the room, was constructed to require the team to cooperate in a way that was easy to understand but trickier to carry out. There were lots of cool, physical interactions that made parts of this game a lot of fun.

Strangely, the structure was very open right from the start, with multiple puzzles on offer, before collapsing down almost immediately to a more linear affair. That worked reasonably well, because it’s a split start and the chunkiness of the later puzzles meant it was usually reasonably easy for the whole team to crowd round whatever we were solving. The split start was refreshingly unusual in the way it was set up and I think means that players who might usually be put off by that factor needn’t be worried.

The opening would have been stronger were it not for a problem with cluing. We’d almost solved the first puzzle but hadn’t aligned things quite right, so they eventually interjected with a clue. Unfortunately that clue was confusing. It wasn’t an inherently bad clue, but it turned something which might otherwise have gone unnoticed into a massive red herring. Again, that would have been fine had the clues not been automated. They were, though, so the same clue was repeated again, and again, and again. Each time, I got steadily more frustrated trying to follow the red herrings. An active GM using a customisable clue would have got me past that. Even when they gave in, it was nigh on impossible to hear the GM over the industrial air conditioning fans in the room.

Where this game struggled most, though, was in player feedback. There were several occasions where we solved a puzzle and either didn’t know it was solved or else didn’t know what it had accomplished. Having to go back and check the entire space several times was tedious and particularly frustrating on one occasion when we solved a puzzle and there was a few seconds’ delay before the action took effect – by which time we’d already checked the lock that was meant to be released…

That lack of feedback was pretty frustrating, but the single most annoying feature was a ghost puzzle – props left over from a previous puzzle that were no longer relevant to the game. It’s rare but not unheard of for this to happen, but few games in my experience have had anything that looked as much like an active puzzle as this. It was only when we asked for a clue that we were told what we were doing was pointless. While I applaud them for removing a puzzle that obviously wasn’t working in the game, leaving the clues in was utterly unacceptable.

What this game needed was a strong ending, and it did come close. The thing is that you’ll need to pay attention in the briefing and then make a final connection to realise that you’re about to finish. Otherwise your team, like ours, will likely end up wandering around the space until the GM pops their head through the door…

Da Vinci showed a lot of promise but ultimately failed to deliver. Decoration-wise, it’s very well presented and, when the puzzles work well, they’re great fun, but the combination of poor player feedback and poor GM-ing left us feeling surprisingly down about the game.

I’d usually recommend four players for a split start, but the layout in this one means the usual feeling of isolation isn’t problematic for the lone escaper in a group of three.