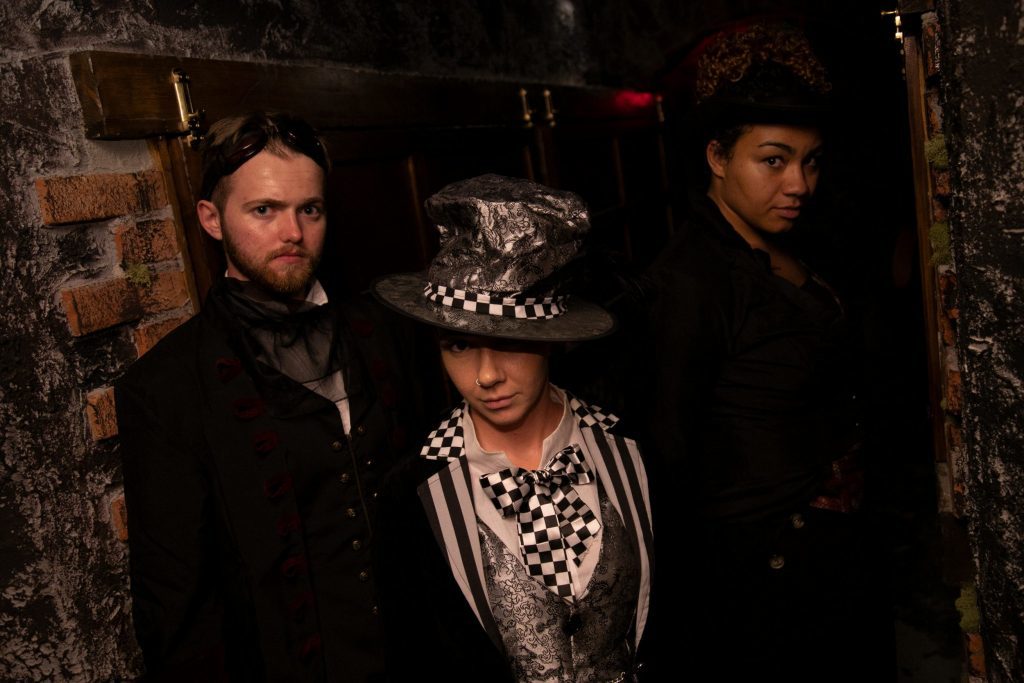 Never Give Up has a strong reputation in the North East for its Crystal Maze/Escape Room hybrids. Of all the games in the area, these were the ones that I’d heard the most praise for, so I was curious to see how they played. The first thing to mention is that they’re actor-led, with – for us at least – a fun and flamboyant host who dragged us through the attraction like a young Richard O’Brien. This was more than GMing – it was a genuine performance that added to the experience. While some aspects of the GMing weren’t perfect, he still managed to be the highlight of the experience for us.

It’s the format of Never Give Up that makes it stand apart, though, with a series of mini-games forming the first half and a 25-ish-minute escape room to finish. Unlike the Crystal Maze, you don’t get to choose those mini-games but, just like the Crystal Maze, they are a mixture of mental, skill and physical challenges. The other cool thing is that, while some of the games are played solo, others are two-player experiences (although you always have the “benefit” of your remaining team mates looking in to offer “help”…).

For the right team, those challenges would be a lot of fun. I thoroughly enjoyed pretty much all of them, but Mrs Logic, who was my only teammate, was less keen on the physical elements, and both of us found their mental challenges had a tendency towards the less fun end of the spectrum. I’ve always felt the Crystal Maze was a great format for TV but a poor format for actually playing. Never Give Up have resolved that by creating games of a similar style but allowing two players into the game and allowing even more interaction than was possible in the Maze.

In general, the experience was well maintained, with games looking good and working well – this is definitely a professional outfit. There were three exceptions to that, all of which had fairly major impacts on our enjoyment. The first took place during our very first game and involved Mrs Logic being given a tool that didn’t work. Fortunately, this was a two-player challenge, so I got on with the game, but that got her off to a really bad start. It was only afterwards that we realised the problem. That was bad luck, but it was also an omission on the GM’s part, who was too focused on our joint progress and not on whether everyone was having fun. Fun should always be at the centre of every experience.

The other two issues were during the escape room elements, where we encountered a missing key in one game and a broken torch in another. The former wasted us precious time wondering what we were meant to do, while the latter wasted us time while they frantically tried to find a torch. In an escape room that’s (a) geared towards you needing clues which you’ve earned in the mini-games beforehand and (b) only lasts twenty-five minutes, you just don’t have time to mess around while someone works out what’s going on. A lost key is simply unacceptable, and failing the room narrowly in the aftermath was particularly frustrating. In the second game, it looked like we’d have an almost identical experience but, fortunately, they added two minutes to the clock to allow for the breakdown. Failing a second room after problems with the game would have been soul-destroying.

In fact, there were other problems with those endgames. One relied on outside knowledge that left us having to brute-force our way through one challenge and take far longer than felt reasonable on another. On a couple of occasions, we asked for clues only to be met with silence. It’s not clear whether the GM didn’t want to help us or just hadn’t seen, but this again pointed to them not focusing enough on whether people are having fun. If you’ve played with me, you’ll know that clues are a last resort – when I actively ask for them, it’s because I don’t think there’s more fun to be had in the room.

Clues were another really interesting aspect to this game. Winning the games in the first half was how you ended up with clues in the finale, but getting lots of clues wasn’t actually that helpful. You couldn’t realistically use them all in the time available unless you weren’t actually trying many of the puzzles seriously. That was a real shame, because it made your performance in the first half of the experience feel somewhat pointless.

I’m left utterly unsure of how to rate these games. If you’re the sort of person that likes proper physical challenges (as in ones that might make you sweat or strain), then they’re potentially great. If you dislike that or find sudoku-style challenges a turn-off, then not so much. If the games go smoothly, they’re fun but, if you hit failures like we did (admittedly, I believe we were incredibly unlucky), it can really damage the experience.

I guess the question I ask myself is “Would I play again?” and the answer is definitely yes. These are, at their heart, two good experiences, with the Dungeon being marginally better. You’re unlikely to be as unlucky as we were so put our experiences to one side and give them a go.