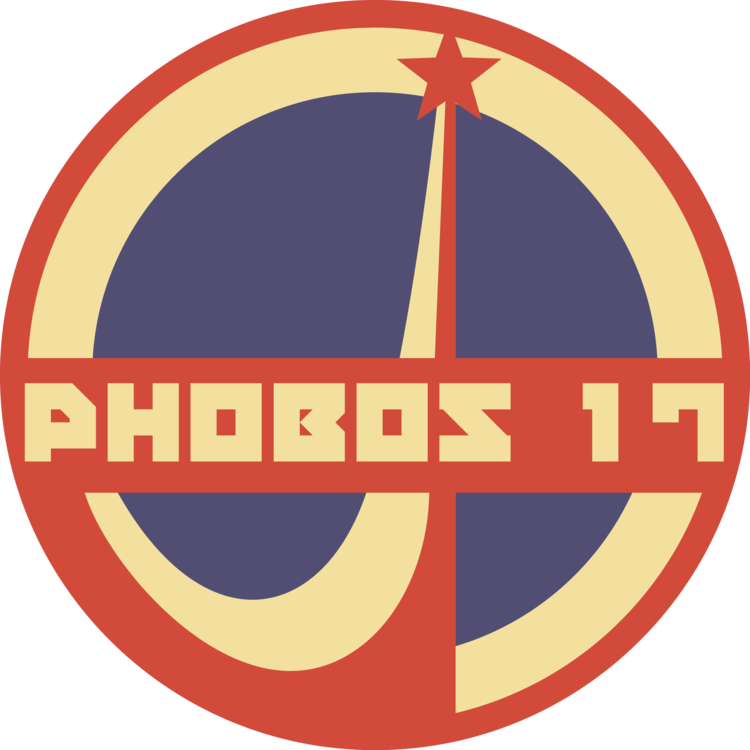 After moderate success at the Vaults, I was intrigued to see what Mostly Harmless‘ second game, Phobos 17, would look like. The location alone – set inside The Artworks in Elephant & Castle, a shipping container pop-up centre full of cool food places and random other businesses – would have had me curious. Escape rooms come in all shapes and sizes, but cramming an entire game into a 40-foot box sounded like an interesting challenge!

We were greeted by a cheery GM, dressed very much as a boat’s captain rather than a space captain. That set the stage for the game ahead. It’s clear that this is not an experience that takes itself too seriously. While we may have met our GM at the front, the game itself begins at the back of the container, with you working your way to the other side as the game progresses. It’s a pretty cramped briefing area – even for just three of us – but I guess every inch they use for briefing is an inch they lose in the game, so it feels like a fair trade-off.

True to the GM’s looks, it was a fun introduction, helped by him being an experienced actor-GM who’d clearly rehearsed his part well. By the time we entered the ancient Russian rust bucket, it felt like the game had well and truly begun.

“Turns out the rumours are all true. We’ve found something interesting in orbit around Neptune…”

Step aboard the ailing Russian rust bucket Phobos-17, we’ve got a mission for you. Somewhere in there is the score of a lifetime. And even though lifetimes ain’t what they used to be, that’s still pretty big.

Rumour is there’s some high grade Uranium tucked away in a lab. Just like mummy used to make.

I don’t know what I’d expected inside the container, but I was immediately impressed by what I saw. They’d created a fake metal interior that made us feel like we were inside a generic section of a spaceship – there wasn’t anything big and chunky that stood out as amazing, but it was more than enough to carry the theme. As the game progressed, they kept up that feeling but also added in several large props that gave some strong visuals that really helped to embed the game in our memory.

It’s a room that leans heavily on the story – or rather, one which paints a picture of life aboard this particular ship. While understanding the story isn’t critical to making progress, throughout the game you get snippets of information that humanise the characters and give you a feel for the less than harmonious life aboard Phobos 17. As hinted at by the GM’s get-up, humour is laced heavily throughout. In fact, it extended beyond the storyline into the puzzles, with one particular example making me laugh at the plight of a particular member of the crew.

The puzzles veered towards the standard escape room tropes but, critically, they’d implemented enjoyable versions of them. Enthusiasts are unlikely to see anything that’s genuinely new, but I think they’ll get satisfaction in what they do encounter, with the puzzles generally being interesting, varied and logical. I particularly appreciated the structure of the room, which felt very much geared towards three players. On more than one occasion, our team of three were able to split up and solve in parallel. In spite of the space theme, there were some padlocks around the place, but I was impressed by some physical mechanisms that they’d used to give a more hands-on feeling to the game that gelled well with the theme.

It’s not a huge space, so you’d be forgiven for thinking that searching wouldn’t play much of a part, but they’ve incorporated it throughout the experience at a level that never got frustrating. This isn’t the sort of game where you have to amass a collection of items by hunting high and low: it’s more about being observant and inquisitive.

The finale to the game was a mixed bag for me – they’d set it up to be an interesting, high-pressure ending – there was excitement, adrenaline and a nice set of puzzles, and everything was heading in the right direction. Unfortunately, a critical puzzle that some people will likely find frustrating stands in your way. For us, it was a mere road bump that was quickly solved but, if you don’t see the key information, there may not be time to clue you to the right solution before time runs out. That’s likely to leave some teams leaving frustrated while others leave full of adrenaline.

Our team of three escaped without clues in around thirty minutes.

Phobos 17 is an utterly endearing retro sci-fi game. With a good set, fun GM-ing and very solid but not spectacular puzzles, I think enthusiasts will have a great time. And, with its accessible puzzles, smaller form factor and hands-on GM, it’s perfect for first-timers.

We played as a three, which worked perfectly within the puzzle structure. It’s a 2-4-player game and, honestly, I wouldn’t worry about any of those options. This isn’t a game to rush, so take it easy and soak up the atmosphere (but not the radiation…).

The Artworks has an amazing selection of food and drink all within a few feet of the game – two craft beer pubs, a juice bar and French, Cuban, Ethiopian, Mauritian, Italian, Greek and Pakistani options. We went to Elephantastic Pizza, which does delicious sourdough pizza with interesting toppings. We also visited the two bars, Six Yard Box and Hop Art which, I’m reliably informed, had a decent range of craft beer options. The beauty of this place, though, is that each member of your party can go to any of the outlets and then get back together to eat in the communal area, so everyone can have the food they want!

Full disclosure: We weren’t charged for these tickets or the food and drink. That doesn’t influence the review – you can read more on the About page.