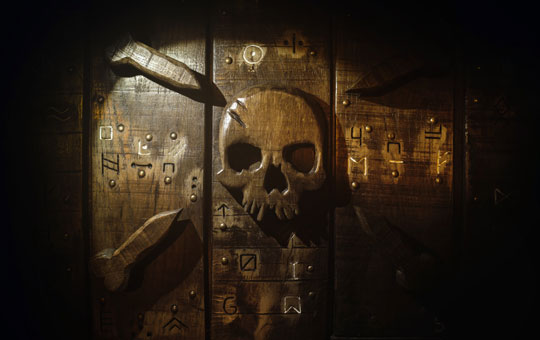 HintHunt was one of the early escape room companies – they were the first entrant to the UK market way back in 2012, and I suspect they opened in Paris at around the same time. I’d previously played James Murdock and the Zen Room in London, plus both Submarine games in Budapest, and none of them were top-ranking experiences. The Pirate’s Secret, however, had a bit of a reputation. Three people had independently recommended it to me, so I was keen to find out whether they really had made a step up from their older experiences.

HintHunt is another Paris company with multiple venues, but this time around – fortunately for us, given we first went to the wrong one – they were almost next to each other. Their secondary venue, where the pirate game is located, isn’t designed for hanging around in, with relatively little seating, so I’d aim to turn up just in time for the game and no earlier!

Walking into the room, I could immediately see why people had recommended the experience. From start to finish, it’s a gorgeous set that takes full advantage of the pirate story to create a space that feels “right”. The use of wood and rope provided a tactile environment that I enjoyed spending time in and even, shockingly, searching. It’s not just the decoration that’s impressive: it’s also the more general set design, with the game delivering impressive moments of theatre at several points.

There’s one particular moment that really impressed me, blending together decoration, theatre and puzzles to create something that will live long in my memory. It’s a simple enough idea, but it did what all good escape rooms should strive for: make the players feel clever. It would have been an almost perfect moment were it not for one of the puzzles being hampered by an incredibly stiff mechanism. We managed to get past it, and most teams will, but I can well imagine some players getting utterly stuck and needing outside assistance.

As you pass through the set, some of those theatrical moments really help to give you the sense of going on a journey through the game. That’s good, because the room isn’t heavy on narrative, so the mission moving forward helped me feel like we were always making progress.

Even better, several of the challenges felt like an intrinsic part of the adventure and made sense in the game’s world. Some were metaphors for parts of the mission, while a few felt like genuine steps you might have taken outside in the real adventure. The majority of the puzzles were high quality and made perfect sense to us. The one or two exceptions to that weren’t terrible, just lacking a little signposting or with a red herring that sent us in the wrong direction.

There’s a fun end sequence to this game which sees you retrace the steps of your journey. The final reveal is simple but enjoyable and provided a solid ending to what was a truly impressive experience.

The Pirate’s Secret certainly deserved its recommendations. It’s a beautiful game with moments of theatre, a real sense of journey and a bunch of fun puzzles thrown in. We thoroughly enjoyed the experience and, if you’re ever in Paris, it should be high up your to-do list.

Our team of three got out comfortably with a couple of clues, but I’d happily recommend it for a team of four – there’s enough by way of puzzles, and the theatre and environment of the game make me feel that the extra players won’t feel shortchanged.

That’s all on Hint Hunt Paris – want to read more about other local games? A link will be added here when the summary article is published at the end.