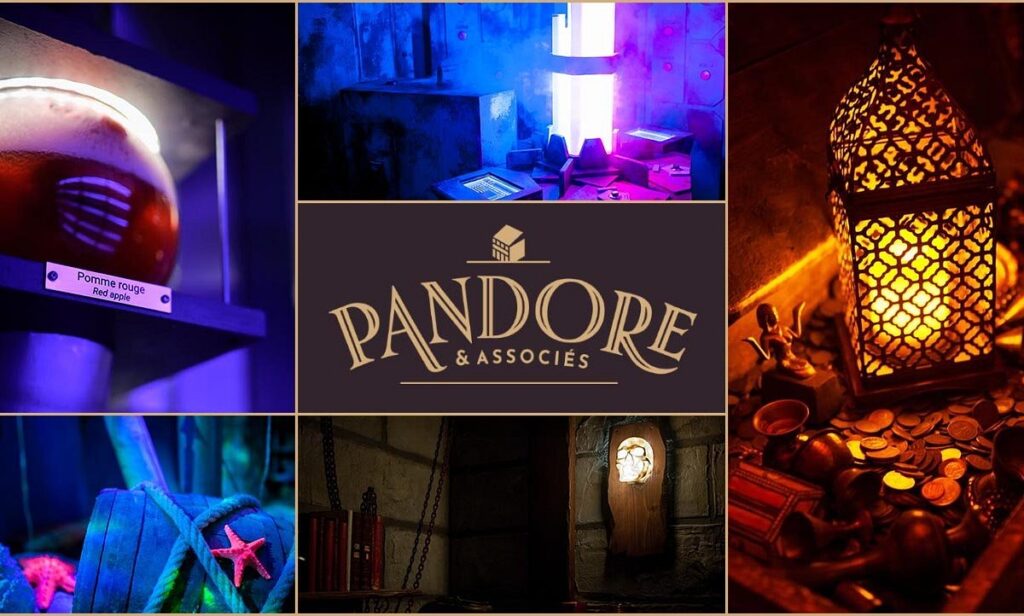 Pandore & Associés is one of the  most well-respected escape room companies in Paris, so I’d been looking forward to our visit and was keen to find out what had impressed players so much. It’s clear from the moment you step through the door that they believe in immersion. You aren’t at an escape room: you’ve come to a warehouse for fairytale objects, and you’re not about to play a game: you’re there for a job interview. The person who greets you doesn’t break character, greeting you in that context and providing you with all the briefing you need while staying within the story.

I find that I enjoy games more when they start in that style, because it really helps to sever the connection between reality and the game world. This wasn’t the most impressive one I’ve seen, but it was enough to start the immersion and get me excited for what was to come.

I have to say, though, that once we entered the room, I wasn’t that excited. My first taste of this fairytale world seemed far from magical. Indeed, it was almost like I was playing a computer game. It was fun enough, and maybe a decent icebreaker and intro to escape room puzzles, but I started to worry that I was about to get caught up in a glorified computer game.

Fortunately, those early impressions didn’t reflect on the wider game. Soon enough we had left those introductory puzzles behind us and got onto the meat of the experience. Fairytale Regulations is a sprawling game, with plenty of space for you to explore and almost all of it living up to the fairytale description. It’s not just aesthetically pleasing. They’ve made it an interesting space both in the sense of creating plenty of nooks to explore and in the sheer variety of decoration they offer. While it almost always felt “cartoony”, it varied wildly in the style of cartoon it delivered; feeling almost as if I was walking through multiple zones of a theme park, each trying to cement their own character.

Throughout the game, they make use of video to help tell the story, and I found that worked really well. You start to see what’s going on with your mission and, as the game progresses, those videos help to give more investment in what you’re trying to achieve. Given the rush players are likely to be in to get through the space, I was pleased to see that they kept the story nice and simple. I had a pretty clear idea of what was going on at each stage, and they go to some trouble to reinforce that once you’re reaching the crescendo of the game.

Puzzle wise, there’s plenty of variety, but it tends to deliver very chunky puzzles, usually ones involving several players. It’s worth saying that at least one of the puzzles would be almost impossible to complete as a two so, if you want to play, you probably do need to bring along three or confirm in advance that they can get you past it. I enjoyed the puzzles and they were logical throughout. They balanced clue-giving well, letting us get on with our work before they jumped in, just as we were getting stuck. There are more than enough challenges to go round, but they tend not to be in parallel: your whole team is likely to be working on a single puzzle at a time, though you will genuinely be working on it – this isn’t a case of watching on from the sidelines. As for searching, the game was pretty light on that front and, when it was required, it was well integrated to give an enjoyable challenge (although you will have to search carefully at times!).

Like the introduction, the finale didn’t feel like it quite fitted with the rest of the game. Where the rest of the experience had felt very immersed in the fairytale world, this was something that (deliberately) strayed away from it. That made sense in the narrative, but I think I’d have preferred a game that stuck to the fairytale world as long as possible. That aside, it was a fun, frantic and almost chaotic end to the experience that leaves behind a strong memory and ensures your adrenaline is flowing by the time you complete the game.

I can see why Fairytale Regulations is so loved by enthusiasts. From the moment you arrive, till the moment you leave, it’s non-stop immersion in a charming world. Add in a huge, sprawling set, good puzzles and beautiful decoration, and you’ve got a game that’s hard not to enjoy. We played with a team of three, which worked fine – I think enthusiasts should probably stick to three or four players to ensure no one feels like an onlooker and make the most of the finale.

Before the game, we headed out for dinner to an Italian restaurant, Dai Dai, which was just over five minutes’ walk away. I’d highly recommend a visit, although be warned that, if you don’t want to go into a sugar-induced coma, the Nutella calzone desserts are most definitely intended for sharing.