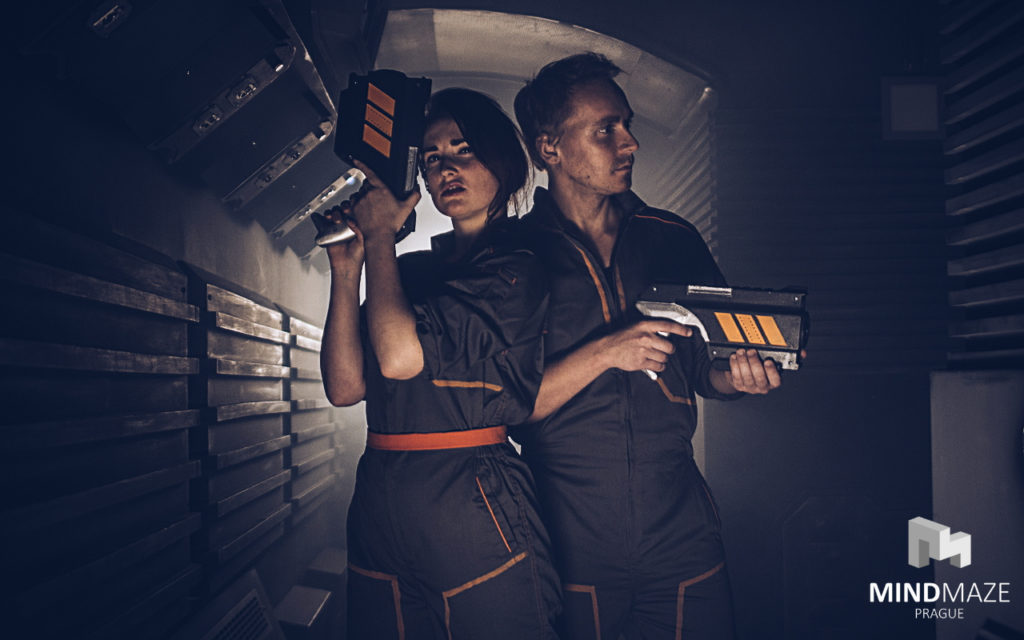 On a previous visit to Prague, I’d played MindMaze‘s original games, which had been enjoyable experiences but not on my must-play list for the city. They had been around a long time, though, and their latest offering was far newer. Even better, I’d heard good things from fellow enthusiasts.

I was pleased to see that, in spite of it just being a single game at the site (it’s separate from the other games), it didn’t feel at all cramped in reception. Since we were running late, we headed straight into the briefing area, where it became clear that they’d put a lot of effort into making this a complete experience rather than just an escape room. The briefing area is designed to look like a small shuttle, and the video briefing sees you receiving orders from your commanding officer in a style that I found reminiscent of Starship Troopers, giving things a comedy sci-fi feel.

Travel aboard the Galactic Pioneer spacecraft to colonize another planet. You volunteered for an interstellar mission but something unexpected happened along the journey – the entire mission is in danger! Join the interstellar adventure to save the mission and the future of humanity!

The game begins with you waking up from cryogenic sleep, ready to explore the spacecraft and find out what’s happened. I found that slightly jarring, because there was no obvious point where the real world ended and the story began: you walked aboard the spacecraft with no moment representing you “waking up” on board. It’s a minor point, and in most games it wouldn’t have been worthy of mention, but this wasn’t most games…

There’s not much time to dwell on that, however, because you’re immediately enchanted by the set. They’ve created a beautiful and consistent experience which definitely says “spaceship”. This isn’t a game where you’re going to be surprised by what you see after each transition (although there are still some surprises), but it did transport me to the futuristic adventure in a way that few space games have managed. A scene later in the experience was particularly powerful in projecting the theme but, even early on, there’s a fantastic effect that they use to give the impression that you’re aboard a vast spaceship. This is a game where they’ve clearly spent time making sure that you’re immersed in the environment they’ve created.

The immersion doesn’t stop there, though: it runs through everything in the game and, in particular, the puzzles. Most games see you solving a set of arbitrary challenges, but not this one. Every puzzle we came across seemed to serve a purpose in the story. Early on, you’re trying to fix up the ship, and the set of puzzles reflect that. As the game progresses, you have other missions, and each of the activities you undertake in turn reflect that purpose. There’s one point where you do something akin to a science experiment, and they’ve managed to reflect that in the style of puzzle they’ve chosen.

One puzzle in particular stood out because it fitted the theme so well, allowed all of our team to work in parallel but in a way that still required coordination, and then brought us all together to complete what was in effect a meta-puzzle. So often games which have amazing sets forget that they still need to make the puzzles fun! But not here: here, the puzzles match the backdrop.

To me, this game doesn’t feel like it tells a story, but that’s because its goal is very simple: get the mission back on track. Instead, it splits the experience into a series of scenes that get you closer to the overall goal. Through that, you live the adventure rather than being told it, and that probably works better to make the game exciting.

The game ends with an extended sequence that could get a little bit frustrating, especially if you’re playing as a pair, but it was fun for our group of three. It’s a perfect finale – allowing the whole team to get involved and experience the ending to the game while ensuring that your adrenaline will be flowing and you’ll be on a high when you complete your mission.

We escaped in fifty-five minutes, taking a single clue very early on (because I forgot I was holding a critical prop… sorry team!).

Galactic Pioneers is a fantastic space game that begins before you even enter the spaceship, packs in puzzles that are fun and on theme, offers cool decoration and finishes off the experience with a fun finale. If you’re in Prague, this should be on your list of games to play.

We played as a three, which worked well, although we didn’t have a lot of time left – experienced enthusiasts should be fine, but I don’t think four players would be excessive.