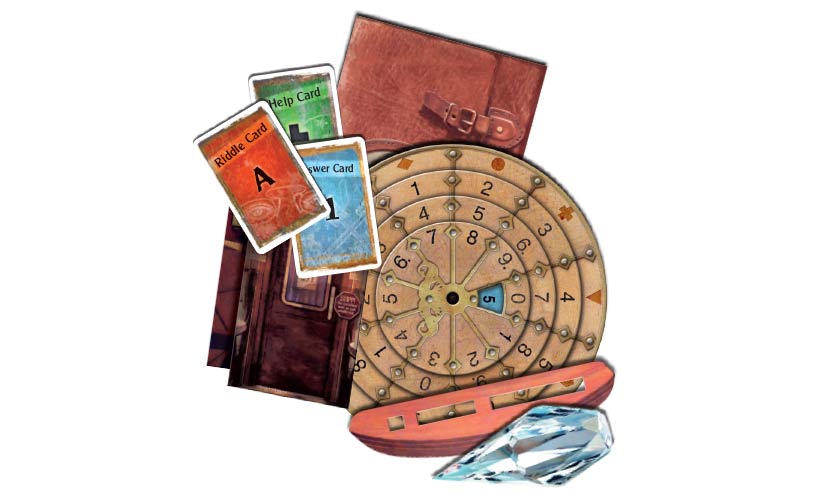 Exit the Game have been churning out escape rooms in a box since they launched their first trilogy of games eighteen months ago. Since then, they’ve released a total of ten different experiences in English with – if their German-language website is anything to go by – more to follow. There’s a simple methodology to the game: riddle cards that give you the clues, one or more booklets that give you images of the game space, a couple of props that make the game a little more physical and a code wheel that, alongside some answer cards, helps you determine if you’ve got the right solution.

In terms of the mechanics of the game, everything just seems to work. There are no apps or physical locks involved, but the code wheel is easy to use and, once you’ve got the general principle, things go pretty smoothly, with only the puzzles getting in your way.

So what are those puzzles like? Well, at times they’re pretty easy and we zoomed straight through them. In fact, on one occasion the puzzle was so easy that we struggled for a while before realising that the answer was pretty much staring us in the face. The majority, though, are pretty tough, and on a couple of occasions when we came up with answers that made us feel pretty pleased with ourselves for working our way through them. That’s a rare enough feeling in physical games so, if an escape room in a box can achieve it, it suggests they’re delivering good puzzles!

What I was really pleased to see was the elegance of some of the solutions. Good puzzles have answers that you just know are right. Not only was that true of many of the puzzles but there were a couple where the way you got the answer made you absolutely certain you’d done things right. It’s clear they’ve worked hard to come up with something genuinely innovative in their games. I’ve played four of them now, and it seems that, every time I pick up one of the boxes, I’m pleasantly surprised by something that feels like they’ve transcended the simple card-and-code-wheel answers to give players a solution that impresses.

At the start of the game, you’re given the plot of where you are. Nothing very revolutionary – you’re on a train, there’s been a murder, and you need to work out who committed it before the train arrives at its destination. Although that story isn’t amazingly important during the game, it becomes critical for the finale, when you have to point the finger of blame. For me, that’s where the game fell down. That’s partly because I like the certainty and logic that puzzles usually bring, whereas I always find that murder mysteries have flaws in their solutions (and this is no exception). That would still be fine were it not for one key problem: in order to solve murder mysteries, you have to retrieve all the necessary information. Information that you’ve collected over the last hour.

Playing an escape room is often about speed. It’s a timed game, so you’re zooming through the puzzles as quickly as you can. Indeed, the game itself encourages you to do that by giving you a star rating based on your time and clue count. Inevitably, you’re not really picking up the story as you go along, so you will need to review the game and pull out the useful information at the end. For me, that’s the equivalent of finishing an escape room on a tedious search: I need to comb back over the entire game and find all the useful tidbits, and then spend ten minutes debating who did it and why. The game partly deals with this by giving you specific pieces of evidence along the way, but there’s still some information you can miss.

All in all, though, this was still a thoroughly enjoyable game. Once again, they’ve managed to innovate within their format and provide puzzles that can surprise enthusiasts. There’s enough of a story to make the experience hang together, and the mechanics of the game just work with minimal fuss. That murder mystery ending is the one big weakness in my mind, but I know that other people will see it as a positive – I’ll leave it up to you to decide which side of the track you sit on.