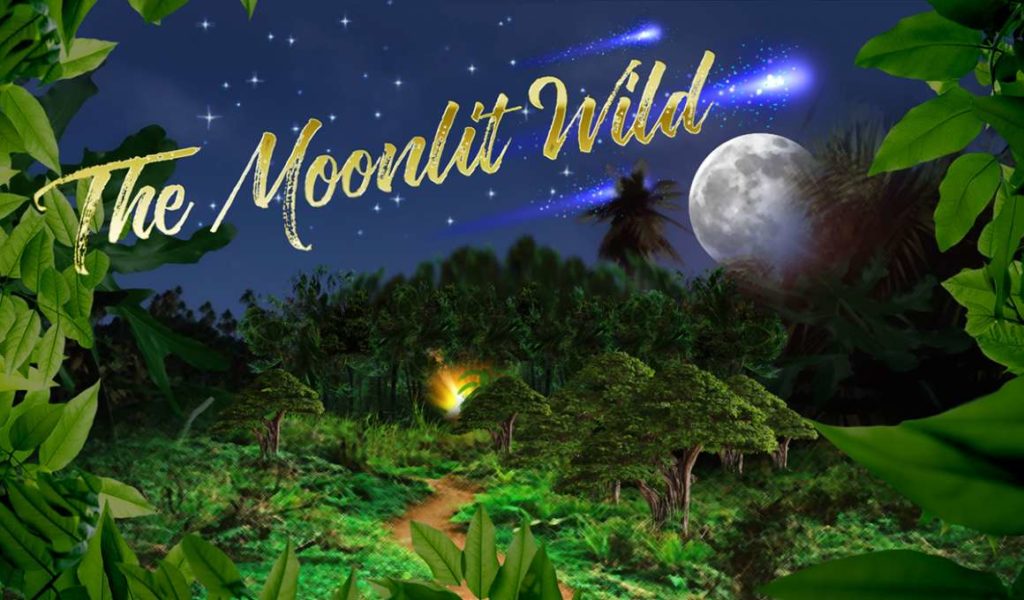 After the delightfully different design of Pressure Point’s Broken, it was back to a more conventional game with the wonderfully named The Moonlit Wild. With each game they’ve released, I’ve seen the set quality rising, and a jungle/temple-themed game felt like something that would really show what they can do. Even better, there’s a twist to this experience: hidden within the space are eleven tokens and, if you manage to collect all of them, there’s a prize to take home.

Without a doubt, The Moonlit Wild is their most ambitious project to date. Creating a jungle world with a lost temple, and not making it look cheap, is a big ask. Given their location, the budget is never going to be massive, but I was impressed with what they’d produced. They’ve created centrepieces throughout the game to give you a focus for each space, and there’s plenty of background decoration to immerse you in the world. Add in some background audio, and you’ve got a fantastic environment to help you leave the real world behind. At times, it did feel a little cartoon-like but, if you can suspend your disbelief just a little, I think you’ll find yourself carried away to the hidden world of Eltari.

The game involves a fair amount of searching. Putting aside the bonus content for a moment, there’s still plenty of things to find and see. The good news is that it’s reasonably evenly spread across the game, and the critical items are all obvious at some level. That bonus part, on the other hand, is definitely tough. You’re looking for relatively small items, and there is a wealth of places to camouflage them. We managed to find all but one, but I think trying to get the full complement risks taking the edge off the game. You may find that your lasting memory of the finale is a lot of tedious searching instead of fun puzzles. That said, they’re not mean with the hiding places. You don’t need to rip the room apart or look in particularly unreasonable places so, if searching is your thing, then it’s an enjoyable challenge.

As usual with Pressure Point rooms, there was good flow through the game, with fun puzzles that never came close to being frustrating. Where we went slowly, it was almost universally due to a search fail – only one puzzle really held us up for long once we’d spotted all the clues. The experience felt reasonably linear to me, which was fine with our team of two but might be frustrating for larger teams. Having said that, with the bonus search element you’re unlikely to find any member of the team ever has literally nothing left to do.

There’s a good sense of exploration during the game that really helped to make us feel like we were creeping through a jungle in search of a long-lost treasure. One reveal really helped with that and I suspect will be the lasting memory of the experience for most people.

Due to the search element of the room, we found the finale slightly less exciting than it should have been, because we were searching for the bonus tokens as well as trying to complete the game. You’re briefed beforehand that the experience ends as soon as you open the final lock but, of course, we didn’t know which lock was the final one, and so we got to a point where we weren’t sure if the token we were missing could have been hiding behind what turned out to be the last lock.

The Moonlit Wild was a thoroughly enjoyable romp through a jungle world with pretty decoration and fun puzzles. I found the bonus content a bit of a distraction, and it took something away from the finale but, as a mechanic to give better teams an extra challenge, I can see its merit. It’s also worth mentioning that this is a particularly child-friendly room. It’s a cool environment, and the search will give them something that puts them on an even footing with the adults.

Our team of two escaped in around forty minutes. I don’t think it’s unreasonable to complete the game and get all the bonus tokens with just two people, but I’d suggest going for three to give you a better shot. Of course, if you do that, there’s a decent chance the main part of your game will be over even faster. I guess it depends what you want from the experience.