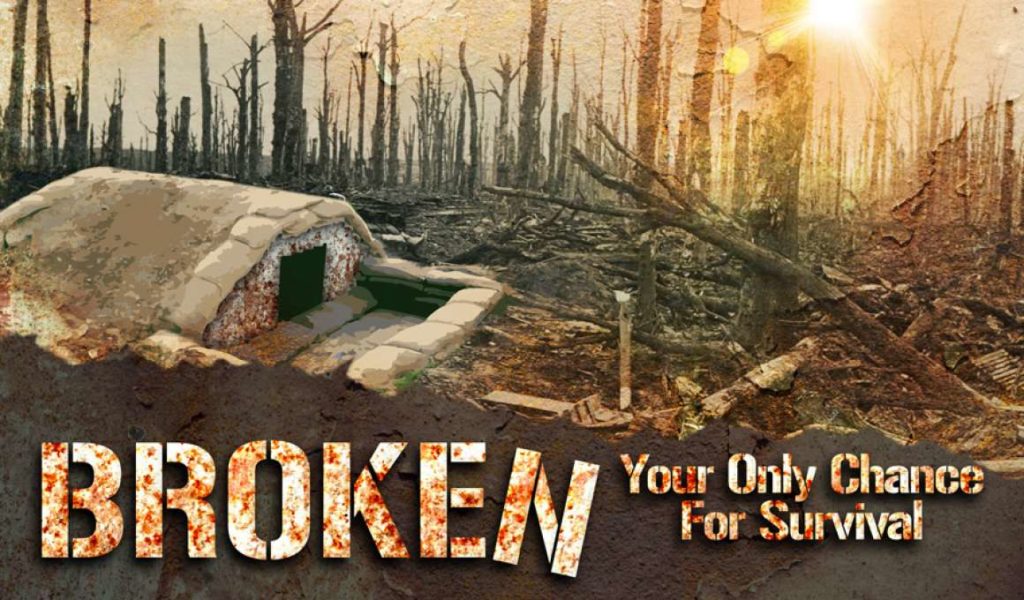 The team behind Pressure Point have made a habit of creating fun, flowing games with good sets, so they were high on our to do list when we were playing our way across Kent. I’d really enjoyed the humour in Murder on the Dancefloor, but I was pretty sure that Broken would be a very different affair with its tale of heading into an abandoned bunker before the arrival of a barrage of missiles. How would they take on this seemingly more serious story?

Broken is the smallest game at Pressure Point, but they’ve worked hard to utilise the space to the maximum. Every piece of wall and floor is used to ensure that they still give the full escape room experience. Indeed, that slight feeling of compactness lends itself well to the oppressive theme. I particularly approved of the bold way they’d chosen to make use of their limited space, which was something that I wouldn’t have thought of trying but which worked very well.

This is very much a mission-based game with relatively little in terms of narrative. There’s an overarching story of the incoming missiles but, broadly speaking, your job is to get the bunker back online and safe before the missiles arrive, and not much changes from that as you move along. That doesn’t mean they’re light on the theme, though. The decoration and the puzzles both reinforce that story, with a couple of the challenges really emphasising the nature of the bunker you’re in.

Not only did the puzzles fit with the game: they were lots of fun too. I was impressed by how well structured they were through the experience, starting off with relatively clear instructions about what we were meant to do to allow new teams to find their feet, then leaving us to work things out more for ourselves. There were some tougher challenges in there, but every one of them was thoroughly logical. For those of you who enjoy teamwork, rest assured you’ll get plenty of that – there are definitely puzzles here which will require at least two people and could meaningfully involve more if you wanted.

The game finishes with a flourish that I really didn’t see coming. The final puzzle was one that I started solving before I truly understood it but, when I realised what they were doing, I couldn’t help but smile. It’s a clever way to end the experience that reinforces what the game is about and leaves you with a nice aha moment as you hopefully seal your victory. Well played!

Our team of two escaped in about 35 minutes without clues.

Pressure Point delivered again, creating a fun game with a great balance of puzzles. I loved the unusual theme, the clever structure, the strong set and the confident finale. They seem to have the knack of creating games that feel really polished and leave you with that hard-to-define feeling of “flow”.

We played as a two and, for enthusiast teams, I’d strongly encourage that size. You certainly could play with a larger team – there’s enough space, and I don’t think you’d be frustrated by not having access to puzzles, but I think the game would be over a little too quickly. For less experienced teams, or teams with younger players, I’d probably suggest four as a good number.