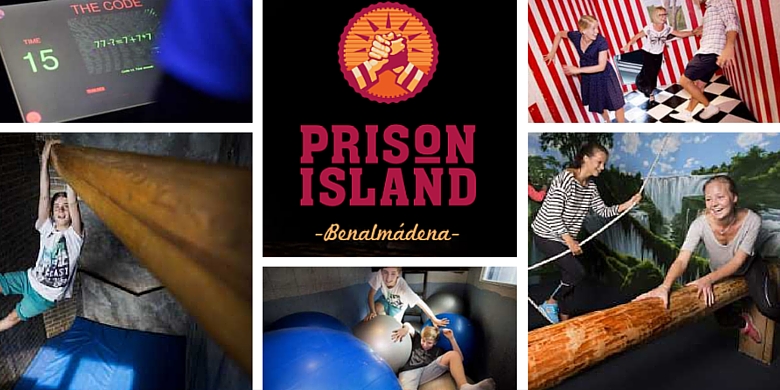 Prison Island is most definitely not an escape room. If you’ve heard of Boda Borg or Crystal Maze, that’s probably the best comparison. The setup is reasonably simple – they have a series of game rooms that you enter for up to about three minutes and then play until you either win, run out of time or lose. You get a score for each game and, at the end of your hour (or longer – you can buy in thirty-minute intervals thereafter), they add up your maximum score per room and that’s your result.

With each room having a green or red light to let you know if it’s occupied and the games arranged on either side of a corridor that runs a ring through the space, it’s pretty action-packed – we played 63 games in two hours, and that included taking a couple of breaks because we were pretty tired. Some of those games ended after just ten seconds. Most lasted a minute or two. Some took the full three.

Part of the excitement to this experience is the wonder of entering new rooms and trying to work out what you’re meant to do so, while I want to give you an idea of what you’ll encounter, it’s important I don’t spoil the individual scenarios. I’ll try my best!

So, what are the games like? Well, there are a total of 22 at this venue (more at others, I believe), of which two were closed for maintenance on the day we visited. Of the ones we played, two were almost purely logic-based, one was heavily maths-based and the rest involved a combination of skill, physical activity, searching and trying to spot patterns that you should follow in some way. They recommend you start with some of the easier skill challenges, but I think that’s mainly to give you a solid base score and avoid embarrassment – most teams should be able to pick up something like 200 points in the first three rooms and, with the average adult score being ~300, that start is good for confidence.

In general, the games require three people for maximum points, and the ones that don’t are almost universally made more complicated by having just two. Conversely, many of the challenges have only three things that need to be done so, if you have four or five, one or two of your team members will be unable to be heavily involved. If at all possible, I’d go in a team of three.

We played as a group of three with two young children (7 and 9). The seven-year-old struggled, as most of it was just beyond her limit. The nine-year-old was in her element but needed quite a bit of explanation for some of the games. I think they’d become self-sufficient at around 12.

In spite of what two games being closed for maintenance might suggest, the set seemed very well maintained – I didn’t see anything that looked faulty or worn (it’s been open for two years!), and there were no faulty buttons anywhere in the game, which was impressive given that they get smashed pretty much constantly all day, every day.

We went along during their first slot of the day and were disappointed to find that a large group had also booked at the same time. Fortunately, this wasn’t an issue at all – with twenty cells, there was pretty much always one available and, on the odd occasion that we wanted a specific game, we never had to queue for more than ninety seconds. Frankly, there were times when I’d have been grateful for that break, as a couple of the games required serious physical activity.

Unlike Boda Borg, this never reaches ninja warrior level. If you can crawl, climb across a few climbing holds and balance on one foot, then you’re more than able to take on the challenges. If you don’t want to put in much effort, you can skip the hardest parts (you can always just give up on a challenge) or let your teammates take the lead. You’re likely to get hot – some of the rooms are quite small which, combined with physical exercise, will cause temperatures to rise fast. Nothing terrible, though: it was generally sufficiently well air-conditioned that I didn’t have a problem, but I’d recommend taking a sports t-shirt and shorts!

That’s all very “this is what it is” because I think it’s important to go in with the right expectations, but the truth of the matter is that we spent a thoroughly enjoyable two-hour stint playing the games. We came away with lots of fun memories, talking about the different games and more than a little tired. If you get the chance to play and you like slightly physical activities, then I’d heartily recommend a trip!