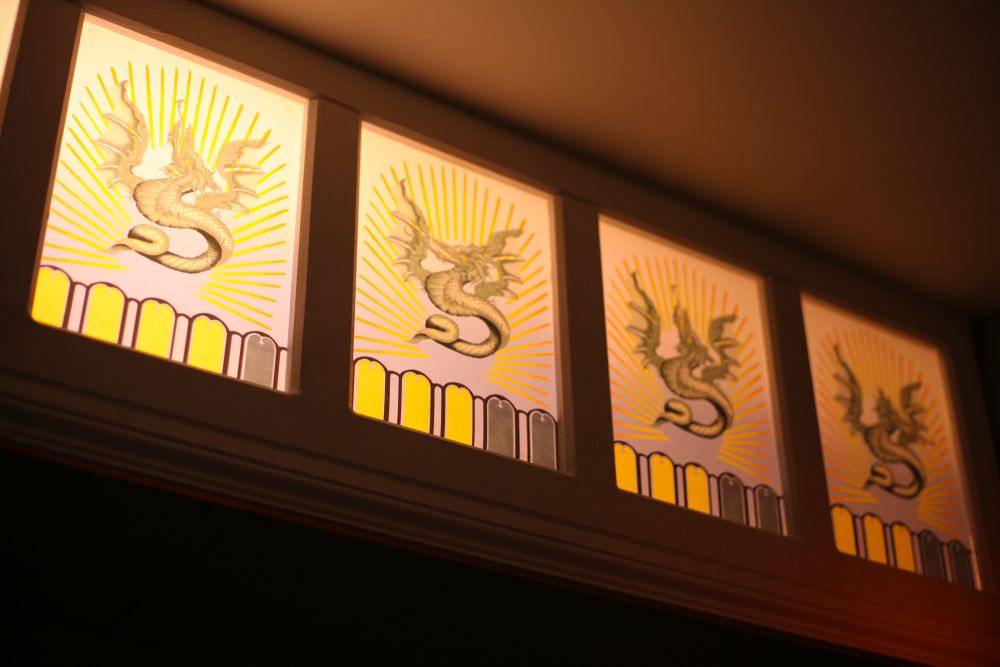 There had been a cool in-character introduction from our GM in Pier Pressure‘s other game, Modrophenia, so I was curious to see who would be greeting us this time round. We weren’t disappointed – out came somebody in period dress who was more than capable of engaging in some light banter with the players. Every team varies, and some won’t appreciate the interaction, but for me it really helps get an escape room off to a great start.

Speaking of great starts, they’ve got just the right entrance to this game, with a pair of double doors, front and central in the venue, that give just a hint of what it may be like inside the room itself. They kept us waiting to find out, though, because there’s a great story to tell here that’s loosely based on history and gives you a proper mission along with a reason why you’ve got limited time. As the briefing wound down, our GM threw open the doors and let us see the pavilion…

The Pavilion is due to be demolished at the behest of Queen Victoria. Fortunately, there’s a petition with thousands of names that should prevent it being brought down. Only one problem – the document has been stolen and hidden in the Pavilion itself. Head inside, solve the puzzles and bring out the only thing that can save Brighton’s heritage.

It’s an impressive effect. As the doors swing open, you’re overwhelmed by opulence. If you have the time afterwards, I recommend asking if you can see one of the books they have on the Pavilion itself to get a feel for just how well they’ve mimicked the decoration. They’ve emulated several different aspects, which come together to give a real feeling of luxury to the experience, to the point that I felt almost lucky to be allowed inside. The use of the double doors in particular totally changes the way you enter the game and, hence, that critical first impression, and those bold images continue with several large props that draw your attention throughout the experience.

The story they give you outside very much creates a clear mission but, once inside the room, you could pretty much forget it. That said, they have made good use of the props and theme to create puzzles that are very much specific to the room, which I thoroughly approve of. I particularly appreciated that they’d integrated the challenges into several of the chunkier props so that they weren’t just ornamentation but an intrinsic part of the game. As you might expect in a room with big props, several of the puzzles are also very tactile, requiring you to physically interact with them rather than just, say, enter a code on a padlock.

I loved the structure they’d put into the game, with a very open experience throughout but some clear puzzle tracks towards the end that bring you to the final goal. There’s something satisfying about knowing you’ve got a set of tasks to tick off, the team splitting to complete them and then coming back to tackle whichever ones turn out to be the most difficult or require teamwork. One of them, though, went a little too far down that path: it pretty much required the whole team to be involved, which would have been fine except there was a lot of trial and error as well. That was exacerbated by a mechanism that’s become a little inaccurate over time to add some frustration. We did get the right answer in the end, but we entered it with hope rather than certainty.

It was pretty clear from early on where the finale of this game lay, and the game structure really helped to ratchet up the intensity as we neared the end. That’s nicely capped off with a satisfying reveal that clearly signals the end of the game.

We escaped in 37 minutes taking, I think, a single clue. A lovely touch at Pavilion Perplex is that they also give out team cards to players with three stamps that highlight where you excelled. That’s an excellent way of making them feel special and ensuring the GMs watch the whole game!

From the grand entrance to the finish, this was a visually impressive game with chunky pieces of decoration that fitted the theme and played a significant part in the experience. I’d have liked to see some of the weaker puzzles improved but, overall, there were still plenty of enjoyable challenges on offer. All that, combined with a fun story tying the experience together, means I have no hesitation in recommending the game to enthusiasts and beginners alike.

We played as a three, and I’d have happily added one to that mix – this is a game with a fair amount of parallelisation. Go much beyond that and you may start to find it getting slightly crowded, though.