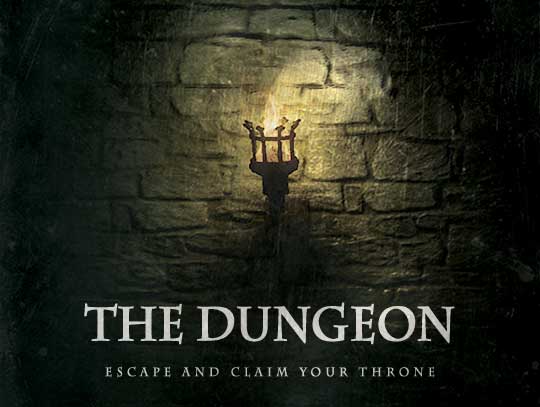 When we parked up next to a nondescript building in the centre of Huddersfield, I didn’t hold out much hope for Stuck in the Riddle. Of course, everyone knows you shouldn’t judge a book by its cover, and the truth in that became apparent immediately after going inside. We were greeted with huge wall hangings that echoed the dungeon theme and decals adorning the windows. It’s an impressive and imposing start to the experience and a good reminder that you can influence how people feel about a room before you even start the briefing.

Upstairs, there’s a cosy waiting area where the couple who run the place gave us a friendly introduction before the game and spent some time afterwards chatting to us about our experiences in the local area and their plans for future rooms. It very much had that independent, family-run vibe which I generally find is a good sign in escape rooms.

The King is dead! In the late hours of last night your father, and the King of England, tragically died under suspicious circumstances. Suddenly a troupe of guards, commanded by your cousin, burst into your room while you sleep and take you to the dungeon to lock you up – as the rightful heir to the throne you suspect your cousin is planning on murdering you so he can claim the throne for himself.

As a big fan of medieval games, I was keen to see how they’d managed to transform the office space into something that could convey a sense of history. They’d filled the room with a variety of good props varying from minor details to fairly central parts of the room. On top of that, they’d put an impressive amount of effort into decorating the space. You’re not going to see much in terms of real wood or stone adorning the walls, but they’ve made use of one of the owners’ printing expertise to make sure they’ve conveyed not only the medieval theme but several different scenes within that. At one point they’ve even gone as far as to change the surface underfoot to help with that.

While the story doesn’t develop during the game, you’re definitely taken on a journey. It’s an experience with a real sense of exploration, and not only will you be looking ahead with anticipation but you’ll be crisscrossing the room continuously, so expect your fitbit to register a bit more activity than your average experience. It absolutely did not feel like a linear game – neither in terms of the puzzles you have to solve nor in how you move through the space.

As you might imagine with a game that has a sense of exploration and encourages you to move backwards and forwards, there were several puzzles that exercised the team’s communication skills in a fun way. At least one of those resulted in a significant bottleneck halfway through the experience. Usually I’d use that term in a negative way, but here it was definitely a positive: It got the whole team back together, which balanced up the puzzles’ more open feeling during other parts of the game.

The puzzles themselves were enjoyable with a decent amount of variety and were, without exception, logical. My favourite was probably a multi-stage challenge that involved us working as a team spread across the space and working through a few steps to get the answer we needed. Because games have to be accessible to first-timers and fit in with time constraints, it’s rare to see complex puzzles in a room, but I like the way this took a couple of simpler puzzles and chained them together to create something that both challenged us a bit more than your average obstacle and involved the whole team.

The one place I felt they could do with improving was the finale: The final puzzle was perfectly logical but felt flat compared to the rest of the game. I’d have liked to see something a little higher-octane that would see us running out the door with excitement or with a particularly fun solve.

We escaped (with a pretty experienced team!) in around half an hour having taken a single clue.

The Dungeon is a fun game with a good sense of exploration, pretty decoration and a great use of space. All this was backed up by an enjoyable set of puzzles involving plenty of teamwork.

We played as a four, which worked well for most of the game. It’s the sort of room that lends itself well to groups of varying sizes, with some puzzles that bring the whole team together and others where you can work in parallel, so I certainly wouldn’t worry about taking along a team of three to five enthusiasts.