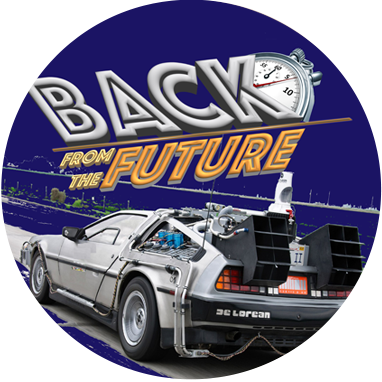 The Escapologist is a fascinating venue which combines a beautiful steampunk-themed bar and restaurant downstairs with three escape rooms on the first floor. Two of those escape rooms are from the Escape stable – World of Wizardry and Anarchy of the Seas – but we were playing their latest, a fully self-designed game.

There’s cheap and easy parking just across the street, so we were quickly inside and sitting in the comfy waiting area ready for the briefing from a friendly GM. Scarily, just before we went in, we found that only three teams had previously escaped this game and two of them had done so in the dying seconds. That’s never a good sign from an enthusiast point of view: would this be a game where our escape was dependent on a final roll of the dice before the sixty minutes was up? Time would tell…

Are you ready to put your time travel skills to the test, drive a Delorean and pilot a hoverboard? Step into a world of days gone by and a technological future and escape from both to power up the Delorean and make it onto the wall of fame.

You’ll need all your cunning and shrewd observation as you solve old-school puzzles and tricky, technological mind-benders to escape Back From the Future. In just 60 minutes you’ll travel to the good old days of milkshakes and rock ‘n’ roll then jet off to a future where hoverboards and technology rule supreme.

Will you and your teammates rise to the challenge, power up the Delorean and make it home? The experience is fully immersive, so you will find yourself in realistic scenes relating to the popular film trilogy, Back to The Future, giving you a truly incredible game experience.

My first reaction on crossing the threshold was that they’d really gone for a Back to the Future theme. I’m no IP expert, but I was surprised by the number of references to the films and worry that at some point it will come back to bite them. Putting that to one side, the game was engaging as soon as we walked in, causing us to immediately jump on a couple of potentially interesting puzzles. We didn’t get off to the most auspicious of starts, however, missing some really obvious stuff, but it wouldn’t make much difference to our result: as soon as we’d got the easy first steps done, things started to go spectacularly off the rails.

Puzzle after puzzle seemed to have flaws that significantly impacted our enjoyment. Lack of player feedback on one puzzle meant that, even when we’d done the right thing, we persisted in the mistaken belief that we’d done the puzzle incorrectly. Another one blatantly gave the wrong answer. A third could not realistically be solved without a clue: there was an arbitrary way of calculating the answer for which we came up with several better choices. Another had significant levels of ambiguity embedded within it. Yet another provided a useless prop that we could easily have spent time dealing with because it seemed likely to be relevant but was in fact a red herring.

Almost every puzzle frustrated me in some way and left us needing a clue but, at the same time, you could see the logic in them and imagine how, with just a few small changes, they could have been significantly improved.

As you’d expect with a game heavily built on an existing film, the sense of story was embedded throughout (although, at times, it very much relied on you having seen the film to understand how the story was developing). The decoration really backed that up in places, although there was one particular point where it felt pretty bare – I guess that was a deliberate choice rather than an attempt to cut corners, but it felt like a missed opportunity to me.

The finale was pretty much as you might expect, but the lack of direction at the end left us wondering whether there was something more to be done – I wasn’t certain that we’d finished until our GM came in.

We escaped with about 50 minutes on the clock having taken a string of clues.

I really don’t know what to say about this game. Mostly it looked good, and there were some fun moments that gave a sense of theatre to the experience. It’s clear they’ve put their heart and soul into creating this experience and it was close to being an enjoyable game, but puzzle after puzzle was flawed, with the result that solving them left me feeling relieved rather than excited.

I think this game is very much the sort that could be significantly improved with a bit of work. Until then, if you’re visiting the Escapologist, I’d recommend heading to their other two rooms. I’ve not played them here, but I’ve played variants of them in London and they’re both fun experiences.