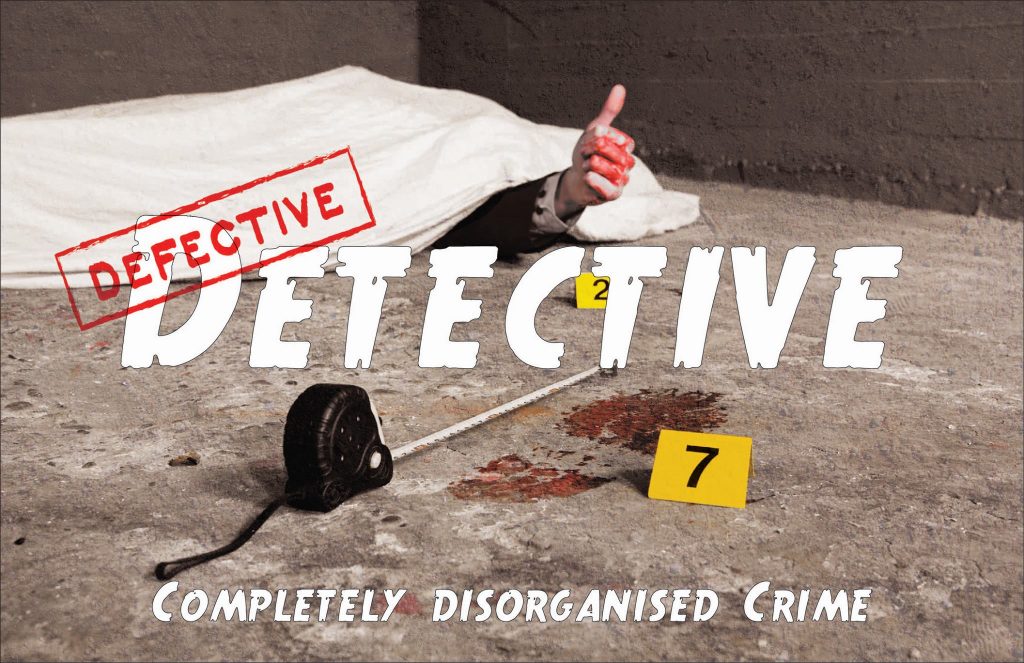 Turn your back on the Panic Room for just a second and you’ll probably find they’ve opened another escape room. I’ve not done the statistics but I’d be surprised if they weren’t number one in terms of the rate of opening new games over the past year. In the process, they’ve seem to have taken over most of the centre of Gravesend but I was surprised to find that Defective Detective while using the same reception as a couple of their other games is in yet another building.

From the outside, and even as you walk up the stairs, it looks like an abandoned old building. While that didn’t quite fit the story it added an edge to the briefing and that feeling of abandonment is never a bad thing to have when you’re entering an escape room. It also explained why the reception was down in a separate area – in effect, they’ve rented a single flat or office in the building so the game is, more or less, the entire space with the briefing taking place in the stairwell.

The game’s set up as a murder mystery but I’d heard plenty of suggestion that there was a comedy element including humour that might put some players off so I was keen to find out how this new take on a classic genre would play out.

Can you solve the case of the Defective Detective? There has been a murder! However the detective has come to the completely wrong conclusion. You must gather your own team of detective friends and family and try to solve who the real killer was before he hands in his case at Police HQ.

The first impression on walking into the space is of a beautiful old apartment, slightly run down but still impressive. With high ceilings and almost all the features you’d expect in a proper flat it was both impressive and intimidating – knowing where to start in such a big open space was a tough challenge. Talking to the owners afterwards, it was all the more impressive for finding out that when they’d taken it on, it had been pretty much a blank canvas that had previously held offices.

There’s a real sense of story in this game using one of the few mechanics that seems to work for me in a game – reasonably frequent thirty second bites of information that slowly builds the bigger picture. At times it was a little confusing but as the game progresses it crystallises well so that by the time you leave you’ve got a pretty clear picture of what happened.

As I said above, there’s a fair amount to investigate in the apartment and at times it felt like there just wasn’t a huge return on that investment. While I don’t like a game that fills itself with red herrings and I’d prefer the puzzles to be on theme, there was a feeling of repeated disappointment when you opened yet another cupboard that was entirely bare.

Those little story nuggets were pretty clear but on top of that there’s a lot of information to wade through during the game. You’re left with a choice – do you read through all that info as you get it or ignore it. The former might mean you miss something critical to moving on while the latter might leave you frustrated at the lack of action. That was representative of a more general issue we encountered in the game – it often wasn’t clear where we were meant to head next and as a reasonably linear game that could mean you making little progress until you hit upon the right next step.

The humour aspect this game was far more understated than I’d expected. Yes, there were funny references in there but they were never in your face and I don’t think anyone will find they get in the way of the story. In fact, I’d have preferred it to be slightly quirkier if anything.

The story comes together nicely for the finale with the plot being wrapped up. The one sticking point was that you’re left a little uncertain as to what you’re meant to do. You’re told during the briefing that you’re meant to radio in your findings when you finish but that could be up to an hour earlier and easily forgotten. In an ideal world, I think there would be a strong mechanic to finish the game – for example getting access to a critical physical piece of evidence that made it obvious the game was over.

We escaped in 57 minutes having taken around five clues. Those clues were for things that on another day we might have got so don’t read quite as much into that as the slow time and high clue count might suggest.

Some games just don’t gel with you and this was one of those games. I applaud the Panic Room for trying out a lot of different stuff (the Gilman Hotel, Dino Land and Old Father Time are three incredibly different experiences!) but the risk with that is that sometimes you’ll create something that doesn’t work well and, more likely, doesn’t appeal to everyone.

Of all the games we’ve played in Gravesend, this was probably our least favourite. The funny side of the room didn’t engage me as much so we were left with a fairly normal escape room albeit one in a pretty set.

There’s a fair amount of content here so I wouldn’t worry about heading along with four enthusiasts. With two it felt a little stretched but I still think a good enthusiast team will have less trouble than we did.