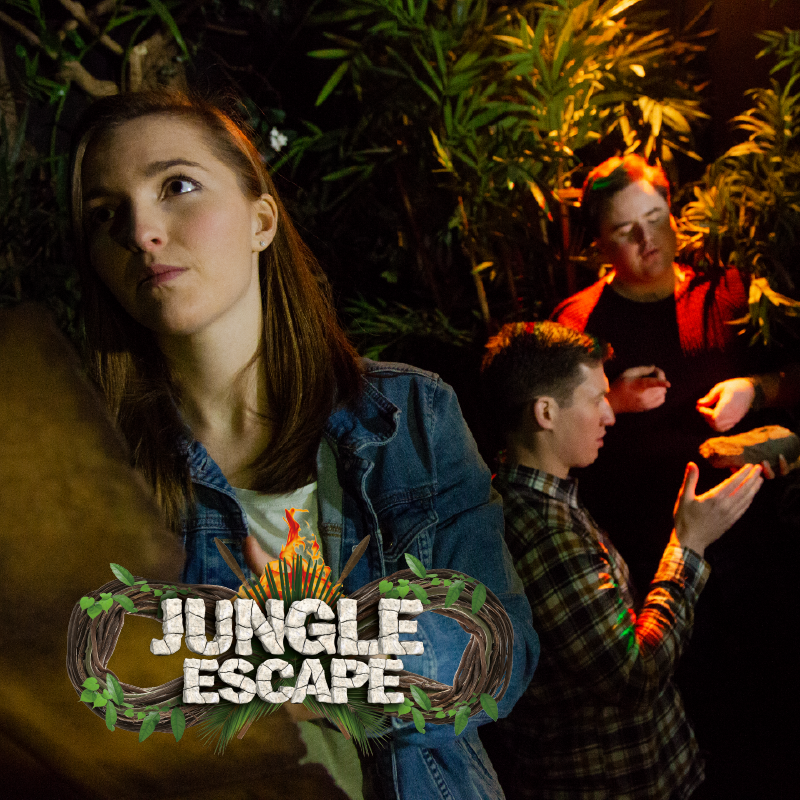 Escape rooms at Merlin attractions seem to be popping up increasingly often. There was a temporary one at Warwick Castle last year, a permanent one at Blackpool Dungeons has been running for a while, and now they’ve added two (identical) rooms at Thorpe Park. I was particularly interested in Jungle Escape because it made no pretence of linking to history or having educational value but was a premium attraction – you pay extra to play when you could be heading to the rollercoasters instead.

Tickets can be bought online or in the park for a specific time, with the actual game entry time frustratingly being around twenty minutes after the stated time on the ticket – you get a little bit of actor interaction in the meantime but not enough to warrant hanging around. I believe up to twelve people can be booked into each slot and, with two games, that means a maximum team size of six players. Interestingly, with only six booked into our slot, they still split us into a four and a two, so there’s a small chance enthusiasts can wangle their way to playing as a couple (which – spoilers! – is probably the optimal experience).

Once inside, there’s a five-minute actor and video briefing inside a nicely themed area where you’re told that you’re playing for crystals in each zone, head-to-head with the other team. It wasn’t entirely clear how many you’d be playing for, but it turned out just two, which means the competitive nature of it is significantly less than you might imagine.

There’s a fixed duration in each space, so you don’t have much time to appreciate the decoration. That’s a shame because, unsurprisingly given it’s a theme park, they’ve done a great job. You really are broken away from the rest of the park and into this jungle/cave environment. It’s decoration that’s designed to fade away into the background, though, with each space having a fairly clear set of puzzle elements with good signposting on where you’re meant to start.

Those puzzles were enjoyable, allowing multiple team members to be engaged but not requiring more than the two players that is the realistic minimum. It’s fairly evenly split between mental and physical challenges (yes, there’s a bit of a Crystal Maze vibe to the whole thing), and it gets reasonably challenging at times.

There are two big problems with this game. Firstly, there’s not enough content for six people to truly play. With such a short game (a total of about fourteen minutes of play), there’s a decent chance that a quieter member of a team of six will get to do almost nothing. Secondly, there’s a fixed time in each zone and you then have to wait until the other team has finished before moving on. We were very fast through one of the zones and then just stood around for five minutes with nothing to do. That also highlighted how poor the audio in the experience is, with us struggling to hear the jokes even when we had nothing else to do. Unfortunately, in the other zone we got close to the end and then didn’t know how to proceed. Given what I learned afterwards, I’m almost certain that the tech had failed and the puzzle couldn’t have been completed.

The experience ended with something that felt very much like a Crystal Maze transition – taking a guided journey through the space to get back to the outside world. Definitely fun for the kids in the group, although a bit of a pain if you’re carrying coats and/or bags!

If it had been fully working, this would have been an OK experience although still not stunning. If you don’t mind giving up ~40 minutes of your day in the park (maybe after lunch!), potentially being paired up with strangers and having too many people in the space, then it’s a fun experience. Playing with randoms is always a risk, though, so it may be worth occasionally checking the availability of the next slot and, when you see one with lots of tickets left, jumping on board at the last minute and hoping that you can blag your way to playing as a pair.