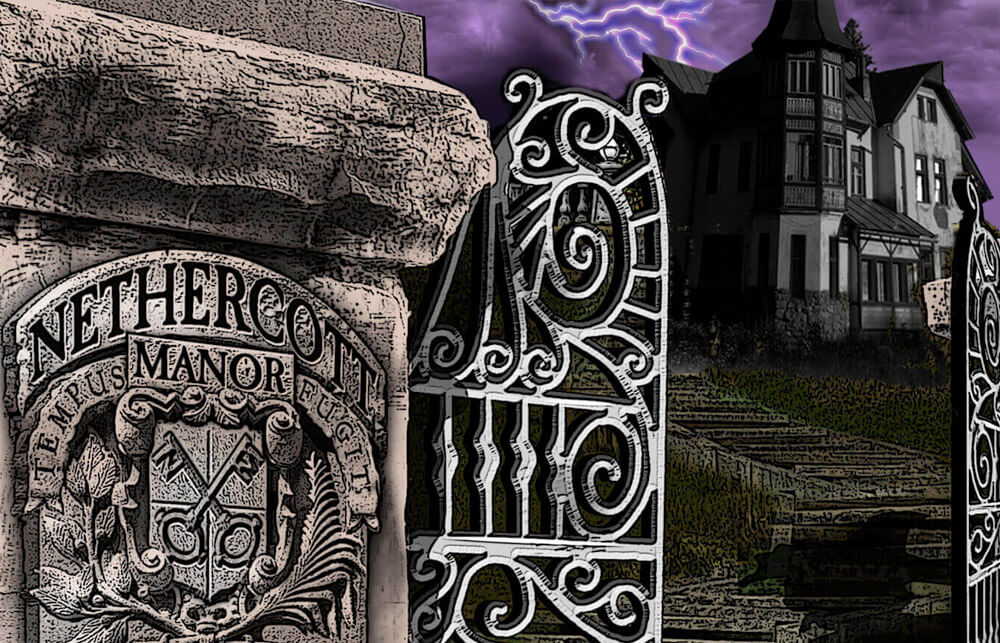 Back in 2016, Tulleys opened their first couple of games to plenty of positive comments. Two years later, the third game finally followed and, having heard even more accolades from enthusiasts, I was keen to go and visit to find out whether it lived up to the hype. In the end, it took a while to get along there, but we managed to combine it with the very last day of Shocktoberfest, their excellent Hallowe’en scare experience. While they may have a background in scare attractions, Nethercott Manor itself definitely isn’t scary, so don’t let that put you off a visit – although you will get some very mild jump scares during the game.

Parking is usually right outside the rooms, but be warned that, if you go during Shocktoberfest (or possibly other celebrations), you may have a longer trek. Inside, you’ll find a spacious waiting area with plenty of room for the three teams that may be waiting at any one time. There’s a quick intro from your GM outside, but the majority of the briefing is given in video form inside the game space. Expect not only to get told a bit about the story but also to receive the usual escape room rules in a way that makes sense within the game world.

Nethercott Manor has a beautiful start that creates a good transition into the experience. It’s a pretty scene that totally breaks your connection with the real world because there’s no way you’ll be thinking “well, this is just a room in a farm building”. Importantly, it also contains a small number of puzzles in a relatively contained space, which means beginners get a good introduction to how escape rooms work before they get thrown in at the deep end. And trust me, Nethercott Manor has a very deep end.

In fact, the decoration in that first space is just a taste of what’s to come. This is a beautiful and expansive set. As one of my teammates said, it felt like we were investigating a proper old house and not just an escape room. Few games have you exploring quite as much as Nethercott, and almost every new room surprised me. Using the layout of the building, they kept us constantly off balance and never quite sure, till almost the end, how close we were to finishing.

That sense of exploration covers for a relative lack of story in the game. You’re told in the intro that you need to find out about the family that lived in the house, but you don’t discover much more beyond that. In other ways, though, the story permeates the whole experience – exploring the manor and finding out a little about the family *is* the story.

In spite of that amazing set, they’ve still managed to make the puzzle side of the experience stand out. I wouldn’t say there was any one puzzle that amazed me, but what you do get is a constant stream of puzzles from the moment you walk into the game till the moment you finish. In fact, this has more puzzles than almost any other game I’ve played – expect to be solving one every couple of minutes if you want to escape, and some of those will be multi-stage.

So yes, this room is busy and, unsurprisingly given the puzzle density, much of it is parallelised. In fact, on several occasions I found myself working in entirely separate rooms from my teammates for extended periods, backtracking to a previous space to finish off a puzzle or two that we’d left untouched. Depending on your team, that may be amazing or terrible – I can imagine some people feeling frustrated by missing out on chunks of puzzles or stressed because they don’t want to split up and have so much to get through.

There are puzzles of pretty much every type you can imagine and, while most of them felt perfectly logical to us, our team found frustration with one particular challenge. It’s a type of puzzle that often annoys enthusiasts but, on top of that, they’d made it multi-stage, so the uncertainty from the first stage was amplified as we tried to solve the overarching puzzle. While divisive puzzles aren’t a terrible thing in escape rooms, I think it’s well worth making them relatively simple so as not to alienate players, as well as ensuring there’s a good mechanism to give clues to those teams who struggle.

The finale to our game was made a little confusing by some tech that wasn’t working during our visit. While this wasn’t a showstopper, it made the final puzzle feel a bit more tenuous than it should have done rather than giving us a confident ending to the game. In spite of that, it was still a very strong finish with some satisfying puzzling that allowed the whole team to get involved before a fun wrap-up.

Our team of four escaped with about a minute remaining having taken clues on four of the puzzles.

Nethercott Manor is an amazing experience. From the moment the game starts, you know it’s going to be something special. It takes you on an incredible journey through the family manor with high-quality decoration and an unbelievable number of puzzles. If you think you can cope with parallel tracks of challenges, then I’d highly recommend playing.

Even with four players, this felt like a very busy game. If you want to play as a three or even a two, then I think you have to be prepared to ask for clues regularly. Otherwise, there’s just too much to do. I think four or five people is probably the optimal for the game, but be prepared to use every second!