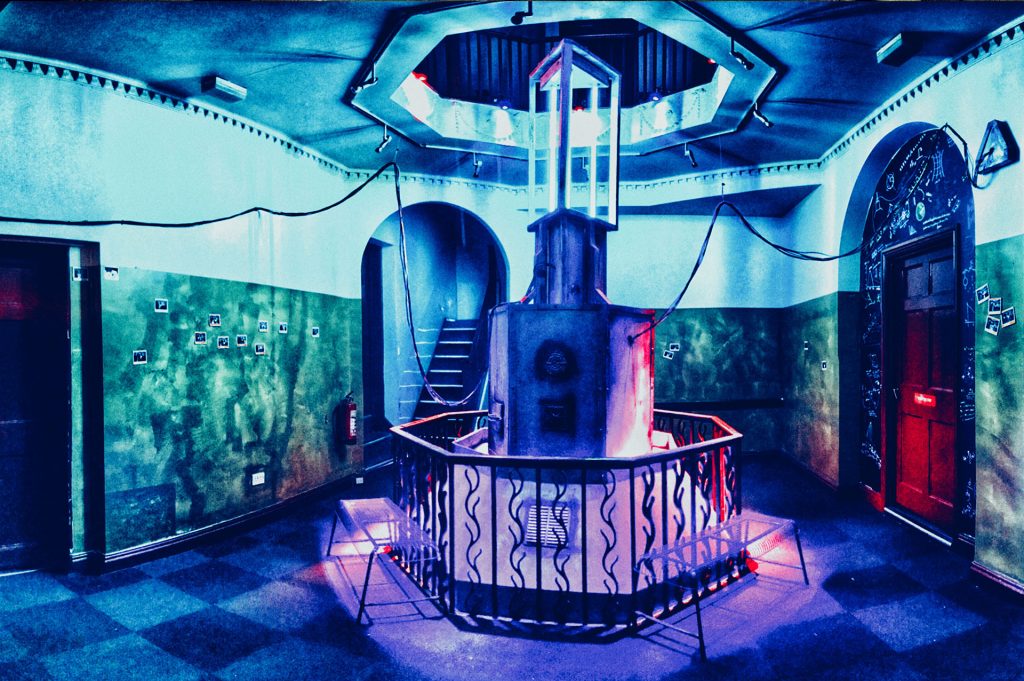 The East Midlands has a fair pedigree when it comes to escape rooms, and Unescapable is one of the companies that have driven that reputation. There’s no sign of that when you’re trying to find the location, though – just a nondescript door with a small sign above it and a flight of steps up to their main waiting area.

Once inside, however, you start to get a glimpse of what’s on offer here. Not many venues push their decoration outside the rooms themselves, but here they’ve taken pains to start the immersion early on. The literal centrepiece of their lobby is impressive both in its construction and in the way they’ve taken advantage of the architecture of the building. In addition, they greet you in character with a constant stream of conversation that sets you up for the journey to come.

I particularly appreciated their briefing for the room, which takes place in the time machine itself. It’s great that they take you away from the distractions of the reception and work hard on building that immersion to make sure your excitement levels are high before you even see the room itself.

We need to test that this portal works properly. We’re pretty sure that it does but we just need to be certain! From what we can gather Tommy has landed somewhere in the midst of the Western Front in 1917. There is a very significant chance/the slight possibility that the portal could break when you go through (but it probably won’t, don’t worry). If it does though, don’t panic, your team are just going to have to fix the time portal before the bridge collapses and you’re trapped in the past forever.

Given what I’d seen in the lobby, it came as no surprise that they’d created an interesting entrance to the game. In fact, the whole of this game was beautiful, recreating a WWI bunker in a way that felt impressively realistic given we were indoors. But it wasn’t just the visuals: there was a tactile nature to this game that helped with immersion too, and the audio track running throughout the experience plotted that perfect course of enhancing the game without dominating it.

However, where they really excelled was in their use of space, with a room that gave a real sense of exploration well beyond its physical footprint. I wouldn’t go as far as to say I got lost in the game – it’s hard to do that in any reasonably sized escape room – but I did feel slightly disoriented and, by making us focus on the space inside the game, they managed to entirely cut off our ties with the outside world. Aside from when the walkie-talkie squawked with a clue, I was fully focused on what was happening inside the experience.

There’s no real story to this game beyond what you hear in the intro: you’re testing out a time travel machine and just need to skip briefly into the past and back again to make sure it works. Spoiler: I wouldn’t bet money on it functioning perfectly 😉

The one weakness in the game was the number of puzzles. They were good, solid puzzles, including a couple of nice physical ones that felt at the challenging and fun end of the range. However, I feel they could have done with a few more of them. Yes, I’m sure there are people who fail to get out in spite of copious numbers of clues, but I suspect most enthusiasts will find this at the easier end of the scale and, with a room as pretty as this one, it’s a real shame to be leaving early.

It’s worth mentioning that there’s a potentially tedious search during the game where you have to collect a number of elements hidden round the space.  That was probably made worse by us being a two-player team. Truth be told, they were large items that we should have found more easily, but it still meant that, just as the game was reaching its dramatic conclusion, what we had to do felt significantly less exciting. Credit to them, though: they were relatively quick to offer hints, which I suspect reflects them wanting to maintain the energy of the game.

There’s a high pressure finale which is probably a love-it or loathe-it ending. I found it challenging in a fun way, but I can imagine others who would find it frustrating. It’s probably also worth mentioning that it lends itself less well to getting clues than many puzzles so, if you’re very short of time… well, just don’t be very short of time.

Our return to the present day came at around the 35-minute mark. We were aided by a couple of clues along the way, which were delivered via walkie-talkie.

Unescapable have a theatrical background, and that shines through in what they’ve produced: a beautiful, sprawling experience which immerses you in the story from well before you enter the room right to the very end.

We played as a two, which I think is perfect for enthusiasts. If you’re the sort of team that enjoys the experience more than the puzzles, then you could certainly go higher but, if puzzles are important, I’d stick to three enthusiasts at most.