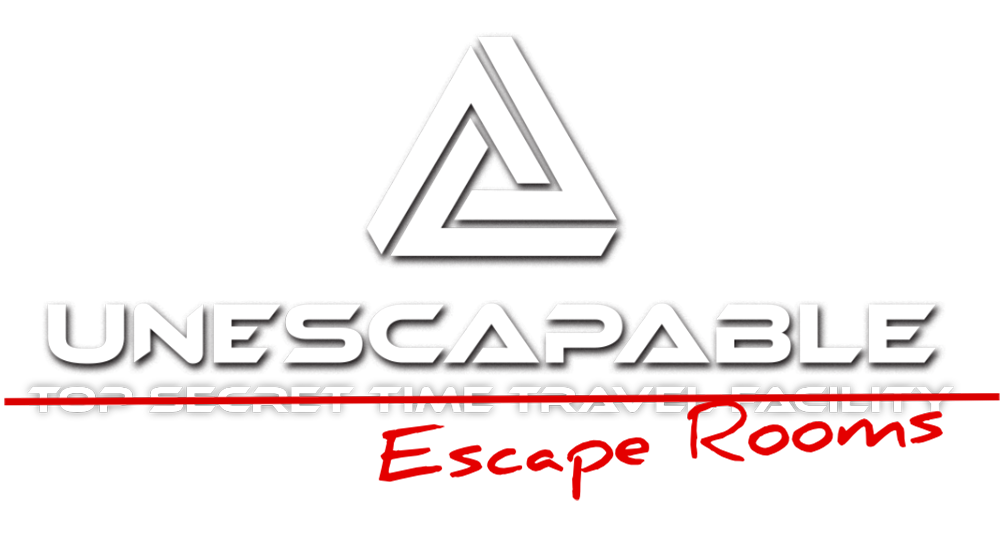 After having plenty of fun playing Tommy, it was time for the scarier game at Unescapable: Edith. There are plenty of scary games in the country, but the description for Edith hints at something that pushes things just a little bit further than most other venues. Certainly, Mrs Logic was less than impressed when she found out that an actor might appear in the room…

Perhaps to calm the nerves, perhaps just to delay the inevitable, we took a few minutes to look round the walls of the waiting area, which are adorned with photos of previous  players. It’s a welcoming sign to see lots of happy faces, not to mention a range of times that suggested the room would be fair – there’s nothing scarier than turning up to a room where all the escapees have times of 59+ minutes.

When we first open a time portal we send one of our scientists back to make sure everything is ok and it is all safe and stable – we sent Edith, but unfortunately she hasn’t returned… We’ve now lost communication with her, but we do know that she was trying to shut the portal down when something stopped her. We need your team to finish the job – we would go ourselves but we’re too scared.

After another impressive introduction and fun entrance, we found ourselves in a fairly standard-looking escape room: a reasonably sized space with a few things to investigate and the lack of light that you might expect in a scary room. In retrospect, I shouldn’t have expected a room that was scary from the start – that’s not their style. The theatrical background means they have to leave you, suffering, aware that something may happen at any moment.

Eyes darting around the space, we started to investigate. Where Tommy had come across as incredibly polished, this game felt a little rougher round the edges. Perhaps that was because they were trying to give a slightly less pleasant environment to amplify the horror element, or maybe it was just because they could get away with it in the lower lighting. Either way, most of the time you’re not paying attention to the minutiae, so it didn’t have as much of an effect as I first imagined when entering the room.

What they did have in spades was a sense of exploration. That’s great in an average room but, in a game with an actor, that sense of exploration turned into a sense of anticipation (or trepidation!) as we moved around the room and discovered all its secrets. Each time I was impressed by what they’d created, they managed to step it up another level. It’s all the more impressive when you look at the space the game sits in which, in hindsight, makes it look a tardis-like endeavour. Add in the darkness, and they really have created a series of spaces that will set even the toughest of people on edge.

Fortunately, that darkness didn’t have a significant effect on the puzzles, with just a single example where we found it really had an impact. Having said that, the truth is this wasn’t really a puzzly room. As with most scare-based escape room, there were relatively few challenges, with the game instead taking advantage of the extended time it would take scared players to solve each puzzle. What it did have was good puzzles – maybe not difficult but at least logical. Enough to keep you occupied but not so many as to make me lack confidence in teams escaping. The one exception was a puzzle near the end that felt like it amounted to little more than exchanging a key for a key. Perhaps that was deliberate, but I think the game would be better for a slightly more cerebral challenge.

Of course, this review would be avoiding the (metaphorical!) elephant in the room if it didn’t talk about the actor. This isn’t the sort of game where the actor just makes a token addition to the experience – here they play a significant, extended role in the game and one that will likely cause you, if not to feel scared, then at least to have a significantly increased heart rate. They played their part to perfection – singling me out as worthy of extra attention and knowing when to back off from Mrs Logic while still not leaving her entirely on her own (aside: if you could avoid throwing things at them like she did, they’d probably appreciate that…). There are moments in the game where their interaction is so simple and yet so utterly effective. This is scare by intelligence and not just by having an actor in your face.

I was a little nervous that we might have a disappointing ending when what turned out to be the penultimate puzzle felt a little bit flat, but I really liked the final challenge that still lay in store for us. It was an adrenaline-packed way of ending the game by involving the whole team with a relatively simple puzzle which saw us rushing round the space one final time before heading back into the time machine portal. It’s exactly the sort of puzzle that should end an experience like this.

We escaped in around 40 minutes having taken two clues, which came over a walkie-talkie. Remember not to leave it behind as you’re rushing from space to space; otherwise, that scary experience may get even scarier…

Edith was a fantastically scary game that I’d recommend to anyone who likes that genre of room. There’s a wonderful sense of exploration that, when combined with the actor interactions, really help make it an intimidating experience. Yes, there aren’t a huge number of puzzles but, for me, there were just enough.

We played Edith as a pair, which was perfect for maximum scariness and puzzle involvement. If scare games are your thing, then I’d implore you to play it in that size of team. If you’d prefer something a little less adrenaline-inducing, then booking in with four or five people may be a good option, but be aware that you won’t get to solve many puzzles.