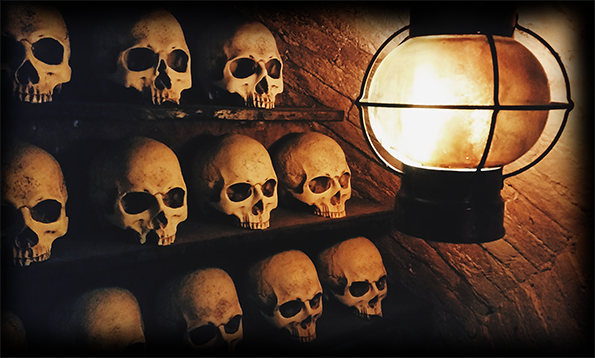 This is part of a series of articles on games in Amsterdam – a link will be added here when the summary article is published at the end.

Logic Locks has a strong reputation in the escape room community. As one of the early pioneers in the Dutch market, they managed to create a game that was far better than typical rooms opening in the UK at the same time. The Catacombs is their latest offering, launched just over a year ago but, by all accounts, under constant refinement to perfect the experience. It’s located in an entirely separate part of Amsterdam from their other room, so it’s worth making sure you’re heading to the correct address.

You’ll know you’re in the right place, though, because you’ll find yourself outside a church. Yes: this game with a slightly demonic theme is set in the basement of a religious establishment. I’m impressed they got permission, but it was definitely worth it for a company that’s aiming for serious immersion.

It’s worth making sure you read the emailed instructions carefully, because they give you detailed info about exactly when you’re meant to arrive and what you should do when you get there. Enthusiast tip: the bell they refer to is on the outside gate and not the door, a fact that left us confused for longer than I’d like to admit.

Once inside, we were greeted by a GM who delivered an introduction that seemed to skip in and out of the game world. At times, it felt like we were acolytes called in to try to investigate the strange goings-on, but at other times we were clearly players of a game. It wasn’t a big issue, but I was surprised by that lack of consistency from a company with Logic Locks’ reputation.

Soon after, though, we were greeted by an in-game character, and the immersion built quickly. He set up the drama of the situation, guided us to the starting point and made appearances at various points throughout the game to help build the excitement. In fact, immersion is the absolute central pillar of this game, and it’s built up not just through that acting but through the subterranean spaces you’re in, the props they’ve added and pretty much everything you encounter during your ninety-minute experience.

In some ways, I didn’t get a strong sense of story from the game. While there was a clear demonic theme to the experience and we had to investigate the catacombs to find out whether something supernatural was happening, I didn’t feel that I was piecing the snippets together into a bigger narrative. On the other hand, we absolutely lived an adventure – our fate hung in the balance, precariously oscillating back and forth as the experience unfolded around us. Add several pieces of theatre to the mix, and you definitely come away with a sense of story, but it’s much more like you’ve lived a small part of it than like you’ve read or been told a full tale. For me, that contrasted hugely with their first game, which saw you finding out a huge amount about the life of the protagonist throughout the experience.

Surprisingly for a game that’s scary (and it is scary!), there are plenty of good puzzles to keep you occupied. The fear factor ebbs and flows throughout the game, and they’ve carefully choreographed it so that the majority of the puzzles come at points where you’re feeling relatively safe. Not only were there enough puzzles but they were logical and they gave good feedback to the players when they’d been solved – I always knew whether or not our solutions had worked.

My biggest complaint across the game was the ratio of searching to solving. I didn’t feel like we were clever very often, but I did feel like we spent a disproportionately long time looking round the space for specific items, which detracted from my overall experience.

The moments of theatre in the game are particularly interesting to me. More than once during the experience, someone is singled out from the group. Usually, I see that as a negative, because the rest of the team miss out on something special. Here, they’ve managed to create a more balanced structure such that the whole team is actively involved in what goes on. Each side gets a very different experience, but both are interesting and memorable. My one complaint on that front is that the same person can be chosen not through the team’s choice but by the nature of the game. I think that’s unfair for the rest of the team and also means that the singled-out player misses out on one particular aspect of the experience.

The finale is where this game cements its place as one of the best in Europe. It’s simply stunning. They create chaos. Panic. They build up the noise to the point where you’re uncertain what’s happening. They terrorise you and then, right in the heart of the action, in the only way possible, you find out whether you’ve won or lost. Legend has it that there are two entirely different endings and the failure mode is better than the winning one. I didn’t get to see it, but it really wouldn’t surprise me.

One thing that still bemuses me about this game is that they give you a score. They’re clearly catering towards enthusiasts, and I can see the attraction, but it makes no sense to me. Those points, which you only receive once once you’ve finished, don’t make any sense in the game and feel like an arbitrary metric which is destined to make most teams feel like they’ve failed in too many places. What it did do for me, however, was ensure that I felt like we truly deserved our win. This is not a game which gives away its victory – at least not as far as I can tell.

I enjoyed The Catacombs immensely. For me, it’s primarily a theatrical experience with an escape room premise to help give the players a form of agency in the game. It’s a very good escape room, but I think you could still have much of the fun in here if you let someone else solve all the puzzles and you just came along for the show. If you’re cool with a scary theatrical experience and will still be able to solve puzzles in the midst of that (or you are with someone who can!), then sign up.

We played as a six, which was too many to fully appreciate the escape room aspect of the experience. If you want to progress quickly, I think four is probably a better number, but it’s worth saying that there’s no inherent reason why you should want to race through the game. This is one of those rooms that is probably worth savouring.

That’s all on The Catacombs – want to read more about other local games? A link will be added here when the summary article is published at the end.