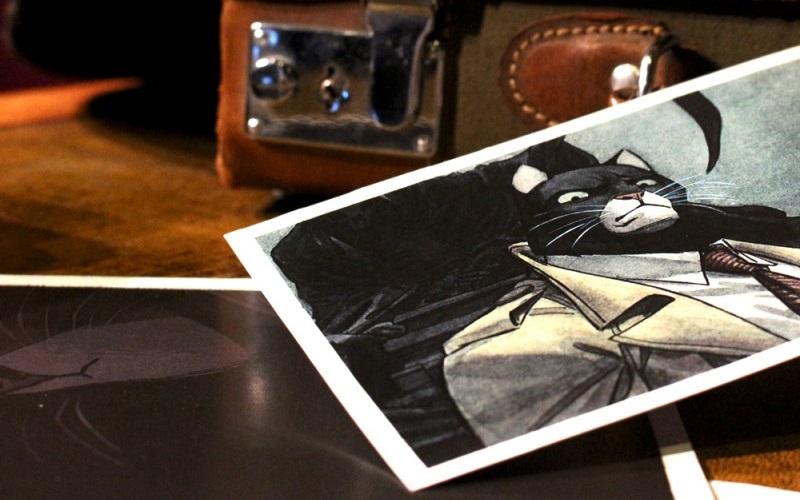 After a great time visiting Escape Prod in 2017, we were excited to head back and see what they’d produced in the intervening year. Last time round, it had been a game called Les Daltons, based on characters from the relatively lighthearted comic Lucky Luke. Since then, they’ve released another one based on Blacksad, the film-noir comic starring a detective cat. Yes, really. They’ve also added a treasure hunt to their offerings which sees you tour the city for around 90 minutes and solve some puzzles along the way.

We’d opted to play the escape room first before venturing onto the streets of Brussels, so we headed to the back of the reception area, where you get to choose your detective outfit before entering the game. A brief intro from the GM and we were on our way.

Their first experience had felt cartoony from the second we’d walked through the door, but Blacksad has a very different vibe, caricaturing an old-style detective office. A more serious game that, I suspect, reflected more serious source material. The result was a room that felt more conventional, with us trying to break into Blacksad’s archenemy’s hideout and steal some critical evidence to exonerate our feline hero. Conventional, maybe, but still enjoyable to be in. This isn’t the sort of game where you’ll be amazed by any given prop or decoration, but everything was consistently high quality, which really lifted the experience.

We were thrown straight into the action with relatively little warm-up but, as became a theme through the game, we were delivered enjoyable puzzles that replaced padlocks with more interesting ways of interacting with the set. It’s generally fairly linear, so I wouldn’t suggest enthusiasts take a big team, but I was impressed by the variety of puzzles on offer, so a breadth of talent isn’t a bad idea.

There were many fun puzzles in the adventure, but I particularly appreciated a couple where the actions you had to take for the solutions represented real actions in the story. It’s always an enjoyable experience when you feel that you’re not just playing a game but are entwined in an adventure. There were a couple of what I felt were rough edges – once when we solved a puzzle but there was little feedback about what to do next, and another where it felt overly confusing with relatively little signposting about what to do. However, those were very much the minority: fun puzzling was absolutely the norm here.

It’s amazing how sometimes it’s the small details, ones that don’t impact the game itself, that can really add to the immersion of the experience. In Blacksad, as we approached the finale, I liked that they’d added more than a simple “escape the room” element to the experience and had a genuine quest for us to perform. But the part that really stands out is something pretty innocuous that they tell you during the briefing but adds some theatre to proceedings. For me, that final section was let down ever so slightly by being a little too convoluted but, overall, this is still a very solid room that I’d thoroughly recommend to enthusiasts.

Treasure Hunt – the Secret of the Manneken Pis

Let’s get things clear right from the start: this isn’t an escape room. While it absolutely contains escape room elements, it’s predominantly a treasure hunt. That’s not in any way meant as a criticism – it’s just important to have your expectations clear. Think of it as a small set of escape room puzzles embedded within a treasure hunt which is itself spread across a nice tour of the city.

And it really is a nice tour of the city. I’ve been to Brussels on many occasions, and this game does a great job of taking you around the major sights of the Belgian capital, letting you see lots of attractions without forcing you to pore over any of them in detail. By giving clear instructions (I doubt we went more than 100 metres without getting some sort of hint that we were on the right track), it allowed us to focus more on the sights and less on making sure we hadn’t got lost. Yes, we took wrong turns a couple of times, but it was very quickly clear that we’d made a mistake.

It wasn’t just in the normal tourist attractions that they’d done well. The thing that really impressed me was when they showed us the hidden details of Brussels that tourists would be unlikely to see. Little nuggets hidden around the city that brought a smile to my face.

The puzzle part of the experience revolves around a journal, from which you get directions and instructions, and a backpack which contains the physical items that form part of the puzzles. Every fifteen minutes or so, we’d solve a puzzle that gave us access to another part of the rucksack and progress our journey. They weren’t amazingly challenging, but they converted what would otherwise have been an above-average but still fairly run-of-the-mill treasure hunt into something much more exciting. That sense of phsyicality and discovery which I love in escape rooms was a great addition here.

It’s worth mentioning that the backpack was really well designed. That may seem an odd observation but, given it was so central to the game, it was nice that they’d put the effort into creating something that didn’t just hide things behind a series of locks but did so in an elegant manner.

The one thing the game lacked was a satisfying finale. The final puzzle felt a little more of a stretch than most and didn’t feel like it naturally pulled together all the previous stages of the experience. That said, it was still a reasonable final reveal in the context of a city tour game and rounded off a fun wander round the city.

We finished in just over an hour, but I could easily see this taking the full ninety minutes if you’re ambling round the town. Clues came in the form of a series of envelopes. At one point we did make use of them to clarify whether we’d got the answer or not. Worryingly, they didn’t help at all but, in retrospect, that was because they aim very much to help at critical parts of the puzzle rather than on every step. If you find the same issue, just move on to the next trail – if the info you’ve collected is important later, you’ll get the help you need at that point.

That’s all on Escape Prod – want to read more about Brussels games? Click here to head back to the main Brussels page.