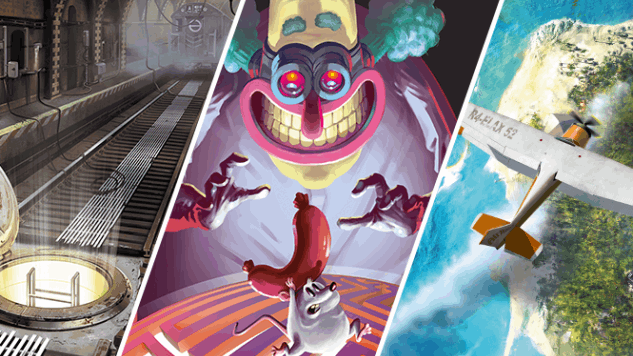 Unlock! have built a strong reputation among enthusiasts with their escape rooms in a box. Heading in a different direction to all the other companies, they’ve packaged them up in sets of three games. I don’t know the reasoning behind that, but I can’t help but wonder if the idea of a £25 game that you can play three times fits better with board game enthusiasts than a £10 game that you can only play once. Whatever the reason, that means you get three games (plus a demo) in this box: Squeek and Sausage, The Island of Dr Goorse and The Formula.

The first thing to mention is that, in order to play these games, you’ll need an app. Some escape rooms in a box use a companion app or website to provide music, timing or even hints, but here it’s a central pillar to the game. The way you unlock padlocks, get clues and interact with machines requires you to have the app. That’s good because it means they can update things to take into account user feedback, but it also means that, should you forget to download it before the game (or should it ever drop from the app store), you might not be able to play.

But what of the games themselves? Well, overall I found them interesting. There was a genuine escape-room feel, with you having to search the space for hidden items, solve a variety of fun and not-too-difficult puzzles and explore the environment. The big missing item is a story – I’d describe the three games as having a theme but not real stories. Don’t expect much of an intro or for the narrative to develop during the game. At their heart, these are puzzle experiences. That didn’t bother me, though, because each game had a strong theme and resulting personality that I found engaging.

Where Unlock! fell down for me was in the game mechanics. If you accidentally discard a card before you’re meant to, it’s very easy to get horribly stuck. If you do get stuck, there’s no walkthrough. Instead, you get help by inputting the number of the card into the app. That rarely proved useful for us and on occasion gave clues from further down the game, effectively slightly spoiling a puzzle. On occasions, we got stuck in a place where there was no corresponding card to get a clue with, which left us particularly frustrated and eventually having to resort to flipping through the remaining clue cards to work out where we were going wrong.

That’s not to say that there weren’t also great game mechanics. The ability to add cards together to indicate you were combining them was a great way of capturing that side of escape rooms and, while we found the time penalties for combining things incorrectly annoying, I could see what their goal was, and you could always choose to ignore them.

For me, the puzzles they exposed in Unlock! were more closely aligned with traditional escape room puzzles than most of the offerings I’ve played. They hit that Goldilocks of puzzle difficulty where it wasn’t amazingly hard but also wasn’t trivially easy. Inevitably, they tended towards paper puzzles, and I was left feeling like I’d really missed out on the physicality that is a big part of escape rooms and which some other games in a box have at least tipped their hat to with physical components.

In the end, when Unlock! goes well, it’s a lot of fun, with some cool game mechanics (including a split-start game in one of the experiences) but, when it goes badly, you can get almost irretrievably stuck. Fortunately, there’s now a walkthrough article on Board Game Geek that does an admirable job of filling that hole so, armed with that knowledge, I’d encourage you to jump on board and try the game out.