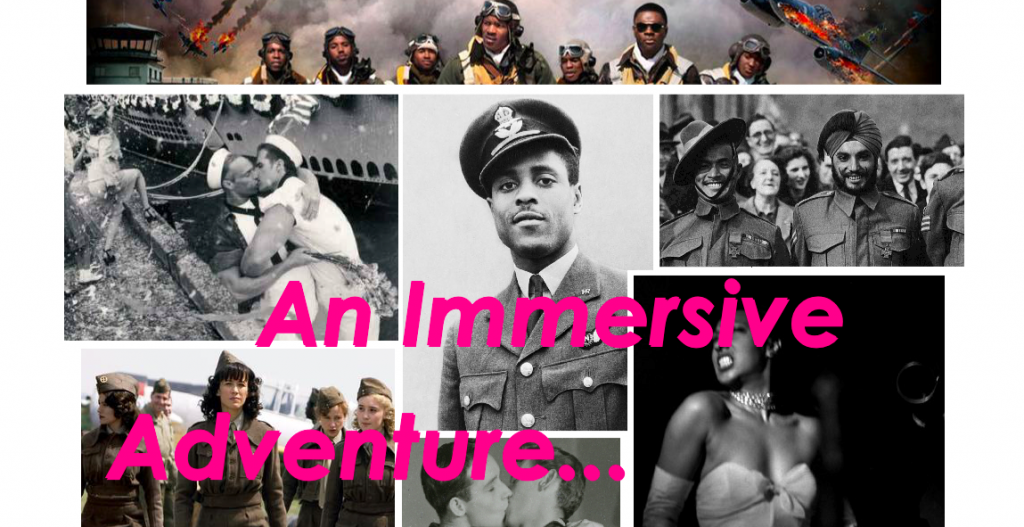 When I first heard about Hidden Figures, I was immediately intrigued – immersive theatre, including a mini escape room and a diversity angle? Sign me up! It’s another of the small theatre companies operating out of the CoLab Factory, a space operated by CoLab Theatre but which hosts a variety of immersive experiences.

As with many of the games at this venue, they welcome you at the door with a code phrase and, from that moment on, it’s immersion all the way. Our host, Archie, greeted us in a slightly antagonistic manner, which caught me off guard. It’s one of the awkward parts of immersive experiences – that feeling that you don’t really know how they want you to act. In my heart, I know that they’ll handle whatever I throw at them, but it still feels like a cruel way to get things off the ground. As a first taster, I’d far rather have had them ease me in more gently.

Soon enough, though, we’d been led inside and back to the 1940s, when Britain was at war and in desperate need of field operatives. Each of us took on a character that was about to enter basic training, allotted to us in an amusing way that caused us to – at some level – identify with our new persona. I liked the way they managed that aspect of the game, choosing a character for each of us and then giving us additional information at a couple of places during the experience. It helped to cement my adopted character in my mind without overwhelming me. And the information wasn’t just colour: we used it actively during the game. Perhaps not with necessity, but certainly with expectation.

The game itself was composed of three parts, which I’ll label “the theatre”, “the escape room” and “the decision”. It wasn’t an even split, but it was a nice balance and, while I’ve suggested they were discrete concepts, in practice theatre obviously ran across the whole experience.

Coincidentally, a lack of something binding the experience together was probably my biggest criticism of the show. While each individual part was fun, I found the game slightly disjointed. I wanted to feel there was an overarching mission and, while to some extent there was, I think they would’ve presented a more coherent experience if they’d spent a little time at the beginning explaining what our “training” would involve.

The theatre was fun throughout, with all the actors giving solid performances and a couple really standing out. There was one element that left our team a little underwhelmed, but it served its purpose and, at only a couple of minutes per person, it certainly didn’t damage the overall experience. It’s worth pointing out that they handled our group of six well. When one person was the centre of attention, the remainder of the group were still catered for, with the actor obviously thinking about how to make that interaction enjoyable for everyone.

Of course, regular readers will be interested to hear about the escape room.  (edit: The aspect I disliked has now been removed from the experience). The rest of the game was reasonable, if not exciting. There’s a lot to get through in the fifteen minutes – even ignoring the bonus puzzles – but there’s an actor on hand to help you through. It’s a small space, so be warned that, if you do go with six people, you’ll be getting in each other’s ways a lot.

The decision is the final part of the game and sees you thrown into the field and having to make a choice in a life-and-death situation. It was an interesting idea, although it felt a little strange when compared to the rest of the experience. If we hadn’t known each other, I think it might have been a little different but, as friends, I was left feeling like it didn’t really add anything.

With that done, it was back upstairs for the final debrief and a bottle of bubbly served in a fairly spectacular manner. That final debrief is probably the highlight of the evening, delivered in a way that breaks the immersion while in some ways managing to make you feel more immersed than ever. It was the ending that this show needed, and it rounded off an enjoyable evening on a poignant note.

Full disclosure: I wasn’t charged for my ticket. That doesn’t influence the review – you can read more on the About page.