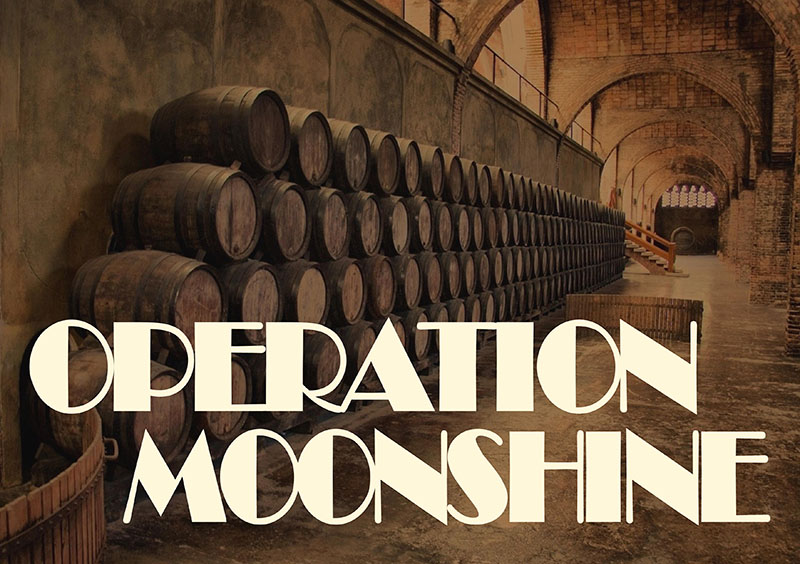 Having just finished the Escaporium‘s second game (and after a quick trip to the sweet shop!), we were back over the road to experience their original room, Operation Moonshine. Prohibition-themed games are surprisingly rare, which I always feel is a shame because it’s a strong theme with authentic props that are easy enough to come by and that provides plenty of excuses for lots of dark wood furniture to carry the era.

This venue is far more spacious than their Piece Hall premises, with enough seating for a lot more than the single room they currently have. I believe their plan is to open additional games in the future and, judging by the amount of seating, that won’t just be one or two extra.

Before beginning the game, we got a quick introduction: we were new recruits to Bugsy’s gang and, as part of proving ourselves, we had to help take down Capone. All we needed to do was break into his hideout, find his secret speakeasy and retrieve the map with the location of all his other similar establishments.

It’s the tail end of the Prohibition era in Chicago and Al Capone has a stranglehold on all the Bootleg liquor in the city. As the newest members of Bugsy’s gang, Da’ Boss needs you to prove yourself and steal something right from under Scarface’s nose! Don’t let him down, or you’ll be sleeping with the fishes!

Right from the start, Operation Moonshine is a well presented room with good props and decoration that convey the prohibition theme well. Even better, it improves from there, with one of the most amazing centrepieces I’ve ever seen in a game. It’s totally unnecessary to the gameplay – they could have done away with it entirely or gone for something much simpler – but it makes the statement that this is a serious endeavour. It also alters the layout of the game in a way that enhanced the experience without directly affecting the gameplay.

There are lots of puzzles in the game, with plenty of variety to keep the whole team interested. It’s very much an open room with – it seemed – many puzzles on offer simultaneously. It still felt like we were able to work in parallel right up to the very last set of puzzles, which is a pretty rare experience. There was also a fair amount of searching to be done, which probably enhanced that feeling of busyness in the room – it’s not a game where you can afford to dither. A couple of the puzzles were hands-on physical challenges and, while they never required any skill, they were still nice interactions that connect you with the room.

While we were playing, it felt like there were a couple of leaps of logic: puzzles with solutions that, while kind of making sense, felt like we’d never have been able to solve them without help or a stroke of genius. Discussing this with the owners afterwards, it became clear that we’d actually missed some very nice direction that hinted at the puzzles’ existence. So if a puzzle doesn’t seem logical, it’s likely you’ve simply missed something rather than having found a flaw in the room.

There’s a great finale, more theatre than puzzle, with a good reveal before you race out of the room.

We escaped having used a couple of clues. They came in over a screen, which was sometimes not in the most convenient of locations, but did the job well enough.

Perhaps the prohibition theme attracted me more than learning about Halifax, but I found this a more engaging room, with beautiful decorations and puzzles that held my interest until the end of the game. It felt fairly busy, even with four experienced enthusiasts, so I’d suggest you go along with around that number, although one more or less would probably work. The owners very clearly want to make sure you have a good experience so, even if you went along as just a couple, I think you’d be fine.