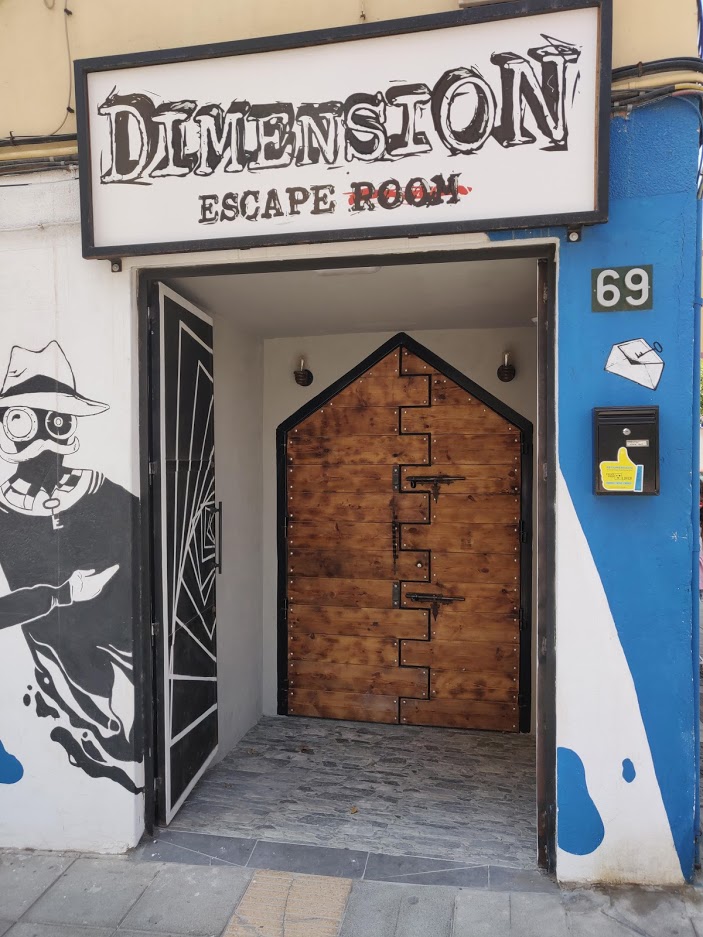 Almería is a long way from where we were staying in Andalucía. Surely visiting it for an escape room was a silly idea? Well, it was until I heard multiple people raving about a Mad Max-themed game, saying it was one of the best they’d played. Admittedly, it was only available in Spanish, but I was fortunate enough to be accompanied by three native speakers, and I have passable knowledge myself.

Turning up at the front venue, it felt like we’d probably made a good decision. There’s a beautiful wooden front door next to a huge mural of the company’s logo. There’s clearly some artistic expertise behind this location, and I was keen to see how that transferred to the game.

What really attracted me to it, though, was the idea of a game based around Mad Max. I’m a fan of post-apocalyptic stories and was intrigued about how this particular theme could be converted into reality. The answer is with serious amounts of machinery. They’ve created a space that feels like a futuristic garage filled with things that you might scavenge from across a post-disaster wasteland. This isn’t a beautiful space to be in. It’s not a place that I found relaxing. What it is is very well delivered to transport you to this future dystopia.

There’s a story behind this game, but the real focus is on the mission. You need to find out where the secret nirvana in the desert is and work out how you’re going to get there. This created a sense of purpose in the game reinforced in the middle of the experience with a fantastic reveal that is likely to impress even the most experienced team. During the second half, when you have a clearer idea of your goal, the puzzles take advantage of that to effectively signpost what you’re meant to do. Indeed, I cursed myself over the one clue we took, because it was such a natural step on our journey that I should have realised it would be necessary.

There were fun puzzles throughout the game, with the exception of one challenge that felt pretty tedious. We more or less knew what we were meant to be doing, but the instructions left me feeling almost as confused as before I’d read them. Overall, though, we enjoyed what was on offer, and there were a couple of neat moments that took us by surprise.

Although the biggest reveal was halfway through the game, they still managed to deliver an impressive finale. It was a really neat way of creating an ending for this game that displays creativity and a sense of theatre.

La guarida de Máximo Max is a fantastically themed room that really carried the idea of being in a Mad Max movie to the players. There’s a clear mission from early on, and the puzzles co-exist with the theme in a way that makes both stronger.

We played as a team of four (including two young children) and escaped in around 52 minutes. Spanish-speaking enthusiast pairs should be fine to take this game on, but I’d probably recommend three people unless you’re feeling pretty confident!