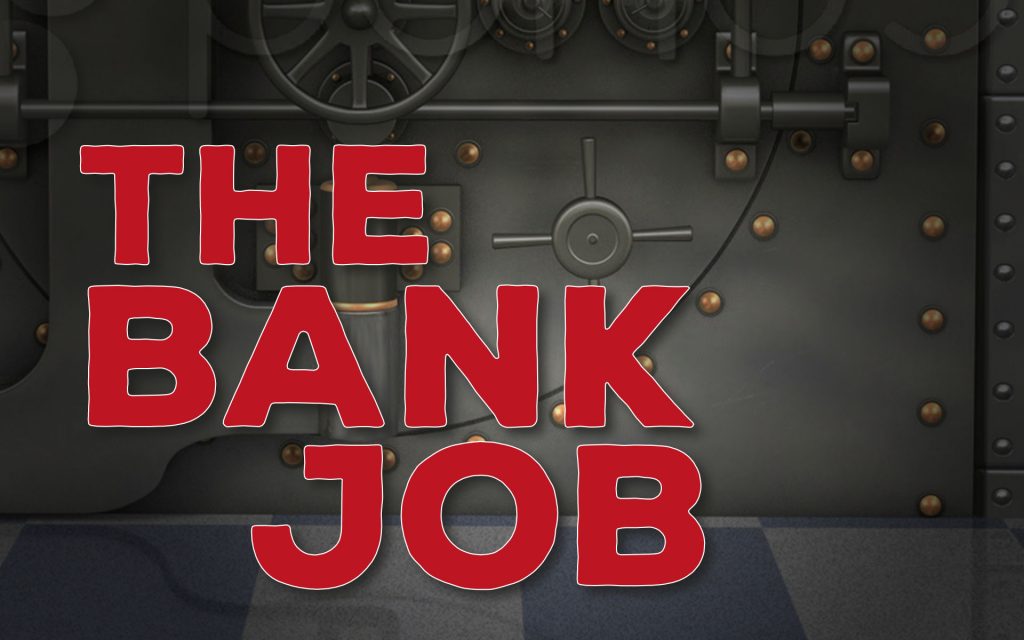 Enigma Rooms has slowly expanded across Yorkshire and the East Midlands over the last couple of years and, judging by their website, that expansion is starting to accelerate. Sheffield was their second location and still retains the feeling of being a small business rather than part of a chain.

A big part of that was the owner/GM, who had a great attitude towards the business. Many places do well because they’re run by escape room fans and the enthusiasm shines through but, at this venue, it was the absolute focus on the customer that enhanced the experience. It was clear that he cared about everybody’s experience regardless of whether it was their first time or their hundredth.

First up was The Bank Job, which was preceded by a surprisingly involved briefing. There were strict instructions on how to enter the space, what to do if we heard an alarm (fire vs game), how to enter locks in padlocks (forwards and backwards!), and the fact that we’d find around 20 keys during the game but it would always be clear where to use them… It’s a bit intimidating, but listen to what he has to say and, once in the room, it should all make sense.

After years of planning you and your crew have planned the perfect bank job. All you need to do now if pull it off!!

As the intro makes clear, you have to follow the instructions very carefully when you enter this game. Failure to do so will mean wasting valuable time and energy, but the flip side of that is an opening scene more real than most others in the vast majority of escape rooms I’ve encountered. That thematic start to the experience makes it feel a bit more like an adventure, and you’re quickly presented with a couple more challenges that help keep the adrenaline levels high as you explore the space and gain access to the bank.

I’m torn with how to review the decoration in this game. No one is going to mistake it for a real bank, but they’ve clearly gone to some trouble to create a backdrop that gives the essence of a financial institution. Each space has a few themed items that help convey the specific part of the bank you’re in. That worked well to give a real sense of exploration and progress, starting from outside the business and slowly working our way to the final goal: the central vault and – more importantly – a bar of gold.

Along the way there were obviously a fair number of puzzles to overcome. These varied significantly in quality, sometimes seriously impressing me in what they’d created and sometimes plumbing the depths. The low points were definitely where they’d chosen to write codes in marker pens on props. I play these games in part for the mental challenge they offer and, while searching carefully to find a code can be fun, that particular trope was used all too often, and the use of marker pen gave an amateurish look to the experience. The interesting thing, however, was the contrast: where that mechanic wasn’t used, there were some high-tech puzzles that would have been great additions to almost any room. My assumption is that those weaker puzzles were added later to provide some quick wins for players that may be struggling with the rest of the room.

In an ideal world, I think that would have been the whole of the game, but I’ve totally skipped over the bonus challenge. You’re told before entering the space that, locked behind a set of three-digit padlocks, is some bonus loot to pick up during the game. Throughout the experience, you’ll find corresponding codes written on the props and decoration. As I’ve mentioned above, the writing looked out of place in the game and with ~12 padlocks, there was a lot of trying codes in multiple places (especially for a team of only two).

To be honest, that would have been fine but for the fact that we had to enter some of the numbers backwards. Worse still, we had been told before going in that three of the codes were red herrings. So, in order to get all the bonus items, we’d need to find all the codes, try them on each padlock in both directions and, in some cases, go through all the padlocks trying a number in both directions only to find that it was one of the red herrings. Usually, I’d revel in a bonus game, but here it just wasn’t an exciting way to finish the experience.

Fortunately, that’s not the way you finish. The last thing you do is escape, and that means watching the clock while trying the bonus padlocks and then making a mad dash for it when you feel time is short. Because of the nature of this game, it’ll take you more than a few seconds to get out, especially in a larger team, so you get a fantastic adrenaline rush to finish things off – just the way it should be at the end of a heist.

We escaped with a few seconds remaining having gathered 7 bags of cash.

The Bank Job is an unusual game. It’s got a great entrance, some cool props and a bonus mechanic that will push most teams all the way, but those marker pen “puzzles” and tedious padlock entry took the shine off for me. Ironically, I think the game would have been better without the bonus section, even if that meant some teams finished in a little over half an hour.

I’d recommend playing as a group of three enthusiasts. That will give a nice balance between getting fully involved and having enough brains and hands to solve the puzzles and complete the searching.