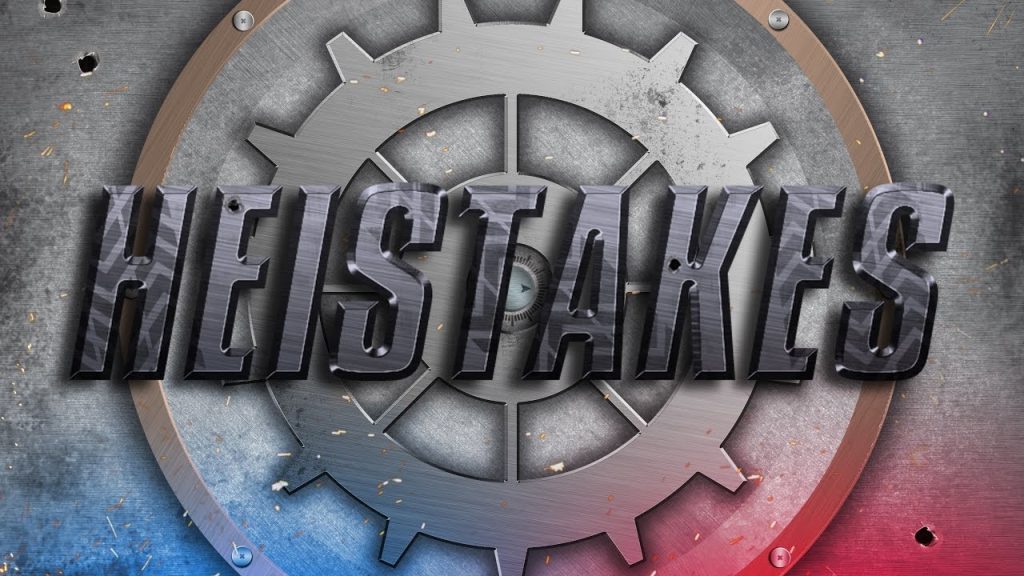 It had been a year since we’d played the first six of Escapologic’s games in Nottingham, and I was keen to see what they’d produced in the meantime. Unfortunately, Robin of Lockskey was down for extended maintenance, so this was only a brief stop to play their second most recent game, Heistakes. They’ve always gone heavy on the immersion, often creating quite dark themes with relatively little use of technology to drive the games, but I’d heard that this would be a little different. Only time would tell…

As always, the staff were incredibly friendly, and it wasn’t long before we were whisked across the street by our GM to their secondary location, where their four newer games are.

After a daring bank heist goes incredibly wrong, can you finish the job?

Five very different criminals were brought together to accomplish the impossible, break into the high security vault underneath Scelus Bank and steal whatever is inside. The operation did not go according to plan and the five have found themselves in police custody, on the run or even worse, dead!

Were they set up by the mysterious leader known as Xander and if so, to what end?

Now is your chance to assemble a crack team of your fellow criminals and take on the most heart stopping heist in history. Will you crack under the intense pressure or will you escape before the police turn up? Heistakes is our seventh room here at Escapologic Nottingham. Using an actual vault as the setting makes Heistakes one of the most realistic and immersive heist themed rooms in the country.

With the help of two anonymous hackers your task is to finish the job before the authorities return, the clock is ticking and you’re running out of time!

Heistakes opens with a bang, metaphorically speaking at least. The first scene is impressive, and the trouble they’ve gone to for what is a relatively small part of the game speaks volumes about how important immersion is to them. This is a heist in the fullest sense of the concept – taking you through the entire experience from before entering the bank to after you’ve made your getaway.

It’s not just the intro, though. The high quality visuals extend throughout the game and, while much of it is surprisingly minimalist – at least when compared to their other rooms – that works well for the theme. Instead, they’ve put their efforts into big, chunky centrepieces to catch your eye. The one downside of that comes if you get stuck. Usually, when you hit a roadblock, you can resort to re-searching the room, which may throw up a new clue but, more importantly, gives you some time to mull over your ideas. Here, however, when we hit brick walls, we were left wandering aimlessly while we tried to work out how to make progress.

There’s a reasonably involved story that develops nicely through the game. If anything, they try to tell too involved a story, as at times I was left wondering whether some elements of the room made sense within that world in a way that I might just have glossed over elsewhere.

The story is reflected in the puzzles, where they’ve really pushed to make them not just use the theme but actually fit with, and even add to, the narrative. A couple of puzzles did feel like they’d been forced into the game, but the vast majority felt like natural steps. When they managed that, as in the case of the opening challenge in the room, it was impressive.

The puzzles veered towards being merely instructional at times – not requiring you to solve them so much as work out what you were meant to do and then follow through a set of instructions. Personally, I found that part of the game less fun, although one could argue that it adds more realism. Following instructions may be dull, but it’s likely a more realistic representation of what breaking into a bank would be like.

Hitting a tech failure during a bank heist is probably also realistic and, in our case, that was unfortunately also replicated in the room. This game has a cool piece of tech with some very strict instructions. Sadly, a minor failure meant that those instructions didn’t work. We struggled for a while trying lots of other solutions before the GM intervened. Tech failures occasionally happen, but it was clear from the way he handled it that this wasn’t an unusual occurrence, which is particularly frustrating because it means he could have jumped in more quickly. I’ve mentioned in the past that Escapologic have avoided a lot of automation in their rooms, and I guess that comment came back to bite me when we finally played a room with the opposite approach.

And so we came to the end of the game and our escape. The room was a roller coaster of an experience and, by the time we were reaching the finale, the combination of audio track and the series of challenges had really got our adrenaline up. I’d heard rumours that the final challenge was incredibly frustrating, but it turns out that they’d listened to people’s feedback and replaced it. Unfortunately, they’d replaced it with what seemed to me a terrible puzzle combining maths, lots of reading and another element that I disliked intensely to create an ending that, at least for us, just wasn’t fun. I could see where they were aiming, but I think they abjectly failed to deliver what they wanted and instead made my final experience in Heistakes one of total frustration.

We failed to escape, getting to the finale puzzle with a few minutes remaining but not managing to complete it in time. That was doubly frustrating in light of the earlier tech issue.

Heistakes had plenty of impressive moments – cool centrepieces, fun puzzles and an interesting storyline – but all that was tempered by a frustrating finale, a minor mis-set and failing tech. I’ve got a feeling they’ll end up reworking that finale, and the other elements are obviously the luck of the draw, so I still think it’s well worth taking a punt and playing.

The game’s pretty linear, so I’m torn about player numbers. Two people meant we got fully involved in all the action, but you really want a third mind to push you through things a bit faster; otherwise, you risk not getting out at all. I’d probably suggest enthusiasts go with a team of four if they want to maximise the chance of escape but three if they want to be as engaged as possible.