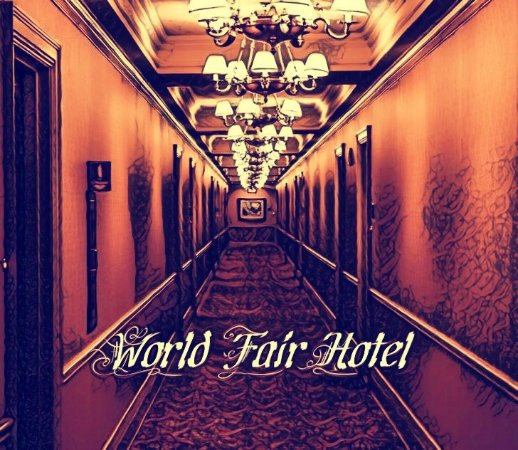 With the advent of budget flights and Eurostar, it’s been a long time since I visited Dover, but the opening of Get Lost Escape Rooms finally gave me a reason to return. Their first game, World Fair Hotel, caught my interest because its subject matter seems perfect fare for escape rooms but hadn’t, to the best of my knowledge, been used on this side of the Atlantic.

The venue is a stone’s throw from the sea, with the castle clearly visible over to the east and the white cliffs just behind. Indeed, the building that houses the rooms used to have a tunnel leading into the cliffs themselves, and you’ll pass by its blocked-off entrance during one of the games. In short, it’s an unusually good venue, not hidden down a back street but instead easy to find and proudly on display.

We had a short briefing in the shop front before heading through the shopyard to the building out the back that houses the games. Along the way, we picked up a suitcase to enter the room. I’ve said it many times, but I love games that get you to carry a prop into the room, and here it’s so utterly fitting – you’re checking into a hotel, so of course you’ll have a case!

Based on a true story in 1890’s Chicago your stay at the charmingly nicknamed ‘Murder Hotel’ isn’t all it seems. Who booked you in to the World Fair Hotel? Why do people who check in rarely check out? And more importantly, what is H.H. Holmes hiding?

Carrying in the suitcase felt like a sign that there’d be a focus on the story and immersion in this game, and we weren’t let down once we arrived in the room. It’s prettily decorated to give a good impression of a hotel from days gone by, and they’ve chosen the props to reinforce that. It’s also a nice introduction to escape rooms because, before you can make any meaningful progress, you have to solve a relatively simple puzzle and perform a fairly thorough search. By the time players move onto the next puzzle, they’ll hopefully have learned what escape rooms are all about.

That sense of story continues through the game, with little snippets being given here and there. If story’s not your thing, then don’t worry too much – you won’t have to read and understand reams of information in order to finish. It’s there to provide a fuller experience, not to make the game harder.

Where this experience really shone, though, was in the sense of exploration. It’s a big game, carefully constructed to give you a real sense not just of a hotel but of getting further and further into H.H. Holmes’ trap.  I didn’t fully appreciate it at the time but, as you move further from the start, there’s a growing sense of isolation that, when coupled with increasingly foreboding sets, really helps to add to the creepiness of the experience. It’s not a scary game, and I don’t recall any jump scares, but it’s a little… uncomfortable at times.

In terms of puzzles, it’s heavily skewed towards searching. For me, too heavily skewed. In particular, they’re bitten a bit by the size of the game because, when you get to the end and realise you’ve missed something, there’s a lot of ground to cover. In the end, we asked for clues on a couple of searches because we realised it just wouldn’t be that much fun to comb through the entire set again.

It isn’t all searching, though: there are some puzzles along the way. While it felt like a padlock-heavy room (perhaps because we were often searching for keys), I think that was probably intended to keep the game on-theme. They certainly had the ability to go higher-tech, with a couple of key moments relying on behind-the-scenes electronics to create nice effects. One in particular managed to combine an enjoyable puzzle, good tech and a fun reveal to add a sense of theatre to the game.

The final puzzle was probably the weakest element of the experience. We didn’t have all the component parts, which left it a little confusing and meant we had to perform yet more searching at what should be the most exciting part of the experience. Then, once we’d collected everything, a clue left us with an ambiguous answer. We cleared it up quickly enough, but first and last moments in a game are key. Fortunately, the last thing you do in this experience is escape, and the way that happened made perfect sense.

We escaped in around 50 minutes with around five clues for search fails.

We had fun in World Fair Hotel, exploring the set and following the journey towards our demise. If you want a game with a good story or a great sense of exploration, then this will be right up your alley. For me, there was a bit too much searching and fewer puzzles than I’d like to see, but neither were enough to dent the core enjoyment I felt in the game.

We went with two, and I think that’s what I’d recommend for enthusiasts. It’ll be tough, but it’s a linear game, and having large numbers of enthusiasts will likely result in you often treading on each other’s toes. That said, it’s a fun experience and there is a fair amount of searching so, if you did want a team of three or four, I think it would work out.