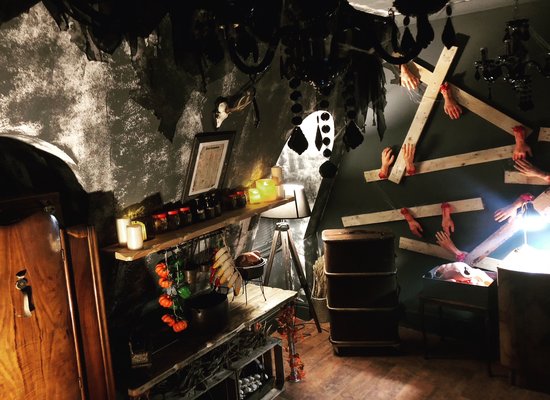 The oldest room still open at Locked in Glasgow, Witch House in Scottish Highlands, is a traditional, creepy witch’s cottage escape room that sees you lost in the Highlands and trying to escape before the resident returns. Before entering the game, you’re given a backpack which helps to reinforce the story. There’s something fun about carrying something into a game. It may just be a small detail, but it starts to build the immersion early and creates a sense of anticipation.

Before we go any further, I’m going to mention one idiosyncrasy of this game: you start off outside the cottage and have to get inside in order to get a key that allows you to escape. It’s not a big deal – I can suspend disbelief – but I’d have loved to have something specific to retrieve from the witch’s house in order to maximise the immersion: a mission, whether it was retrieving an item the witch had stolen or trying to find out something about her.

What starting outside the cottage does allow for is an interesting setting. While it’s not up to the standards of some of their later games, the scene-setting is still an above-average experience, creating an enjoyable environment to explore. And, while the witch theme may sound creepy, there’s nothing remotely scary about this game.

As with several of their rooms, there’s some direction at the beginning to ensure you know what you’re doing, making you less likely to feel lost early on. With a relatively open start, there’s also the opportunity for larger teams to work in parallel, although later stages in the game felt a lot more linear, which is worth bearing in mind when choosing what team size to bring.

What this game has in abundance is flow: the puzzles are on the easy side of the spectrum (or at least that’s what we found!) and, particularly when you get to the later stages, the linearity of the game gives you a fairly clear idea of which direction to head in next. The result of that was that, although there wasn’t a thrilling finale, the feeling of constantly moving forwards delivered enough excitement to ensure we left on a high.

Like all of their games, Witch House is a pretty room with plenty of puzzles to deliver quick wins to teams. It might lack the polish of their later games but it’s still a thoroughly enjoyable experience and a particularly good choice for first-time players.

We played as a two and escaped in half an hour without needing clues. For enthusiasts, I wouldn’t recommend playing as a bigger group, although I still think there’s more than enough here to make it worth playing.