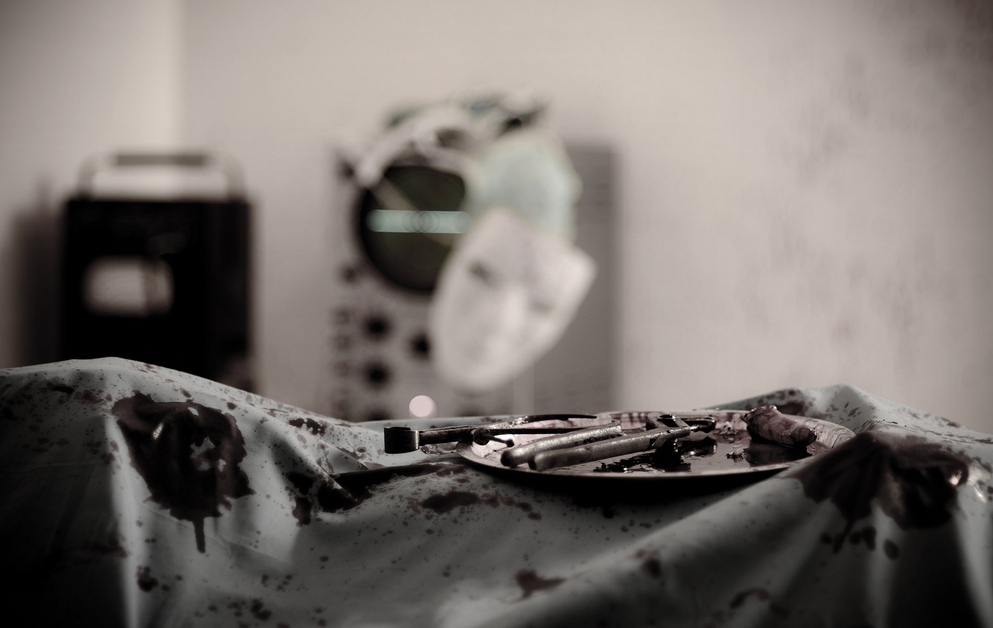 Locked In Glasgow (unrelated to the similarly named company in Edinburgh) has been running for two and a half years but, with visits north of the border few and far between for me, I’d never managed to play one of their games. On this trip, though, I was planning on putting that right by playing all five of their experiences. First up was the Surgery, a serial killer-themed game.

While this is a serial killer game, at first sight, it’s fairly innocuous, with the one exception being that you’re restrained by handcuffs. Looking around the space, you’re greeted by what is basically a fairly normal office scene. In truth, I was a little disappointed in spite of it being well implemented. In retrospect, though, I think they deliberately choose that boring start to provide contrast as the game progresses. Don’t get too comfortable with it because you’ll certainly see a darker side to this game! By the time you leave, it’s pretty clear that they know how to deliver theming through decoration and props.

Puzzles are plentiful in the Surgery. Something I saw in Locked In’s games is that they’re not afraid of putting in a few easy challenges, and I found that created a real sense of flow to the experience. There were lots of small wins to be had although, of course, there were still a few challenges that held us up. One, in particular, was delightfully misdirecting – have faith that there’s a logical solution to every answer and that, when you do solve something, you’ll be confident that you’ve got the right answer. There’s less emphasis on searching than in typical rooms – with the only thing that came close to being a tough search having additional signposting to make it far easier.

I liked the structure of the puzzles in the Surgery, a game that was parallelised for much of the experience but then pinched back a couple of times; once for a key scene in the middle and then again towards the end of the game. That gave us the freedom of exploring the room independently but still felt like we were forced to complete the room and the story as a team.

Tension increases steadily throughout the game as you uncover the story and find more unsettling information. One step along the way adds some theatre to get the adrenaline flowing close to the end of the experience, and that’s then built upon right at the death to bring the game to a thrilling conclusion.

The Surgery is a creepy but not scary experience that delivers great puzzles and plenty of surprises. It starts off reasonably innocuously but won me over with solid puzzles and a few clever touches that really help to deliver a great experience.

We played as a two and had our work cut out to get through everything. I think it’s very doable with that team size, but I’d recommend three players if possible. The parallelisation of puzzles means that, for most of the game, having a team of four would still work well, although there is a short period where things may feel a little crowded.