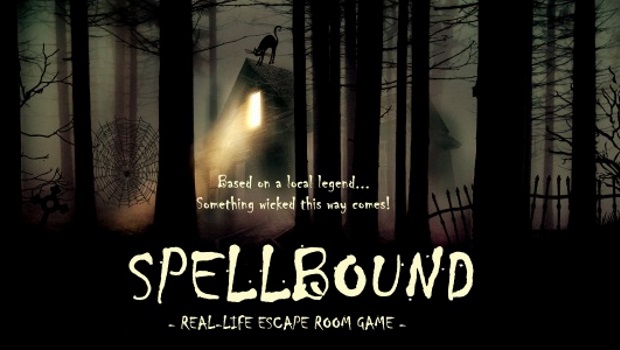 For a long time, I played most of my games in London and NW England, but I’ve been making it a bit of a mission lately to take trips to anywhere else with a game that gets repeated mentions in enthusiast circles. Make Your Escape‘s Spellbound is one such game, but it’s particularly tricky because officially it’s for 4-10 players.

Fortunately, the owners were flexible and, while they don’t generally recommend it, they will make an exception for experienced enthusiasts (I count as one of those, right?) and allow you to play as a pair.  That was great because, try as I might, I hadn’t managed to engineer a visit, and it was pretty much at the top of my must-play list.

After dropping the car at the nearby multistorey (you’re not going to find free street parking nearby unless you go in the evenings), we headed over to their first-floor premises right in the heart of the city. There’s a good-sized waiting area with very separate spaces for the teams. I’m not quite sure what the plan is when they open their new games, Utopia and Dystopia, but I think they’ll be able to make it work.

In the waiting area itself, there’s a nicely printed board on the wall that tells the backstory to the game. For those places that worry that the GMs won’t be able to deliver an immersive briefing, I thought this was a far better option than getting us to read the story from a flimsy piece of laminate. Fortunately, the GM absolutely could deliver the story, with a fluent retelling that was the perfect start to the game.

In the witchcraft trials of 1607, two women were convicted in Derby despite protesting innocence. For centuries, their woodland cabin remained untouched. Now their story continues: one of mystery, deception and magic…and you will become part of the legend.

Work together as a team to solve the puzzles and escape.

Something wicked this way comes…

The introduction isn’t over when you go through the door. Once they’ve got you safely inside, there’s a little bit more audio to give you the final part of the story and set you on your way. In addition, you’re blindfolded to enter the game, a combination that works well: deprived of the sense of sight, hearing becomes your primary sense, and so the audio track really helps immerse you in the game world.

Once that was over, it was time to remove our blindfolds and take in the room. It’s a beautiful space with great decoration and plenty of props. The decoration here is far superior to the majority of escape rooms. It’s not perfect, however – the ceiling in particular grated with me. Usually that wouldn’t be a big deal, but the start of this room sees you split into two groups and then confined in relatively small spaces. If you don’t immediately work out what you’re meant to do, then you’re likely to take a good look round your space, and that will likely include looking at the roof.

The puzzle layout is highly structured, which worked well for our team of two. You’ll know what you’re aiming for soon after you enter the room, and that builds up a delightful sense of anticipation, not to mention a mechanism for tracking your progress. There’s a very linear, very fun start where you have to work as a team to escape your initial incarceration before the game moves into a very open main section with more puzzles on offer than you could shake a stick at. In fact, there’s a real concern that there are too many puzzles on offer here and, with a large team of beginners, particularly ones that have perhaps headed to a pub before arriving… well, it might go badly! As an experienced team, we still found it a little intimidating although with their standard minimum of four it would have been just fine.

Alongside that opening puzzle were lots of other good puzzles with plenty of variety – pushing us to our limits but almost always feeling logical.  There were still a couple that I considered rough around the edges, however. One idea, which I’d barely class as a puzzle, was used twice for no apparent reason. Another challenge involved a confusing directional puzzle with an aspect that felt a bit like a red herring. Twice in this game (once there and once elsewhere) we came unstuck because we’d come up with what looked like the “right” solution and then spent a lot of time inputting codes into padlocks only to find we were barking up the wrong tree.

It’s not a game where the story develops hugely through the experiences. There’s the extended introduction and a wrap-up once you’ve completed it, but they barely brush on it in between. What they do have are moments of theatre within the story, which worked particularly well in the finale to help reinforce the theme while bringing the team together in one final act before escaping.

We escaped in 57 minutes having taken three clues. We were offered clues on request but opted to let the GM be the judge of whether we needed them instead. Our GM played that pretty well, holding off clues until we were well over halfway through.

This is a fun game, with pretty decorations and good puzzles. I can’t imagine what it would be like with the full ten people but, for the two of us, it was most definitely a rewarding experience and well worth the trip over to Derby.

This is doable with two people, but I’d recommend at least three enthusiasts if you can manage it, and ideally four if you want to save yourself some stress. Beginners should probably take along more, but I think it would be (fun!) pandemonium if you took the full ten, so I’d suggest sticking to around six at the most.