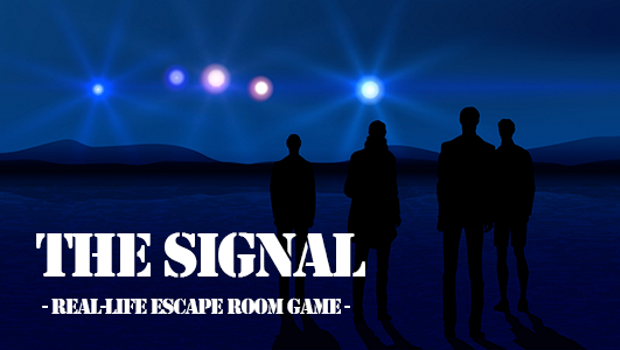 In some sense, we played Make Your Escape‘s games the wrong way round, with their newer, bigger game as our first experience before moving on to their original offering. There are separate waiting areas for The Signal and the ten-player Spellbound, which is good because, with that many people hanging around, a two-player team could easily get overwhelmed!

Where the previous game had involved an in-depth introduction, this was far lighter, with us being kept somewhat in the dark so that we could uncover the full details inside the room. The one thing they did make clear was that, at some point, we’d have to make a choice about which path to take and that, once taken, it was irreversible. Intriguing…

Following reports of strange lights in the skies over Derbyshire, your team intercepts a distress signal, which leads you to an abandoned military bunker. Once the door closes behind you, you quickly realise the signal was not all that it seemed, the bunker was not abandoned and you are not alone.

The truth is in there….

As you walk into the room, you’d be forgiven for feeling a little disappointed with what greets you. In essence, it’s a pretty dull office with just a hint of military theming that I certainly wouldn’t describe as immersive. Rest assured that there’s more here than meets the eye. Where Spellbound had been all-encompassing and consistently charming, this was pretty bare in most places but included a couple of more showstopping moments. The design team also deserve kudos for a humorous reference to aliens that also gave a pretty cool user experience in the room.

You’re thrown into the space with barely a hint of a story, and you slowly piece things together during the game. Fortunately by the end you should have a pretty good feeling of what’s going on. This is very much a game that develops throughout, and I’d strongly encourage you to take the time to read all the material they give you. There’s plenty of time, so you might as well make use of it.

On the puzzle front, things were a little weaker. Most of them, while not always exciting, were perfectly logical, but a couple of the solutions left me feeling disappointed. A while back, Mark from Really Fun talked about elegant solutions to puzzles, and that really chimed when I played this game. There was one solution that we ended up ignoring because it just didn’t feel “right”. Another puzzle solution seemed flawed – they’d very much pointed at one kind of solution, and we battled our way against it to find that the right one was far more straightforward but seemed inelegant.

The game proceeds in a linear fashion right through until the finale, which is when this game really comes alive. As well as making a decision about which ending to take, there’s a pretty cool mechanic to make that decision and a nice set of steps to get there. Having two distinct endings obviously makes it an unusual game. You shouldn’t think of them as pass/fail – escape is possible either way, but I’ll leave you to guess at any more detail than that. We got the chance to see what the alternative ending would have been like and, while the two games aren’t vastly different, it’s an interesting twist that might see some players (especially those with a bit of time left on the clock or bigger teams) having a deep discussion about which way to go.

We finished in about 50 minutes, taking three clues which were delivered over a screen.

This was a fun game once it got going, with an interesting twist and a couple of real highlights. However, if you do play, prepare yourself for some more basic puzzles through the game.

I’m torn about what team size to recommend. The linear nature of this game lends itself to smaller teams, while the decision-making is probably most fun in a larger group where you might have dissenting opinions. Plus, one of the puzzles might be quite fun (albeit cosy) with a medium-sized team of four people. It’s not clear cut, but I’d probably recommend the smaller team size for enthusiasts because, otherwise, they’ll spend a fair chunk of the game feeling sidelined.