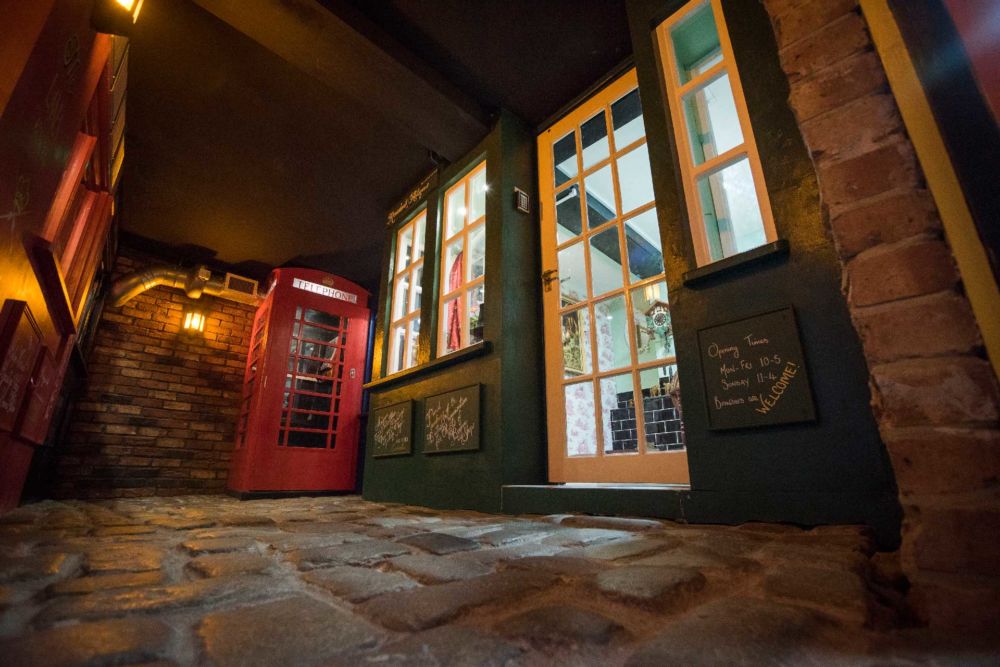 With the addition of Loot the Lanes, Pier Pressure is now the biggest venue in Brighton, with a total of four games. They’ve carved out a niche in this affluent market by creating games centred around local culture, with previous experiences making use of the Brighton Pavilion and the Mods’ history in the city for inspiration. It’s perhaps no surprise that “the Lanes” in the title of this story doesn’t refer to lanes in a bowling alley sense as I’d originally thought (yes, in retrospect that is ridiculous) but, instead, to the old heart of Brighton where a series of lanes interconnect to make a higgledy-piggledy shopping area.

I’d had the good fortune of wandering around the real Lanes a short while before playing the game, and I’d encourage you to do the same. It’s not going to help you solve the puzzles, but this experience really is a homage to its inspiration, and knowing a little about the look and feel will definitely help you appreciate the game more.

While you head to the usual Pier Pressure reception for this experience, it’s worth bearing in mind that the game itself is located in separate premises a short distance along the street. Not a big deal on the sunny day when we visited, but worth being aware of on a colder day before you shed all your winter coats or put away your umbrellas.

First impressions on walking into the game were stunning. Even as someone who’d only briefly visited the Lanes, I could see how much effort they’d put into recreating their vibe. They’d taken full advantage of the pre-existing features of the space and augmented them to create something that really could have been a part of those twisting passages in the Lanes. For people who know Brighton well, there are a few more subtle references that I think will leave them utterly captivated.

One of the first things you’ll notice about the game is what turns out to be the clue system. I love it when companies embed their hint mechanism in the game world, and this is a prime example of that. They’ve broken immersion very slightly in the way the clues are delivered, but I think that’s a good decision because it means that help is available to everyone in the room rather than just one player at a time.

A significant part of my enjoyment came from a sense of discovery and anticipation. From the moment the timer starts ticking, you can see pretty much everything you’re going to interact with, and much of the challenge is to find the way to reach things. It felt almost as if the game was teasing me from the moment we walked through the door, showing me all the fun things to come but daring me to solve a bunch of other puzzles before I got to play with them.

There were plenty of puzzles on offer, although I think large teams (the game allows up to nine) may find it’s not quite enough to satisfy them. With six of us in our team, I found that, every time we unlocked something, there were several people looking on to see what might be revealed. While the game’s not linear, it didn’t feel like it was quite open enough to occupy such a large group.

In terms of puzzle content, I was pleased with the variety on offer both in the style of challenge and in the way it was implemented. As usual, my favourite parts came in the moments of teamwork, of which there were several in the game. One was an interesting variant on a fairly standard challenge, while another involved the team getting up to a little bit of silliness that on the face of it was pretty simple but which required good communication on multiple levels.

That wasn’t the only example of silliness, with a couple of other humorous moments in the game bringing a smile to my face. In fact, that began outside the room with the walk from the reception and the introduction. In each, we could see from the start that they were keen for this to be a light-hearted affair, something that continued through the puzzles and, in particular, with the clue system.

Pier Pressure deliver more moments of theatre in this game than in their previous offerings, with two standing out in particular: one because they’ve used a cool puzzle solution to create a novel delivery for a new clue, and another because they’ve taken a simple puzzle solution and intertwined it into a ridiculously big piece of equipment purely to help convey the sense of being in a heist.

There’s a clear sub-mission through the game that you’re given before you start, and with that comes a sense of progress to the experience. Too often, games finish either with a moment of theatre that is missed by half the team or with a question over whether the game is really over. There’s no such issue here. It’s clear when you reach your finale, so you know you should gather your team round for the final reveal.

In spite of playing in a larger-than-usual team of six, I thoroughly enjoyed my time in Loot the Lanes. It’s a beautiful room that’s a joy to spend time in. The puzzles are well presented, and there are moments of theatre at several points, with a clear finale that makes the game end on a high.

We played as a six, which felt a little too full, but it certainly wasn’t ridiculous. I’d suggest enthusiasts keep to the lower player limit if they want maximum enjoyment – I don’t think you’ll have any problem finishing all the puzzles.