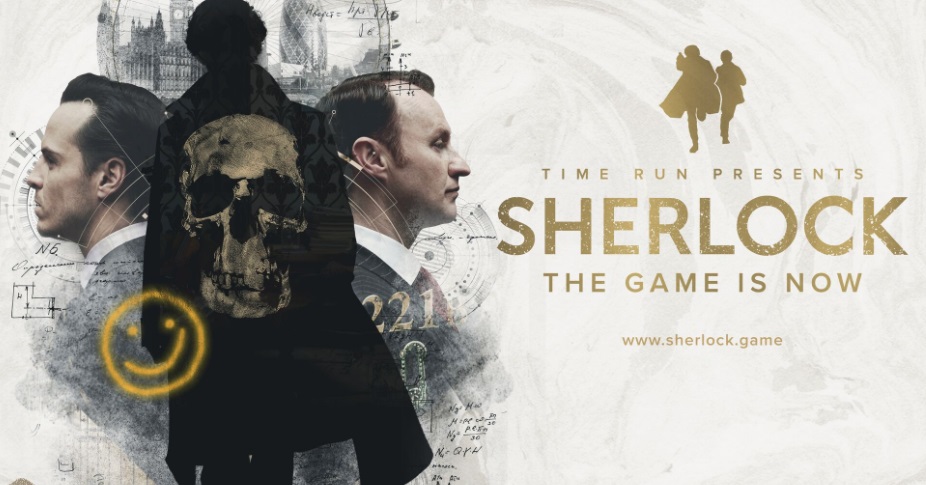 [This review was written pre-pandemic, based on a visit in Feb 2020, but sat in my drafts folder until now because I didn’t feel comfortable encouraging people to play]

Few games have been as eagerly anticipated as Sherlock: The Game is Now, but it’s fair to say that, like many escape rooms, it had a few teething issues after it opened. That delayed my visit but, after leaving plenty of time for it to bed in, I headed along to see whether it was worth the wait.

As you’d expect given the pedigree of this experience, there’s an unusual start to the game. The email tells you to present yourself at an optician’s at the specified time, from where you descend into the game world. To be honest, I was sorely disappointed by that start. Yes, it was an immersive introduction, but it wasn’t… exciting. Those first few minutes really did feel like admin to me, which was completely different from the energetic start that you would see at Time Run, the company from which, in effect, this experience was born. Things improved as the introduction progressed, but the pre-game section never really captured my imagination as those earlier Time Run experiences had.

The meat of your time, though, is a conventional, one-hour escape room that sees you investigating a Sherlockian mystery. With the game being set in the contemporary world, there weren’t the flights of fancy that we saw in Time Run, but there was still good theming throughout, at times focusing on immersing you in their world, while at other times aiming for something more visually striking. This isn’t a set that you’re likely to go home raving about, but it worked well to transport us to their adventure.

Alongside that, The Game is Now delivers a story, complete with cameos from key members of the TV series. That was important for me because, while the sets certainly lived inside the Sherlock world, they didn’t link to it in the way that the actors could. I have to admit that I didn’t follow along with all the story – in part, I think, because I missed certain puzzles early in the game – but there was always a clear short-term goal at each stage, which meant that my failure to fully absorb the story didn’t have any significant impact on my enjoyment of the experience.

The puzzles were the highlight for me, and I found the way they were structured of particular interest. There were parts where they’d clearly parallelised the challenges in a way that encouraged our team to divide and conquer. Elsewhere, it felt like it was designed to work together far more closely (although there was almost always something to be parallelised), and some puzzles were clearly designed to actively engage multiple people simultaneously. That structure meant that our team was continually breaking apart and reforming, allowing everyone to spend time working with other members of the group and deliver a true team experience.

Near the start, things tended towards relatively simple challenges that we quickly overcame. Later, it felt like there was a real emphasis on observation before transitioning to more complex challenges near the end. Late on, there were a couple of what I’d describe as more mathsy puzzles that I think could put off some teams. We eventually overcame them, but be warned that you could be hitting some taxing problems late in your game.

Those meatier challenges really appealed to me, with the combination of physicality and mental activity really working to engage me in the end sequence. In fact, the finale was by far my favourite part of the experience, with the layout of the game helping to get the team rushing around in a way that reminded me a little of Time Run’s Celestial Chain. The parallelisation was such that the whole team were kept busy till the last couple of puzzles, leaving some team members feeling like they had to stand back and watch rather than being actively involved.

As you’d expect, the end sequence wasn’t just a case of solving a puzzle and opening an exit door back to the reception area but instead provided a theatrical ending alongside some closure for the story.

The Game is Now is a very good, well-decorated experience with an enjoyable mission and some good puzzles. The introduction didn’t live up to my expectations, but the game itself still delivers one of the best experiences in London. Although there were a few puzzles that took the edge off the experience, this would still be one of my top recommendations in the capital, assuming you’re happy with the price.

Our team of four escaped in 46 minutes without taking any clues. For enthusiasts, I’d recommend teams of four players, although you may find yourselves stepping on each other’s toes in one or two places.