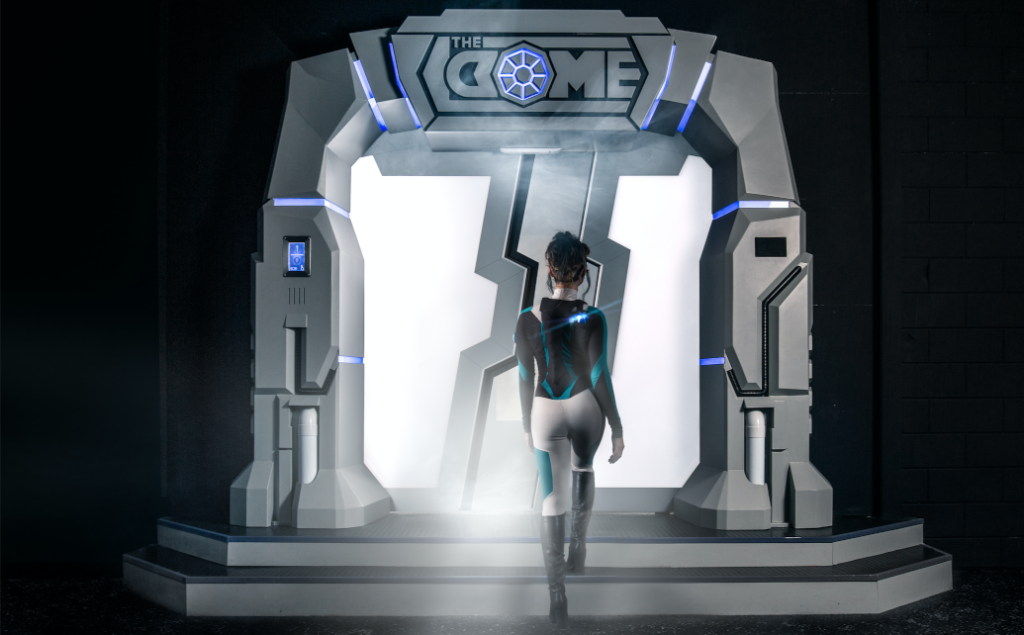 In 2019 this game from Escape Room Nederland was voted the best game in the world by escape room enthusiasts. That kind of title always worries me, because it means players go in with high expectations and end up focusing on the ways in which it fails to deliver rather than revelling in all the things that go well. So it was with some trepidation that I turned up at their venue. Could they possibly live up to their “best game in the world” billing? Only time would tell.

It’s a beautiful venue with an interesting entrance and then a large waiting area packed with games to keep you entertained while you wait to play. And all the time, the entrance (yes – that really is the entrance above) is sitting there teasing you. When a company takes that much trouble over just the door into their experience, then you can be pretty confident that the set will be impressive.

And it is. This game looks absolutely gorgeous. Everything about it says quality, and Escape Room Nederland show that they can create beauty at both the macro and micro scales. Each space you walk into is impressive in itself, while the combination of them is simply stunning. Those first glimpses of each new room are a real treat, but what particularly impressed me is that the same is true when you’re working on individual puzzles, including one that felt like it was a piece of art as much as it was an escape room prop.

When a company puts so much effort into looks, they rarely deliver to the same level on puzzles. So how was the Dome on that front? Well, put it this way: that pretty puzzle I mentioned above was, I think, the single most enjoyable puzzle I have ever played in an escape room. It had several aha moments and teamwork galore, and it was perfectly integrated into the room.  That wasn’t a one-off either. The standard of puzzles was high throughout, with meaty challenges raining down from start to finish, all of them logical and most of them encouraging (and sometimes relying on) teamwork. If there’s one potential negative to the cerebral side of the game, it’s that a couple of puzzles require a little skill. Having said that, neither of them troubled us, and I wouldn’t expect them to pose a significant challenge to many teams.

The biggest weakness from my point of view was the storyline. I never really followed the detailed plot. I understood the idea behind the majority of the game, but why all that mattered didn’t really sink in. Instead, I focused on the feeling of adventure. Each new space and each new puzzle felt sufficiently exciting to engage me without needing to have that overarching story firmly imprinted in my brain. The time flew by, and I was easily sucked into the gameplay.

So engrossed was I that I had no idea when the end of the game would come – I couldn’t tell if I’d been in for ten minutes or two hours. Fortunately, there’s a very clear moment when you realise that you’ve entered the endgame. Unsurprisingly given what’s come before, it’s presented theatrically and with a clever final puzzle that integrates nicely into the story to provide a sense of closure to the whole experience.

In case it’s not absolutely obvious, our team of four absolutely adored this game. Without a doubt, this is the best game I’ve played. It has a set that is staggering with a real sense of exploration, great puzzles and an overall experience that is jaw-dropping. We went in with high expectations, and this easily exceeded them.

Go to the Netherlands. Play this game. You won’t regret it.