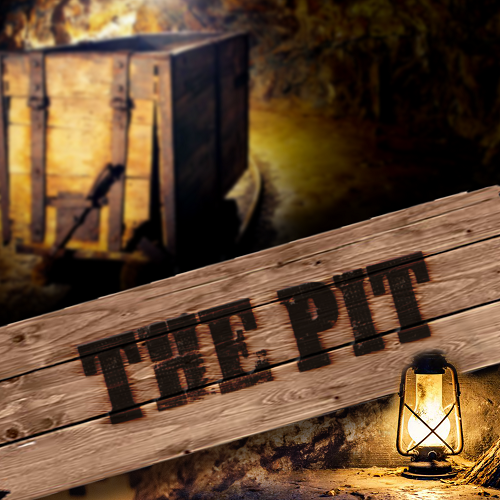 The Escapement don’t do things by half. When they created Pirates of Polaris, they cut up a ship to make it feel authentic. When they created Exodus, they put tonnes of effort into making sure you were transported to Egypt. I was excited to see what they’d done with the Pit – had they actually excavated deep down into Margate to give an authentic experience? I wouldn’t put it past them.

The introduction to the Pit is legendary, and it lived up to its billing with something that’s pretty rare to see at escape rooms: a briefing that truly tries to embed you in the game world. They’ve created a small space that felt like it might really be where miners waited before descending into the bowels of the earth, complete with hard hats hanging on the wall ready for your journey. The GM introduction really stepped things up, telling a complex story of corporate greed and unfortunate happenings that led us to the mission ahead.

The Pit is a drop-dead gorgeous game. I joked that they might have dug down into Margate to create the space, but this really did feel like we were deep underground. Every piece of decoration in the game was geared towards taking us away from the real world and depositing us in their subterranean experience. There was a wonderful, chunky, industrial feel to the space, with tactile interactions that felt right for the game environment. Add to that background audio that continually ramped up the tension as we moved forward, and they’d utterly delivered on that side of the game.

A game set within a mine is one where a sense of exploration is particularly important. You want to feel cut off from the outside world and experience the panic of being lost underground. This room delivered that in abundance, making us feel like we’d thoroughly lost our connection with the outside world through a variety of means. When we were approaching the end of the game, I couldn’t help but feel like it was a very, very long way back to safety. That wasn’t because it was a massive space for us to explore but because of how they’d laid the game out.

The puzzle side of things is the one place where I felt a little let down by the Pit. That’s not to say they were bad – they did much that was very good. Firstly, almost all the puzzles felt like they fitted within the experience: they rarely felt layered on top of the game and instead felt like an intrinsic part of the world they’d created. Secondly, they all made logical sense: whenever we worked out the solution to a puzzle, I was confident that what we were doing was the right thing. And there was variety: physical interactions, logic, observation and communication challenges all made appearances, and I was pleased with the way they’d balanced the game.

The weak part was in the complexity of some of the challenges. Three of the puzzles went past the point of being fun and felt more like work. Having had my “aha” moment and a little time afterwards to revel in performing the right actions to solve the puzzle, I then found I had to go through a repetitive process to finish off the task. It’s not clear to me how much playing as a pair affected that. At least one of those puzzles would have been a lot more fun in a larger group, but there was one that was very much a single-player challenge, and I suspect most teams solve it through luck (or GM involvement) rather than skill.

I said that this game immerses you in their world and makes you feel like you are far removed from reality, and no more so was that true than in the finale. There’s an extended ending to this game which was delightfully theatrical, physical and chaotic. It was loud, it was intense, and it ensured we were racing out of the game as fast as our legs could carry us. It was the ending that this immersive adventure deserved.

The Pit is a truly impressive game, immersing you (or should that be interring you?) in the world they’ve created. It’s a visually astounding set backed up by a cool story concept. For me, the puzzles were the weak part of the game and just took the edge off what would otherwise have been a stunning experience.

After a slow start, we escaped the room with around three minutes to go. This is a game I’d recommend for a larger group – at least three or four players. That’s not because I think it was super hard (I think most enthusiasts will go much faster than us) but because a couple of the puzzles will be more fun in a large team.