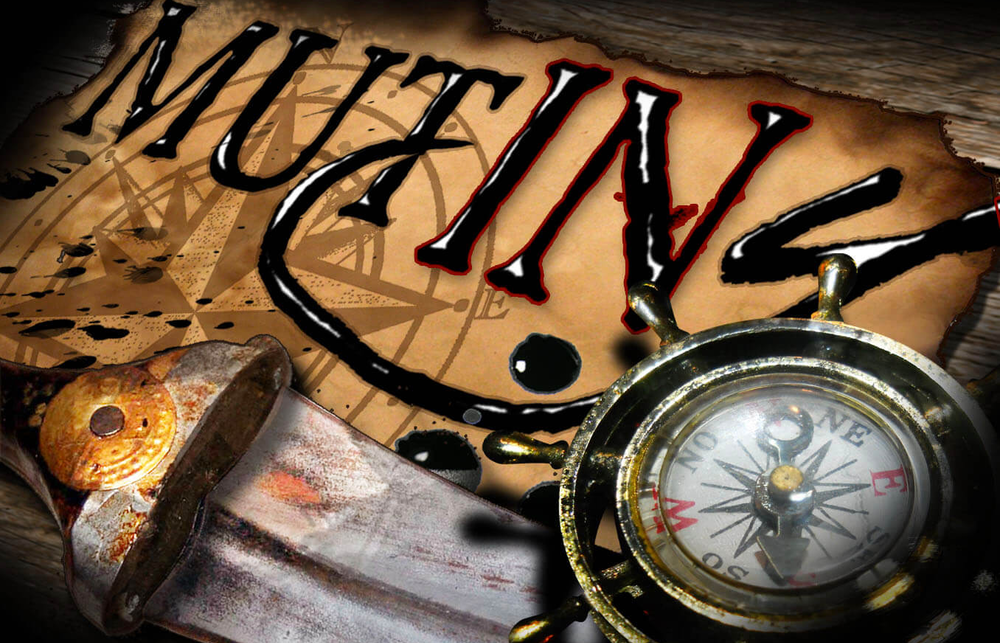 We’d been impressed by our first game at Tulleys Escape so, after a short break in the café to let them reset, it was back in to see what round two held in store. Not knowing anything else, I’d generally expect a pirate game to work out pretty well – wood and rope are great additions to the theme, and puzzles seem to fit more naturally into the experience. What would this game look like?

It’s the year of our lord 1672, and you be right in the height o’ the golden age o’ piracy… After years of sailin’ the high seas, you and your crew have succeeded your fair share of ambushes, and as a result – your ship is teamin’ with bounty. Yet you’re still suffering beneath the cruel wrath o’ Captain Starling – a notoriously bloodthirsty buccaneer, and your shipmates have decided you all shall take matters into your own hands. After all… you fought for the gold, so the gold is yours for the taking, aye?

Once the old seadog has retreated to his berth for the night, you make your move. Get in, get the treasure and get out. You won’t have long before he starts to stir – and Starling shows no mercy to ANY soul…

As soon as I walked through the door, I was confident that this was going to be another good room. If anything, the attention to detail here was even better than in our first game, with a gorgeous set that really captured that pirate vibe. They’d done a great job of giving players a sense of exploration with a game that kept providing great reveals. One in particular will wow enthusiasts and novices alike, and I was impressed to see that they’d not just settled for a basic pirate theme but gone beyond that.

After you’ve taken in that initial prettiness, though, it’s down to business with some introductory solves to get beginners into the swing of escape rooms. Be warned that this game has a strong search element and you’ll need to use all your wits if you want to find every hidden item. The puzzles quickly become a little more challenging, and I was pleased to see that they’d thrown in some serious physical puzzles to enhance the game – something that I felt was a little lacking in the Outfitters.

There was a series of big, stand-out puzzles some of which required – or at least were significantly helped by having – two people. If you’re looking for some challenges with a skill element, I think you’ll be happy here. Equally, if you like bigger, chunkier interactions, then a few of the elements in this game will be right up your street.

In between those big puzzles was a good set of smaller, simpler puzzles. They weren’t earth-shattering – generally we saw the answers pretty quickly – but they gave us a series of small wins to keep the momentum up for those bigger puzzles and made it easier to deal with the slower searching phases.

While the game didn’t give you an amazingly clear sense of progress, there were a couple of sets of items that hinted about how much of the game might be left. These items eventually came together in a slightly confusing puzzle that we’d been contemplating almost since we’d entered the room. It seemed like there should be a fairly simple solution here but, try as we might, we couldn’t get it to work, and the other solutions we produced were unsuccessful. Eventually we resorted to a clue, but it quickly became apparent that the puzzle was slightly broken – something that, as it turned out, our sister team had also experienced. Granted, it was a hard-to-spot break but, given that both teams struggled in the same place, I think they should have been a bit more proactive in investigating what the issue was.

Aside from that minor hiccough, the game flowed reasonably smoothly, with just a couple of friction points where we got stuck due to fairly tough searches. Before we knew it, we were on to the end game, and this time the mission had some nice closure just before we rushed out of the ship.

We escaped in 41 minutes with a single clue for the slightly broken puzzle.

In case you were in any doubt, the strong showing in the Outfitters was no fluke. In terms of quality, there’s not much to choose between the two games. I marginally preferred the Outfitters for its consistency, but this one clearly had the better set pieces and cooler puzzles. Our sister team found the Outfitters more painful and said this was their preferred game. As I said – it’s pretty close.

Again, I think three or four is a reasonable number of enthusiasts for this game. Beginners can take more and, even if you’re not always able to get involved in the puzzles, you can still appreciate the beautiful set but I definitely wouldn’t go to the full eight people.