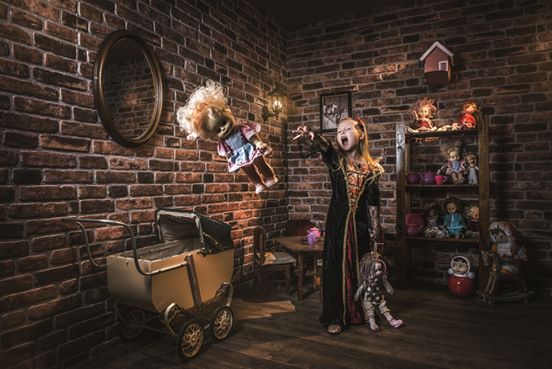 photo of Phobia’s The Departed

As part of our weekend in Paris, we played a couple of the recommended “scary” rooms in the city: Phobia‘s Les Disparus (The Departed) and You Have Sixty Minutes‘ Cannibal of Paris. If you don’t hate scary games, then Les Disparus is a great choice. It’s a well constructed escape room and, while it has a few rough edges, it’s still a good game with a great finale and is above average even by Claustrophobia’s high standards. (It’s also worth saying that, if you’re in a two-player team, Loft 13 at the same venue is another good option as a scary game.)

Cannibal of Paris is a game I’d only recommend if you actively like scary experiences. If you’re only going along because it’s a highly regarded escape room, I think you’ll be disappointed and, if you dislike scary games, then you won’t enjoy yourself at all. In fact, I’d describe it as primarily a scare attraction. Having said that, IF you like scary experiences and escape rooms, then it has a lot going for it: plenty of theatre, decent puzzles, lots of surprises and a few slightly terrifying moments. It’s worth mentioning that they’ve just launched a sequel, so you can double your horror if you so wish.

Walking into the room, you can see the influence of the Claustrophobia franchise (to which this venue used to belong). As with all their games, they’ve produced an impressive-looking set that quickly immerses you in the game world. Sadly, it’s a dark environment and you only get a couple of relatively dim light sources, so it’s far harder to appreciate their work – not to mention search. This is a shame, because a big part of the work you need to do early in this game is searching. On several occasions, some teammates and I found ourselves sidelined because we didn’t have access to sufficient light, which led to some frustration in the early parts of the experience.

Once we got going, though, not only did our eyes start to adjust to the light, but we also started to understand the puzzle structure, which made it clearer what we should be doing. After that, the puzzles and searching flowed a little more smoothly, allowing us to get into a rhythm of solving. As per usual for the venue, it’s a pretty linear game, which meant that, when things went well, we moved along quickly as a team but one problem could result in us hitting a bottleneck.

Unfortunately, several problems came together. First, there was a logic puzzle. My experience is that they’re generally tedious in escape rooms because they don’t lend themselves well to engaging multiple people and, if you do happen to make a mistake in your calculations, you often don’t find out till you’re almost finished. To make matters worse, this one had some particularly questionable clues because of the lighting and was set up in a way that made it hard for more than a couple of people to get involved. I found myself wandering aimlessly around the room as my teammates slowly worked out an answer. To add insult to injury, I didn’t even have light…

While this isn’t a scary room, it’s most definitely creepy. Interspersed throughout the game are small videos that are likely to freak out players of a nervous disposition. On top of that, there are a couple of jump scares along the way and audio that adds to the overall vibe.

For me, this game reaches a truly great finale as you find out the story of the room and hit one last challenge before you can resolve the mystery of the Departed.

I’ve deliberately not given a star rating to Cannibal of Paris because it’s so dependent on the player. Scare fans will love the experience, while I think others will appreciate it to differing degrees but will find it disappointing as a pure escape room.

From the moment you cross the threshold, you move into the Cannibal’s world. It doesn’t hit maximum scariness straight away, but it rises quickly, and it really isn’t very long before you encounter the extremes of the game. Everything about the place is horror, but there’s plenty of variety to that experience. At times it’s bleak, at times it’s unpleasant, and at times there’s merely an occult tinge to proceedings. That worked well for me – by mixing up the environments, they ensured that I didn’t get too used to what was in front of me. In particular, spending my entire time in a non-descript bleak environment, while perhaps authentic, would have been unpleasant.

Fear is a big part of this experience but, in spite of the effect that has on cognitive ability, the game opens with some fun puzzles including an evil variant on an escape room trope that I appreciated. There’s a fair chunk of searching to be had throughout your time in the room, and you’ll need to examine every corner of the space if you want to get past all the puzzles. The challenges were a little less exciting from a puzzle point of view as the game progressed, with some pretty standard fare, but the vast majority were fair. We hit one technical issue that they worked around admirably once they’d realised what had gone wrong, although we did get frustrated while waiting for them to step in with that help. That can be forgiven to some extent given that it’s undoubtedly a rare issue and we were obviously speaking English to each other so it was harder than usual to pick up on the problem.

Unsurprisingly, the theatre of the experience doesn’t stop at the intro but makes an appearance at various other points in the game. You’re not going to be terrorised throughout, but there’s more than enough to ensure you’re pretty much always on edge. That was particularly true at the finale, where it felt to me like a far more traditional ending than I’d expected – less adrenaline and more thinking. Of course, as with much of this game, how you feel about that is very much a personal matter.

That’s all on Phobia and You Have Sixty Minutes – want to read more about other local games? A link will be added here when the summary article is published at the end.