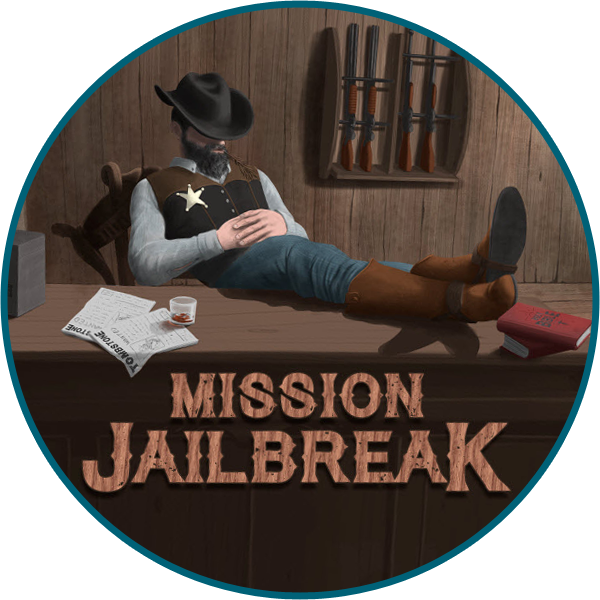 On a previous visit to the Austrian capital, a couple of the Time Busters games were among my favourites, so I was keen to try out their most recent addition, Western Jailbreak. Joining me in the room would be local escape room enthusiasts from Crime Runners and Fox in a Box so, whatever happened, it promised to be a fun experience. Before entering the game, they play you a video intro. Usually, I find they aren’t that great, but I was pleased to see that this felt like a real story and, even better, some elements of it were echoed in the room itself (but don’t worry: you don’t need to remember any of it).

The interior of the game is an old-fashioned jail set that really delivers on the western theme. “Prison break” is a pretty common genre, but Western Jailbreak shows that, by mixing it with a secondary theme, you can create a compelling experience that stands out against its competition. It’s more than just the mixed theme, though. This prison break is much more interesting from a visual point of view, and the sense of exploration really adds to the experience. The one rough point on that side of things was that some of the set (which only part of the team will see, and not for long), wasn’t fully completed, which broke the immersion slightly. Not horrendous, but it brought down the enjoyment of a part of the game that should have been one of its highlights.

The central mission to the game is retrieving a map that’s hidden in the sheriff’s office. Reading the website, there’s a complex story behind this map and why it ended up in the jail but, in truth, it’s just a MacGuffin, and it plays relatively little part in the game itself. That didn’t spoil the experience though. The MacGuffin provided a clear mission to the game and, from a fair distance out, I had a strong feeling about where we’d find the map and so had an idea of our progress in the experience.

The puzzles made great use of the theme to create fun challenges that felt like they generally belonged in this specific game. There are plenty of physical interactions in the experience but also some more cerebral puzzles. These could be solved in parallel, which allowed our team to split up effectively and solve puzzles independently. Even better, there was plenty of variety, which gave each person scope to gravitate towards the challenges that they would enjoy more/be good at. Across the whole room, not one puzzle frustrated me, which is rare indeed. Something that did surprise me, and that may frustrate other players, was a couple of word puzzles that seemed to only be available in English. It’s hard enough solving linguistic challenges in your mother tongue…

One word of warning: there’s a final puzzle that the room clearly builds up to that’s a little tricky. It’s good fun and perfectly logical, but it may be a bit frustrating if you’re short of time. As it was, it gave us a satisfying final challenge and provided a fitting end to a fun experience.

All in all, Western Jailbreak is a pretty game with lots of good puzzles. It’s not trying to blow the genre out of the water, but what it delivers, it delivers well and with style. If you’re in Vienna, it should be on your playlist.

Our team of four escaped in 45 minutes without a clue (although we came very, very close to asking for one!). That seemed a good size for the game – it would be tough with just two people, and it might get crowded at times if there were more of you.

That’s all on Time Busters – want to read more about Vienna’s games? Click here to head back to the main Vienna page.