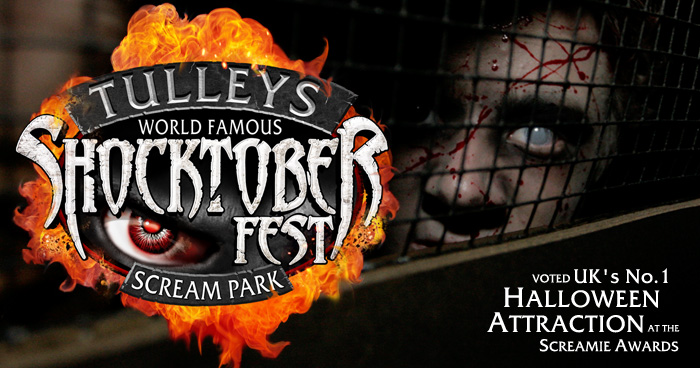 Before I jump into the review, I should make something clear: I don’t find the idea of being scared particularly interesting. I’ve played plenty of escape rooms that feature scares, and I can never really believe in them enough for it to affect me. I can certainly get jumpy – wondering what lies around the next corner and flinching when something appears unexpectedly – but, beyond that, my adrenaline levels don’t change much, and I usually find the scare stuff is getting in the way of the fun rather than adding to it. Yes, there are some exceptions (Poltergeist in Prague for one!), but they are few and far between.

In spite of all that, Shocktoberfest is an experience that I thoroughly enjoyed. Enough that I’ve now been along twice. Which leaves me asking myself the question, “Why?”.

Well, I think it comes back to one of the key parts of escape rooms – that feeling that you’re in an environment that’s entirely separate from the real world. More importantly, they don’t just go for cheap scares. Yes, there are plenty of jumps along the way, but there are also moments where you interact with actors on a much more personal level. It’s not clear to me how much of the experience is choreographed in detail and how much is free form, but I suspect that there’s quite a lot of freedom granted to the performers, and you can see that some of them are thoroughly enjoying their roles.

Sometimes, they’re just there to scare you, but my favourite moments are generally when I’ve lost contact with my friends – either plunging ahead or falling behind – and one of the actors decides to play with me for a few moments. If you think you can survive alone, I highly recommend taking that approach for some of the mazes. Yes, mazes, but worry not: they’re only mazes in the sense that they twist back and forth. There’s almost always just a single route through from start to finish (for you – the actors have other rat runs they can make use of to allow them to appear as if from nowhere…).

The other question in my mind before I went along was how could they deliver ten separate scare attractions (not to mention various pieces of street theatre) without getting repetitive. Truthfully, there are moments where you’ll find similarities between two of the mazes that takes the edge off a little, but the vast majority of them are very distinct. Coven, for example, had a fantastic start where you interacted with water witches and then a delightful ending that saw you wandering around in the open air with fires burning all around. Twisted Clowns was a surreal 3D experience where they messed with your sense of perspective throughout. The Cellar was an oppressive environment that gave a real feeling of claustrophobia. Vixi took away your sense of sight and allowed your imagination to run wild. Penitentiary saw you walking through a prison with lighting effects that, well, it’s hard to describe how well they worked without actually being there. The Hayride saw you heading out on a tractor ride to take in, up close and personal, a variety of film-themed scenes.

Some experiences were better than others (I loved Penitentiary, Clowns and Coven in particular) but I enjoyed all but one: Circus of Horrors. It purported to blend horror and burlesque, but it just didn’t work for me. Perhaps I’m overly squeamish, but the bits that were impressive felt like normal variety acts, and the bits that were scary I just found a bit too unpleasant.

It’s not just about the scare mazes, though: there’s plenty more going on. Fireworks on the last night, street theatre throughout and, new this year I think, a fun show that took place every hour. There’s plenty of food to be had, and even a bar for the adults.  In fact, the whole place has a carnival feel to it, and just wandering around (on a dry night at least) was fun – soaking up the joyful atmosphere (and drinking a hot chocolate to keep warm!).

So, am I a fan of scare attractions now? Well, no, but I most certainly am of Shocktoberfest. Why not give it a go next October (tickets are already on sale!) and see if you are too?