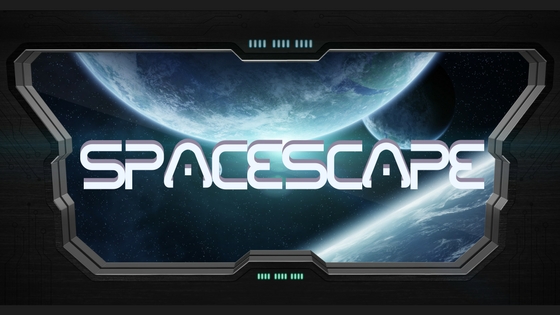 Having thoroughly enjoyed CTRL ALT ESC‘s Frankenstein-themed game earlier in the year, I was excited about returning to play their latest offering, Spacescape. It’s a great little venue, right down on the seafront with a cosy feel. Even better, the designers are clearly enthusiasts with a focus on creating longer games which are less about the pressures of escaping and more about the adventure along the way.

You and your crew are on a voyage to a newly discovered planet, but now the spaceship’s lights are flashing and alarms are sounding. Surely you can just turn off the warnings and forget about it, or maybe you need to prepare the escape pod…

WHAT COULD POSSIBLY GO WRONG?

If I built a space-themed escape room, this is how I would make it start. It’s a simple idea, but it sets the whole game off on the right foot, throwing you straight into the immersive deep end. The opening puzzle may be on the tricky side for first-timers but, even if they need help, it shouldn’t hold them up for long. There’s a sense of confinement in that opening segment that means that, when you do progress, you appreciate the space on offer. In fact, this game is all about its use of space (no pun intended) to reinforce the spaceship theme. As they say on the website: it’s a physical game, so expect to feel like you’re really having to explore.

Unusually for escape rooms, there’s a central character that you interact with throughout the experience. Don’t worry: you won’t have an actor in the room with you, but Mac, your spaceship pilot, is on hand throughout the game to point you in the right direction. It’s a cool level of immersion that improves the experience in a number of ways. He’s part of the storyline, telling you what’s happening and allowing the designers to convey a sense of emotion about the experiences rather than the more impersonal choice of using a computer AI or getting you to read things yourself. There’s plenty more to Mac, though. He’s also a clue mechanism. Or at least I think he is. In truth, he blurs the lines between what is and isn’t a clue. It’s never clear when he helps you whether you’ve missed a signpost or if he is the signpost. And, well, there’s more still, but I’ll leave you to discover how the story plays out.

The set sprawls through the space sending you off in different directions to complete your objectives. At times, that’s a fantastic decision, and kids in particular are likely to have a great time. If you fancy a relaxing mental challenge, then you’ve probably come to the wrong place. This is an adventure, and you should expect to come out having worked up a sweat. While I initially appreciated that physicality and sense of exploration, with a team of two, one of whom really didn’t fancy the physical side of the game, it meant quite a lot of effort which ultimately became repetitive.

To be honest, that was more on our team makeup than on the room, but there was another form of repetition that was less welcome. Throughout the game, you have to replenish your oxygen. It’s a neat mechanism to keep more players occupied and enhance immersion but, for a team of two, it became increasingly tedious. I can imagine that being a lot more palatable with a group of four or five players, where the work is shared across the team. To their credit, there are a few different types of taskwork to make life a little more interesting, but I felt it needed more balance to tailor it to small teams.

There are plenty of puzzles to get stuck into, and I was impressed with how they’d managed to embed them into the game. They’d made good use of the sprawling nature of the set to encourage solutions involving communication, but there were other puzzles where they’d taken a simple, directed search and made it much more fun by the context in which we were undertaking it. Some were incredibly thematic, helping to pull us further into the adventure and feel like we really were trying to fix up the ship. For me, there was more to them than pure “follow the instructions” but, if that hybrid of puzzle and instructions is something you don’t enjoy, then be warned.

The biggest problem in the game was that, too often, we didn’t really know what we were meant to be doing next and were left floundering until we got a clue. Some of those were undoubtedly due to our lack of observation or small team size but, with a whole ship to explore, there were times when finding the next step meant searching round a large space. I’d have liked to see more pointers from puzzle to puzzle to help signpost us in the right direction and give the game a more natural flow.

The game started well and finished with equal style, creating a memorable ending that was exactly what you’d expect from this story. It was preceded by a simple but fun challenge that helped to get the adrenaline rushing and will likely create a nice level of pandemonium with larger teams. A great way to finish the adventure!

We escaped in seventy minutes having taken a fair number of clues. At times, though, it’s hard to know what’s a clue and what’s just part of the gameplay.

Spacescape is a high-quality game that I’d recommend playing. The puzzles are fun, but the real stand-outs for me were the sense of exploration during the experience, the humorous interactions with Mac and an interesting start and finish. While the game is good, be prepared for some elements that you may find a little tedious either because they’re repetitive or because they lack signposting. Hang in there and trust that your GMs will jump in to lead you back to the right path. It’s less about the tension of escaping here and more about enjoying the ride.

We played as a two and, while we got out with plenty of time to spare, I felt that this game would be best played with three or four. The taskwork is a fun diversion in a larger group, and I think the confusion caused by having a bigger team may actually add to the immersion.

We headed to Roost, just around the corner. It’s a bit expensive for a café-style restaurant and has an almost exclusively chicken-based menu but, if you’re OK with that, it’s an excellent choice: large portions, high-quality food and friendly service. I’d recommend the Cajun chicken burger and the Oreo milkshake.